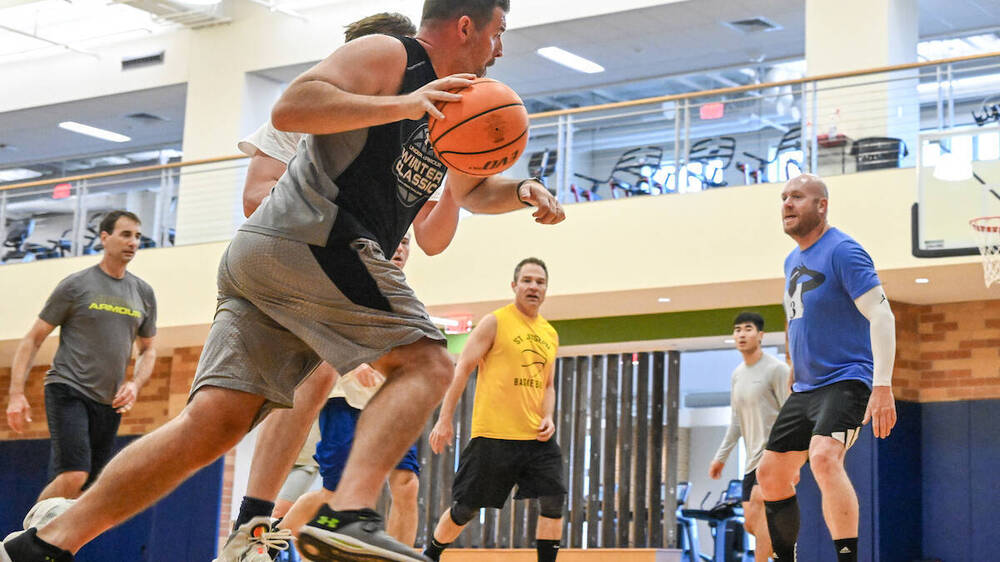 There’s one place where basketball is always in season — a never-ending noon pickup game with a roster largely made up of Monday-Wednesday-Friday regulars, with all newcomers welcomed.

Clark Power, a professor in the Program of Liberal Studies in the College of Arts and Letters, is an active faculty member and possibly the most senior basketball player on the court. At 75, he’s been playing pickup basketball for 40 of his 41 years at Notre Dame.

The 6-foot-tall Power played forward, back when he could more easily jump with the taller players. “But post-COVID, I really haven’t played much in the last two years. So now I just get out there to run around, have a little fun, take a few shots,” Power said. He admits he doesn’t play close to the basket anymore. “I’ve been through a couple shoulder operations. I have to take it easy.”

Still, he shows up, running the court with the other players. In a sport that can easily separate  players up and down skill range, the noon pickup game levels the playing field where age, title and ability are concerned.

This pickup game started sometime in the 1970s with casual games played in the “Pit” in the Joyce Center. Players have included faculty, staff, undergraduate and graduate students, community members, a provost, a University president and women’s basketball coaches Muffet McGraw and Niele Ivey. All of the players interviewed shared a common love of the game and the community of players.

The game moved from the Joyce to Rolfs Sports Recreation Center (now the practice area for the Notre Dame men’s and women’s basketball teams) before landing at a final home in North Dome. If a court at North Dome isn’t available, a group email lets players know where they will be playing, such as at Rockne Memorial ("The Rock") or at the Smith Center for Recreational Sports in Duncan Student Center. During COVID, the game continued with players meeting at the bookstore courts to play outside.

The makeup of the roster is mostly men, with Power on one end of the age spectrum and undergraduates on the other. The group tends to get more graduate students than undergrads. There have been a number of former men’s and women’s college basketball players and the occasional professional player.

There are no coaches or referees. Players call their own fouls, and if there’s a jump ball, they go with the last possession. Before a game starts, there’s a casual assessment of who should be “on” whom. Players substitute in or winners may take the next group.

For a continuous game that has been played three times a week for 40 years, communication has often been handled the old-fashioned way — by word of mouth. Many players were invited by someone else who plays. For Power, it was a matter of walking through the Joyce Center and someone asking him if he wanted to play.

Paul Brenner, senior associate director and professor of the practice at the Center for Research Computing, was working out at Rolfs in 2003 when he introduced himself to the lunchtime group. A post player, he’s on the court two to three times a week.

“ND is a great place to work because of our mission and community,” said Brenner. “The group strengthens my participation in that community. We all serve in different roles at ND, but we come together to improve our physical fitness, learn about each other and grow the community bonds.”

Jim Seida, an associate professor in the Department of Accountancy in the Mendoza College of Business, also found out about the group via word of mouth. He’s been playing as often as he can since 2003 and finds collegiality and the opportunity to exercise the greatest benefits.

“The best part is the ability to meet people from all across the University and in town,” Seida said. “I’ve met people that I would never have had a chance to meet if it wasn’t for basketball.”

Graduate student Matthew Smith joined the group in June, playing an average of two days a week. The shooting guard is working on his accounting master’s degree and was invited by Seida, his professor. Smith also finds the people to be one of the best parts of the game.

"They’re a really good group of people to play with and they make everybody feel included, no matter the skill level,” he said.

Matthew Mullin, a doctoral student in English, just happened to be shooting around by himself when he noticed a group of guys playing. He plays at least once a week, enjoying the full-court, five-on-five play.

“It’s as competitive as you want it to be. It depends on who you want to guard and who’s guarding you,” said Mullin. “And it’s a good group of guys as well.”

University staff member Dave Barstis, a senior systems engineer in OIT, has been playing with the group since he began working at Notre Dame in 1994. Co-workers who played the game encouraged him to join the group.

Initially hooping three days a week in the ’90s, he’s down to one day a week, giving his joints time to recover. It’s the camaraderie that keeps him coming back for more.

“I’ve made many, many friends here, including people who are not members of the University community. It’s networking throughout the campus. You get to meet other people in other positions.” That includes playing up against some ND legends. “I once blocked Father [Monk] Malloy’s shot once, back in the early days,” Barstis said, with a hint of pride in his voice. He is quick to concede it might not have been totally fair. “I was like 29 and he was 60-something.”

Barstis has also brought along new employees in much the same fashion that he was brought onboard. “You meet someone new, you find out that they’re into sports and into basketball and invite them to the games.”

The social and physical benefits of playing are undeniable. But for professionals working at computers most of the day, there’s even more to this ragtag pickup game.

“Additionally, it’s a mental health break from my day. You get away from the desk, away from the computers and electronics and you just get to come out here, get exercise and have a lot of fun,” Barstis said.

Barstis recalls a time when Nathan Hatch was the provost and how he played regularly with the group. “It was great because you felt like you could approach him and talk to him. It was really a family-like atmosphere that we had, getting to know him. You didn’t see him with his shirt and tie. You saw him as an equal. So it was great.”

Local physician Jon Chadwell acknowledges the benefits to the point of arranging his schedule to allow him to play once a week. He’s been showing up for 16 years, since moving to the area. He too was invited via word of mouth — by an employee’s husband who was on the faculty at ND.

At 50, Chadwell recognizes that his game has changed a little, laughing about his skill but admitting that he loves it. A fitness enthusiast who works out quite a bit, he counts his time on the court as part of his regular fitness regimen. “If I could play basketball every day and my body would tolerate it, I would do that. It’s a great workout.”

Notre Dame Magazine editor Kerry Temple, 70, played for a couple of decades until he was well into his 40s but was eventually sidelined with knee and hamstring issues. Yet, to talk to him is to be with him back on the court. He speaks freely of the friendships, the sportsmanship and just the sheer fun of the game.
“Playing out there — the closest thing I can use to describe the fun it was, it’s like being back in school and playing during recess. It was just a lot of fun.”
Interested in joining the pickup game? Email the ND Google Group:  ndlunchbb-list@nd.edu