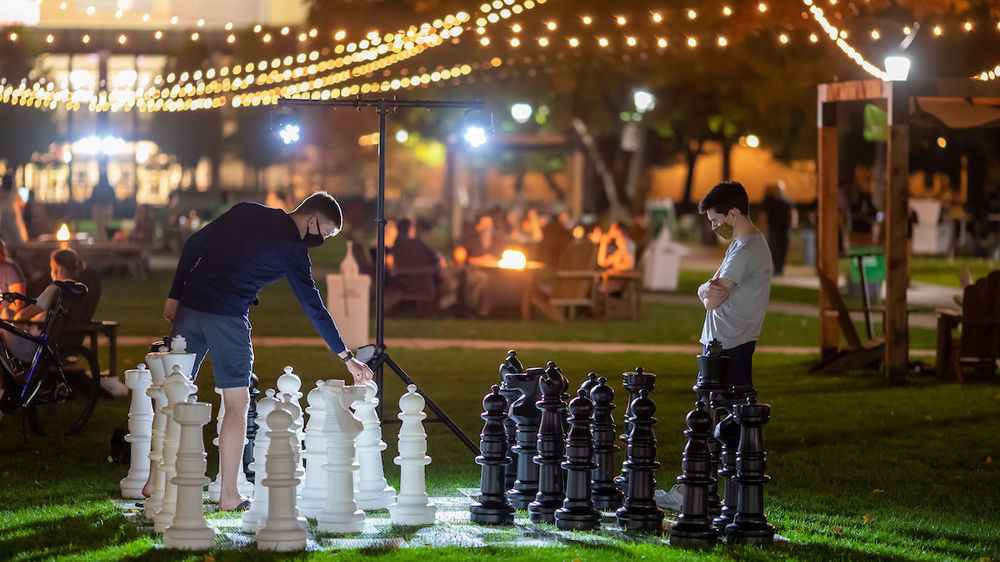 “This is the best day of my life,” is about the most honest, overheard statement expressing the sheer pleasure of a Chick-fil-A sandwich. Or at least it is if you are a first-year student who hasn’t had fast food since leaving home.

“I mean, honest to God, I haven’t seen Chick-fil-A since we left North Carolina. I’m really happy about this,” said first-year student Chris Libero as he clutched his sandwich.

On a night that brought joy to many students, Chick-fil-A served up 700 sandwiches, making it the best day ever for at least one student (that we know of). “They’re getting a little taste of home I think,” said Chick-fil-A Owner and Operator Edward R. Andres Jr.

Libero’s sentiments, whether spoken or intimated, were felt throughout the Friday night crowd at Library Lawn, the new locale for all things cool for students spending time outside on campus. With food trucks parked on the paved pathways, Library Lawn has become the gastronomic epicenter for students seeking food, fun and what some might see as a reward for persisting through the everyday rigors of living responsibly during a pandemic.

Making its debut in early September, the idea of Library Lawn was conceived out of necessity, giving students a much-needed respite from an uptick in COVID-19 cases that put them into a two-week pause from in-person activities at the end of August. Masked and outside, students found a new way to safely congregate in smaller group settings. (The CDC recommends outside activities because there’s less ventilation indoors and it’s harder to keep people apart.)

“The University was looking for ways to provide in-person, outside programming on a large scale,” explained Karen Kennedy, director of student centers, activities and events in the Division of Student Affairs.

“The idea for what would become Library Lawn was born from a brainstorming session with the HERE marketing team. That idea was shared with members of Student Government for feedback, then specific plans were made to bring in the Adirondack-style chairs, fire pits, Edison lights and pergolas, as well as planned programming to take place in the space six nights a week.”

Kennedy, along with Devon Sanchez-Ossorio, assistant director of events and services in the Student Activities Office, and Jennifer McGuire, program director of athletic advancement events in University Enterprises and Events collaborated with the President’s Office, the HERE marketing team, Student Affairs, Campus Safety and University Operations, Facilities Design and Operations, University Enterprises and Events and the Office of Information Technology, amongst others, to make it all happen — bringing the concept together in less than a week. Kyle Osburn, sport programs coordinator in RecSports, joined the team to coordinate recreation and fitness offerings, and eventually to oversee a team of student employees hired specifically to support the lawns.

The team had to consider a number of logistical details to make it all work, including: electrical needs; boosting Wi-Fi in the area; landscaping (adding grass-growing inhibitors); collecting additional trash;  St. Michael’s laundry pick-up and washing blankets for students; cleaning the furniture; the safety of the propane fire pits; even the timing of the sprinklers on the lawn. Ambassadors were also included, to make sure students were cognizant of the protocols around COVID-19.

The space was well-executed and well-engineered, even down to the number of chairs and spacing around the fire pits to ensure physical distancing. The overwhelming success of Library Lawn (and sheer number of students coming out) pushed for an expansion to the area west of the Hesburgh Library, where students find a more intimate setting of fire pits, tables and chairs. Both areas are cast in the soft lighting of strung Edison lights, turning what was once pedestrian spaces into inviting gathering oases.

Library Lawn is divided into three areas: the stage, the lounge and the green, according to Kennedy. “The stage serves as a space for student performances, concerts and contests. The lounge is the general hangout space with Adirondack-style chairs, fire pits and pergolas. The green is the space where yard games are available for student use and programs, hosted by student groups and campus departments, can be held.”

On this particular Friday in October, students found spike ball, corn hole, giant lawn games such as chess, checkers, Connect Four and dice for Farkle sprinkled about the south side of the library. The reflecting pool presented an opportunity to check out small motorized boats. And then there were the food trucks.

Students formed a line for Chick-fil-A before the truck even arrived. There were other trucks including one for cupcakes. All students needed to do was stand in line and collect their food — no payment necessary.

“A longstanding goal for us when offering weekend late night programming has been for it to be free of charge for students, so there's no barrier for some students to be able to participate,” said Kennedy.

Sanchez-Ossorio pointed out an added benefit of students not paying. “It reduces the amount of interactions. You don’t have to exchange money, credit cards or anything going back and forth, being passed off to anybody. You just get the food in an individual container and walk away.”

South Lawn (South Quad), a bigger space, gave students many of the same amenities and then some: firepits, tables, Adirondack-style chairs along with two double-glider-covered-swing-like contraptions that have students arriving early for a place in the “gondola swings” as described by McGuire. The larger area also has a giant tent for dining and activities, such as Disney trivia on this particular Friday night, and at the east end students can watch movies under the stars.

“South Lawn was a different project because we had to source so many Adirondack-style chairs,” explained McGuire who had to find additional chairs beyond those rented for Library Lawn. She found what she was looking for in Shipshewana, Ind., working with the Amish craftsman community, known for their woodwork. “They were so helpful and kind, and the chairs are extra heavy and of really high quality.”

Not to be outdone by Library Lawn, on Friday nights South Lawn serves up the kind of hot chocolate found in childhood dreams. Toppings include marshmallows, whipped cream, chocolate syrup, caramel drizzle, chocolate sprinkles – it’s all there, brought in by Campus Dining.

With three places to congregate and growing student buy-in, programming was amped up. “In addition to the programming that we provide, we have close to 500 recognized student groups at Notre Dame and most of them do programming. When we started this semester, they were looking at places they could use to safely program during COVID, with the guidelines that we provided them. We’ve seen them take an active interest in programming in these new spaces,” said Kennedy.

“The jazz band came and did a performance. Normally they would be traveling and doing performances around this time. This gave them an opportunity to have a showcase space,” said Sanchez-Ossorio.

A Star is born

The success of Library Lawn and the other spaces hasn’t gone unnoticed by the public at large. Students have shown support in Observer articles and the spaces have been covered by NBC News and Inside Higher Ed. Other universities have come calling as well.

“Devon, Jennifer and I have all received a number of calls from peer institutions,” said Kennedy. “They and their students think it’s awesome and they want to understand what it takes to actually make it happen.”

The questions include everything on the how-tos of food trucks, fire pits and programming. They even want to know where to get the chairs, a detail shared by McGuire after Notre Dame had what it needed.

“The landscaping is what shocks a lot of the schools I’ve talked to,” said Sanchez-Ossorio. “I mentioned that Landscaping came around and put a growth inhibitor on the lawn so that the grass wouldn’t grow as fast, so that they wouldn't have to cut it as often. Every time it has to be  cut, all of the furniture has to be moved off the lawn and then moved back. So, it’s the little things like that that nobody even thinks about in terms of the logistics of it all.”

While students may not be aware of the behind-the-scenes operations to make the outdoor spaces work smoothly, they do know that it works and makes a difference in their day-to-day lives. Kennedy said she’s learning from students how challenging this semester has been for them and their mental health and well-being. After the first weekend of Library Lawn, a student shared what it meant to her.

McGuire also had a student share with her about a rough midterm exam week and how being able to sit and listen to the live band (event) was just magical for her. “We are hearing amazing stories from students on how this is impacting them,” said McGuire.  “I had a student come up to me and say, ‘I feel so much better just being out here for a couple of hours.’ And so I think that not only is it a place where students are studying and they’re socializing with each other, but the ambiance of being outside has been a really important thing for our students’ mental health and well-being throughout the semester,” said Kennedy.

“I think it’s the best thing the pandemic has brought to campus,” said senior Lina Domenella. “There’s always something going on so there’s no pressure to feel like you have to have plans.

Senior accounting major Stephanie Stenger described Library Lawn as festive. “I also love it during the daytime, too. It’s like a really fun and happy place to come to and it actually makes me motivated to do my work. I think it's a really great idea and I really appreciate all the effort the University put into it,” said Stenger.