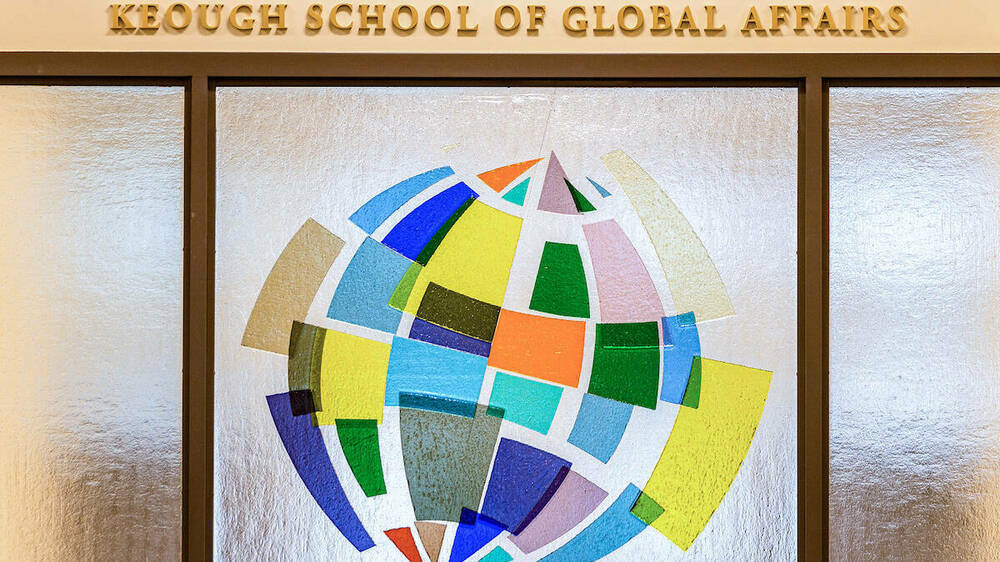 The family of Donald and Marilyn Keough, longtime University of Notre Dame benefactors, has made a $25 million gift to the Keough School of Global Affairs, a campus epicenter for global engagement. The gift dramatically increases financial aid for students in the Master of Global Affairs program.

“Don and Mickie Keough are towering figures in Notre Dame history, by virtue of their visionary leadership, generous benefaction and commitment to the University’s mission,” University President Rev. John I. Jenkins, C.S.C., said. “With the creation of the Keough Family Fellowships program by their daughters and sons, the great Keough legacy continues. Notre Dame is blessed by their support, and I am deeply grateful to this family which has been so dear to me.”

The flagship program of the Keough School, the Master of Global Affairs epitomizes Notre Dame’s commitment to educating a new generation of skilled, ethical leaders dedicated to fostering human dignity worldwide. With 58 countries represented and more than 60 percent of its students coming from outside of the United States, the program’s international makeup creates a rich and vibrant learning community. Since the Keough School opened in 2017, the program has produced 108 alumni and currently enrolls 78 graduate students.

“The Keough School’s MGA program provides exceptionally gifted students, many from low-income countries and modest backgrounds, a first-rate professional education grounded in a moral commitment to help enhance the lives and livelihoods of the most vulnerable,” Scott Appleby, the Marilyn Keough Dean of the school, said. “Yet again the extraordinary Keough family has embraced and helped fulfill Notre Dame’s mission of academic excellence in service to the common good, this time by guaranteeing that a calling to serve others need not come with a burden of insurmountable graduate school debt.”

The newly established Keough Family Fellowships continue the long and storied legacy of Don and Marilyn Keough, who both received honorary degrees from Notre Dame. Don passed away in 2015 and Mickie a year later.

Widely regarded as one of the most accomplished business executives in American history, Don served as the president, chief operating officer and director of the Coca-Cola Co. from 1981 to 1993. During his tenure, he oversaw one of the company’s most dramatic periods of international expansion. In 1986, he was elected chairman of Notre Dame’s Board of Trustees, a position he held for six years, and in 1997 he was named a Life Trustee of the University. He also was the recipient of the 1993 Laetare Medal, the University’s highest honor.

“Our parents saw in Notre Dame a commitment to the shared ideal of forming leaders of consequence who can build a better, more humane world,” Clarke Keough said on behalf of the family. “My siblings and I are humbled to see Dad and Mom’s vision come alive in the school that bears our family name, and these fellowships will carry on their legacy through the women and men willing to dedicate their talents, careers and creativity to build such a world in the 21st century.”

For decades, the Keough family has been instrumental in bringing the world to Notre Dame and taking Notre Dame to the world. Their tremendous generosity has gone toward the Keough School of Global Affairs and its home on campus, Rev. John I. Jenkins, C.S.C., Hall; the Marilyn Keough residence hall; Malloy Hall, housing the Departments of Theology and Philosophy; three library collections; and the restoration of O’Connell House in Dublin. They also have endowed the Keough-Naughton Institute for Irish Studies, several fellowships, the Keough School deanship and multiple faculty chairs — two in Irish studies and three that are known as Keough-Hesburgh professorships, which are awarded to scholars who both are world-class leaders in their field of expertise and demonstrate a commitment to the Catholic mission of Notre Dame.

Don and Mickie have six children — Kathleen Keough Soto; Shayla Keough Rumely, a 1976 graduate; Michael (1978) and Patrick Keough (1979); Eileen Keough Millard (1984) and Clarke Keough (1985). Shayla is a member of the University’s Board of Fellows and a Trustee, and Michael, Patrick, Clarke and Eileen serve on Notre Dame advisory councils.

The Keough School of Global Affairs advances integral human development through research, policy and practice; transformative educational programs; and partnerships for global engagement, building on the strengths of nine institutes and centers. It offers academic opportunities at both the graduate and undergraduate level, including a master’s degree and a supplementary major in global affairs.

The two-year Master of Global Affairs program prepares professionals for skilled, effective leadership and careers in government, nongovernmental and civil society organizations, and the private sector. It integrates rigorous professional training with extended, global fieldwork and close engagement with policymakers, multidisciplinary faculty and students from around the world working to address global challenges.

Originally published by Renée LaReau at news.nd.edu on November 05, 2021.