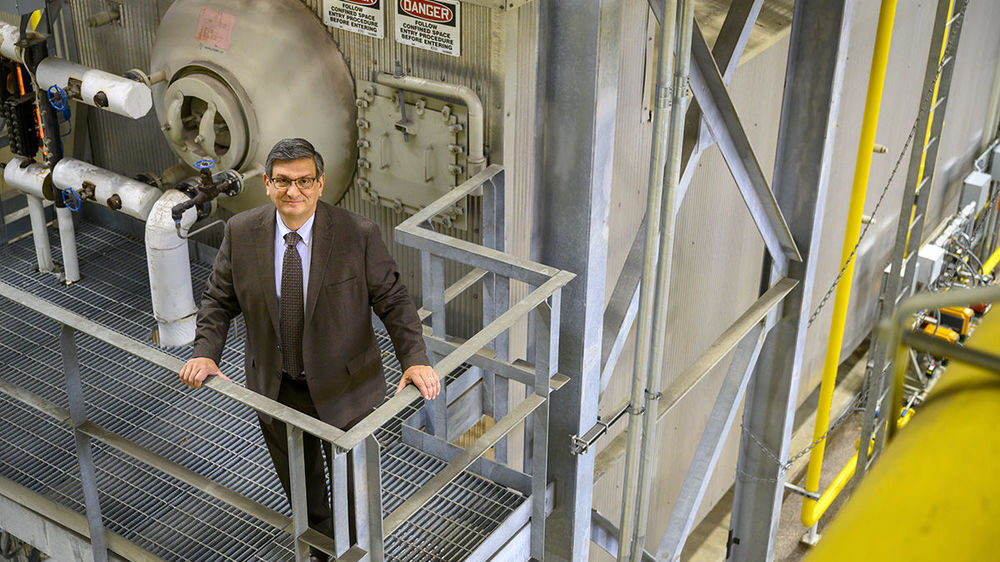 For Paul Kempf, assistant vice president for utilities and maintenance, studying and then working in electrical engineering at Notre Dame came second nature.

After all, he literally grew up on campus watching his dad do exactly the same thing.

After earning bachelor’s and master’s degrees in electrical engineering, Kenny went on to teach for the department and eventually directed operations of the Notre Dame power plant.

Young Paul would ride along with his dad on service calls when Kenny pursued a stint working for Koontz-Wagner, the University’s electrical contracting firm.

Even as a college freshman at Notre Dame, Paul would hitch a ride to campus with his father. At the time, Kenny was directing operations at the power plant. Paul would hang out there for an hour or so each morning before heading to classes. Employees would comment, “You’re going to come back here and run this place, Paul.”

That was the furthest thing from his mind.

But in Paul’s junior year, Kenny passed away. Paul, an only child, felt a responsibility to be close to his mother in South Bend. After graduating in 1980, he went on to work for Koontz-Wagner as an engineer in its custom controls division.

Notre Dame would eventually call him back home.

One fall day, Paul was helping the director of utilities for campus — a man who was once a student of his father’s and later became Kenny’s assistant in the power plant. They were providing electrical maintenance support for a football game. He asked Paul, “Would you ever want to come work at the power plant?”

Turns out, he would.

Paul started as the sole electrical engineer working in the utilities department on campus in 1989. He was appointed interim director of utilities in 1998, which became an official title in 1999. In 2013, he gained additional responsibilities as the director of maintenance. He was promoted to assistant vice president of utilities and maintenance in June 2019.

Paul’s goal is to be a good steward of the University’s resources while providing compliant, cost-effective and efficient energy for campus.

His predecessors did the same, putting into place a system that co-generated electricity beginning in 1953. The strategy has saved the University millions of dollars each year and has reduced its environmental footprint through increased efficiency.

In 2008, energy conservation became the focus. Over the next decade, conservation strategies reduced campus energy usage by nearly 20 percent, saving the University more than $20 million.

“We think long-term and aspirationally, using a forecast model that considers campus growth and energy production strategies to project needs for the next 50 years,” he says.

Despite considerable campus growth within the last decade, utility consumption has remained relatively constant due to the conservation gains. This means the actual energy consumption per gross square foot has reduced. Under Paul’s direction, emissions were also reduced, and sustainable energy measures were taken.

In 2015, a major request came down from University administration: Get the campus completely off coal.

Paul and his team had already been working toward an increased use of natural gas with a commensurate reduction in coal consumption. However, to completely walk away from coal was a big deal. He thought back to the 1970s oil embargo and the recent natural gas price spikes, and thought forward to the possibility of being cut off from both resources.

“When you see coal inventory on the ground, you can see and control your energy destiny,” explains Paul. “We wanted to reduce our carbon footprint. Fuel oil and coal have similar carbon impacts. While natural gas is approximately 55 percent as carbon intensive as the other fossil fuels, coal does the job at a quarter of the cost.”

Notre Dame Utilities has been shifting to renewable and recoverable energy.

Paul led the expansion of the University’s power plant, including the new East Plant that supports energy growth using efficient and renewable energy strategies. Through five geothermal heat recovery chillers, the East Plant provides campus with efficient and cost-effective heating and cooling as well as a thermal energy storage system that will meet the peak energy needs of campus. (See graphic.)

“We try not to make huge technology bets,” Paul explains. “We want to make sure we hold out for the right technology and we understand how to gain its full measure of effectiveness.”

No doubt his dad, Kenny, would be abundantly proud of his son and what he’s accomplished for their beloved Notre Dame.