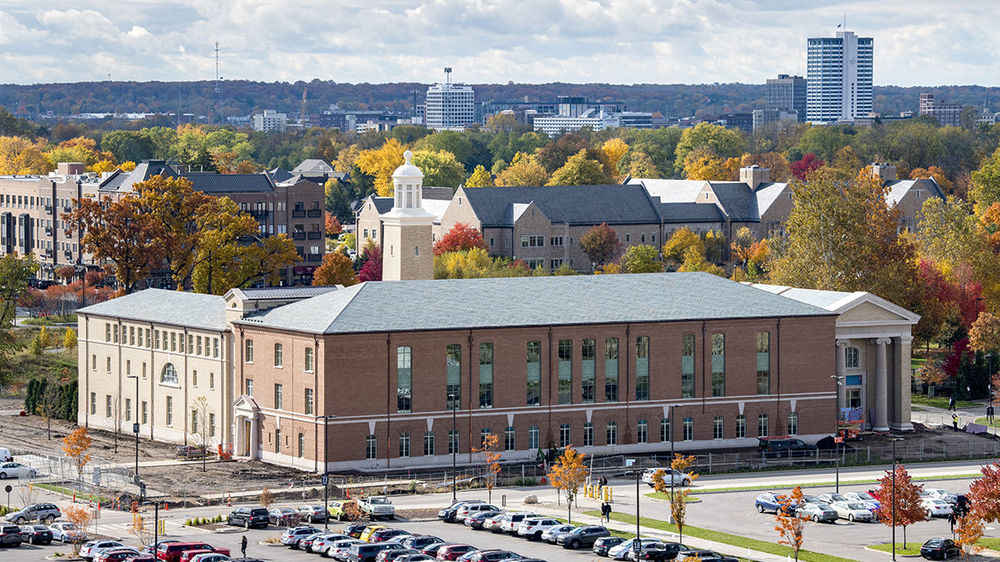 “The architect mirrors [the] creative work of God in designing and constructing the built environment in which we live and work.”
– President Rev. John I. Jenkins, C.S.C.

Walsh Family Hall of Architecture was designed to be an extraordinary building that people notice and talk about — and it is all of that.

The building’s three distinct sections create a stunning example of classical composition and urbanism, which reflect the foundation of the school’s curriculum and allow faculty and students to use the details of the structure as teaching and learning tools.

University President Rev. John I. Jenkins, C.S.C., noted in his homily during the building’s dedication Mass held in November what makes Walsh Family Hall of Architecture so special.

“The classical style creates buildings of enduring beauty to delight our eyes and uplift our souls. It is a style that connects us with the great architectural and intellectual traditions of the past — something particularly appropriate for a Catholic university,” he said, adding that the building’s exterior “reflects the principles of new urbanism ... a style that strives to provide buildings that are hospitable to its inhabitants, … conducive to the building of community … (and) does not drain or burden our earth but is in harmony with nature.”

Although Walsh Family Hall looks like three buildings from the outside, they are all connected, forming an urban assemblage. This creates a sense of a city or the hierarchy of what you find in a city, symbolized through architecture.

University photographer Matt Cashore picks up on that. He describes the building’s profile as reminiscent of the cityscape of Rome, where he went on assignment in 2014.

“I enjoyed Rome’s blend of styles, eras and materials — sometimes on the very same building. In a broad skyline view there’s a variety of colors and architectural elements. I get that same impression when I see the Walsh Family Hall of Architecture from the southwest, when I’m driving east on Angela Boulevard, for example. The tower, the red brick part of the building and the stone Hall of Casts all blend together in a glance that reminds me of Rome.”

“The new building is both a pedagogical tool for our students and a symbol of the architecture of memory and creativity.”
— Michael Lykoudis, Francis and Kathleen Rooney Dean of Architecture

Thoughtful design around every corner

Over winter break, the School of Architecture moved from Bond Hall, its home since 1967, to the new Walsh Family Hall of Architecture. Without missing a beat, the fall semester concluded in one building and the spring semester started in a new one across campus. 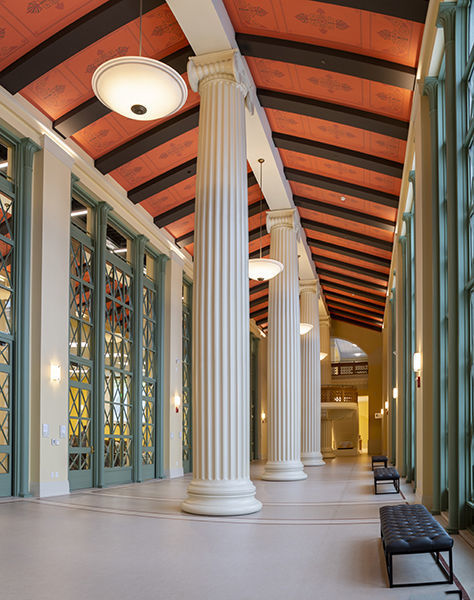 The new 100,000-square-foot building on the south side of campus was designed by John Simpson, a world-renowned architect in the classical tradition.

Classical architecture emphasizes proportion, harmony and balance, creating buildings of enduring beauty and timelessness. In turn, a focus on urbanism strives to build structures conducive to building connections and community where people can thrive.

Simpson described his design in this way: “The tower at its center heralds the location of the (University’s) new arts district. At the heart of any classical education in architecture is the Hall of Casts, and this has been given pride of place on the northwest corner, where it can be seen from campus when entering the University along Notre Dame Avenue, and also from Eddy Street. It is the most monumental building of the group and, in the manner of a chapel, contrasts with the more utilitarian characteristics of the adjacent studio range. As this is a school of urbanism as well as of architecture, the buildings together are an example of how public spaces are articulated — in this case forming a court, which recalls the religious origins of the University.”

The most elaborate of the assemblage, the Hall of Casts has a buff exterior and looks like a temple. Inside there is a 17-foot-high wall of plaster architectural casts that were used to create intricate and elaborate monuments and details for buildings.

A unique feature of the school’s five-year architecture program is that students must draw by hand for three years before they begin to use computer-assisted design programs. Assistant professor Giuseppe Mazzone teaches students to draw. He plans to use the Hall of Casts to support his graphics courses.

“Students have sketching sessions one to three times a week in the Hall of Casts,” says Mazzone. “In the new space the school’s extensive cast collection can be displayed, and the high ceilings and expansive space provide room for students to work and present their projects.”

A grand hall modeled after an ancient Greek stoa, lined with columns, links the main components of the structure, including the design studios, auditorium, library, exhibition hall and faculty office suites. An exterior plaza serves as the stoa’s outdoor counterpart, creating a space for community where students and faculty can gather and exchange ideas.

The tower articulates the central court, creating a public space alongside the stoa, open to Irish Green, with an amphitheater-like structure that can
be used for events.

The red-brick studio building resembles a factory, and it is, indeed, where hard work takes place. Here you will find two of three studio spaces and research labs. In the exhibition room off the stoa, a giant video wall will soon be installed to display student work. Faculty and staff offices are also located in the studio building.

Tall windows line the warehouse-like studio space allowing natural light to flood the room. The openness of the studios facilitates better communication between faculty and students. “The large rooms encourage more dialogue between students. That’s how architecture is in the real world,” Mazzone says. “The faculty offices are next to the studio space, allowing for easy collaboration with faculty, too.”

Behind every great architecture student is the library 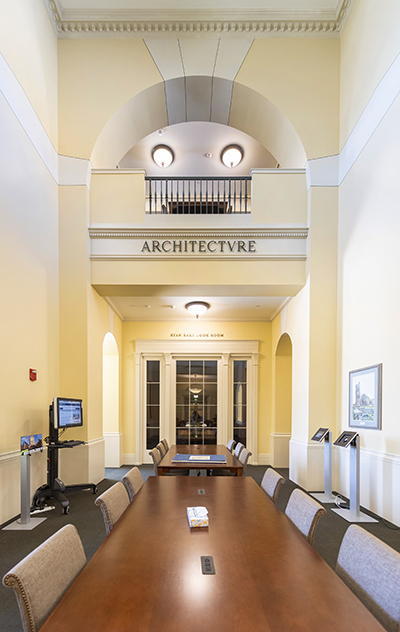 Upon entering the library, your eyes are drawn up toward the source of natural light and the Architecture sign that once hung outside the school's former building. before it was named Bond Hall.

The collections in the Architecture Library, one of the seven branches of Hesburgh Libraries,  help students learn and understand the classical principles used by early architects. Pupils study the great books of architecture so they are historically informed about how elements of architecture developed and why the elements are used in buildings.

This library gets a lot of student foot traffic, even before the move.

“Eighty-five percent of the collection has circulated since 2005, making the Architecture Library one of the most heavily used collections on the campus,” says Associate Librarian Jennifer Parker.

As vital as the library is to the architect student experience, it deserved, and received, a significant amount of design consideration.

When Parker began working with architects for the new building five years ago, she requested flexible spaces that created opportunities for both quiet and collaborative study.

“John Simpson in London, Stantec in Chicago, and the University’s project manager (architect) Craig Tiller really listened to us when we asked for truly functional space. They gave us everything we asked for,” notes Parker.

The resulting 14,000-square-foot Architecture Library is nearly two times the size of its former space in Bond Hall — enough space for more than 44,000 volumes on the public shelves, and over 130,000 linear feet of archival and rare book storage, allowing for many years of growth.

A special materials classroom with overhead projections allows students and faculty to work in close proximity to specialized collections. A state-of-the-art makerspace houses three large-format 3D printers to meet the needs of the school and the campus community.

The new space includes specialized archival collections and libraries including the Léon Krier Library and Archives and the Léon Krier Reading Room, the 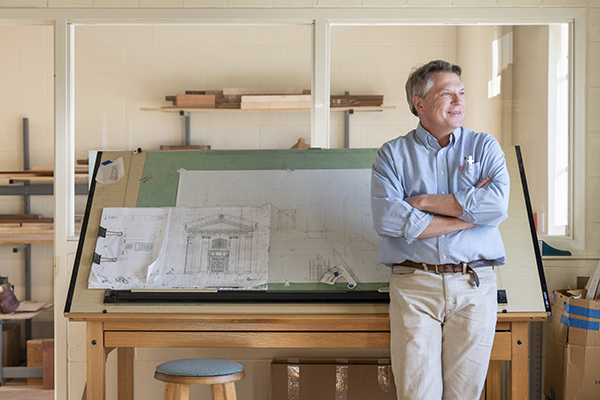 Bob Brandt, professor of the practice who heads the furniture design concentration, was heavily involved in designing the new furniture studio, which opens up to an outdoor space where students will be able to bring furniture to finish/stain. His former teaching space and studio had been in the West Lake Design Studios for the past five years, not in Bond Hall, so Walsh Family Hall of Architecture reunites the furniture program with the rest of the School of Architecture.

One of the advantages of reintegrating furniture design with the rest of the architecture program is that it brings it back into the general discourse of faculty and students. “Faculty are very curious about what my students are working on,” explains Brandt. “And students not actively participating in the program can stop in at various stages of the process. They can watch the pieces transform throughout the semester.”

Although he will miss looking out over St. Mary’s Lake and the easy collaboration he had with his colleagues in the industrial design program, Brandt is delighted with the new space in Walsh, especially his studio. “It’s my favorite place,” he said. “I’m slowly personalizing it with some of my favorite tools that I got from my father and grandfather, who were machinists, and that I used as an MFA student. I think it is important for students to see a working studio.”

The new space has two rooms — a bench room and a machine room. “I love teaching in this space,” says Brandt. “I used to have to try to instruct students working at their benches over the roar of machines in the room, and students are no longer constantly exposed to the noise of the machines the entire time they are working on their projects.”

Students will also be able to present their completed pieces in the same building where they are created. “No more dragging furniture in all types of weather up the hill to Bond Hall,” he says.

Brandt believes the new environment will be a better experience for his students, enhancing their learning and creativity.

Likewise, Walsh Family Hall of Architecture is a very special place where tomorrow’s architects can pair creativity with an enduring tradition and an emphasis on building community. In turn, they will carry these principles forward into their work, designing communities that will flourish long into the future.

The Hall of Casts 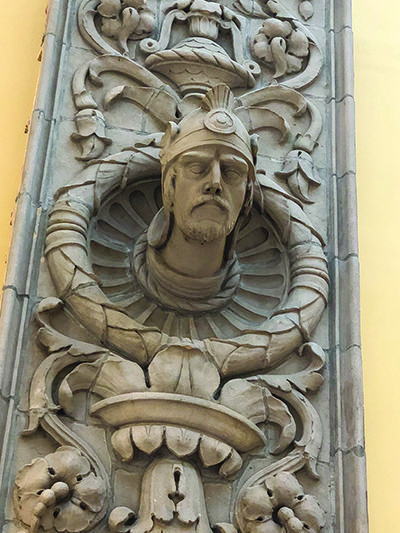 The Hall of Casts has a buff exterior and looks like a temple. Inside, the 17-foot-high walls offer ample space to display architectural casts, some of which were elements of actual buildings. The charcoal grey specimens, distinct from the plaster and alabaster pieces, were salvaged from a building in New York City that was demolished for new construction.