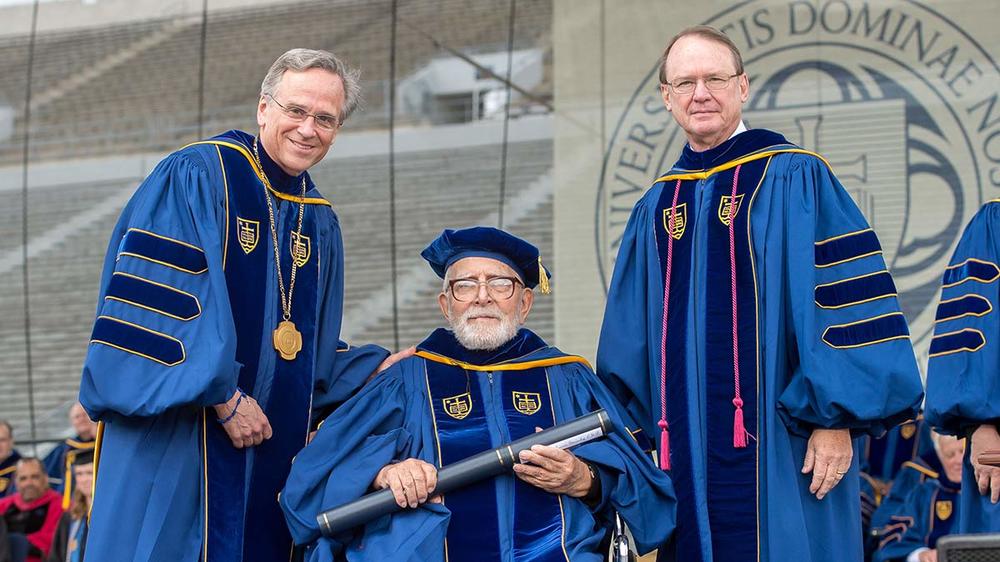 “Father Stransky’s contributions to religious dialogue and unity were immense, including his leadership of our Ecumenical Institute,” said Rev. John I. Jenkins, C.S.C., Notre Dame’s president. “We join with the Paulist community in mourning his passing while redoubling efforts to deepen understanding and foster dialogue — as he did — among believers of all faiths.”

The Ecumenical Institute is a Jerusalem-based center of theological scholarship and learning that was founded more than 50 years ago by Pope Paul VI, who turned administration of the institute over to Notre Dame. In addition to its academic programs, the institute promotes dialogue and exchange among Christian denominations as well as other religions, especially Jews and Muslims.

Father Stransky led the institute from 1988 to 1999 and continued on the staff until 2008. He received an honorary degree from Notre Dame in 2015 for his work as a “bridge-builder of unusual intellectual courage” who “guided the Catholic Church’s historic deliberations on the deepening of its relationship first to the Jewish people, and then to all non-Christian believers.”

A native of Milwaukee, Father Stransky was ordained a Paulist priest in 1957. As a young staff member of the Vatican’s Secretariat for Promoting Christian Unity, he played an instrumental role in the writing of one of the Second Vatican Council’s most important documents, the 1965 Declaration on the Relation of the Church to Non-Christian Religions, also known as “Nostra Aetate.”

Considered one of the most eminent ecumenists in the Catholic Church, Father Stransky served as president of the Paulist fathers from 1970 to 1978, leading the community that was founded in the 19th century with the mission of converting America to Catholicism away from an openly proselytizing stance toward other Christians and toward an emphasis on mutual respect and theological exchange as the most effective means of attaining Christian unity.

Originally published by Dennis Brown at news.nd.edu on September 05, 2019.