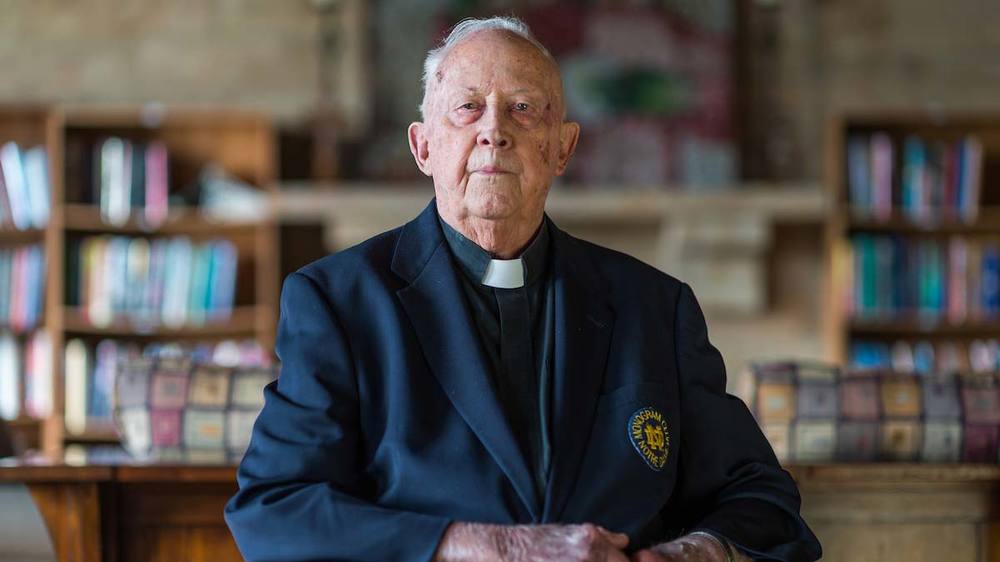 Father Pelton was an expert on liberation theology — in particular its roots and impact in Latin American countries — and he published extensively on the life and legacy of St. Óscar Romero, the storied archbishop of San Salvador who was assassinated by rebel forces in 1980. In October 2018, at age 97, Father Pelton traveled to Rome to attend Romero’s canonization ceremony in St. Peter’s Square, and his expertise on the new saint was featured in news coverage by Zenit, the New York Times and The Guardian, among others.

“Few people have served Notre Dame with the same dedication and energy as Father Bob. His record of service sheds a lot of light on the genesis of almost all the ecclesial institutes we have around us today,” said Peter Casarella, associate professor of theology at Notre Dame and former director of LANACC. “From its inception, Father Bob dedicated LANACC to ‘reverse mission.’ He believed that gringos such as himself had more to learn from Latin America than Latin Americans were going to learn from him.”

A native of Evanston, Illinois, and a 1945 graduate of Notre Dame, Father Pelton was ordained a Holy Cross priest in 1949 and received his licentiate and doctorate in sacred theology from St. Thomas University in Rome. In 2016, he received an honorary doctorate from the University of Portland in recognition of his career as a filmmaker, scholar, author, theology professor and globetrotter, as well as his “lifelong commitment of service to Latin America and the Latin American Church.”

During the 2016 University of Portland commencement ceremony, Father Pelton was praised for his recent scholarship on Blessed Óscar Romero, the martyred archbishop of San Salvador, and for producing the award-winning documentary film “Monseñor: The Last Journey of Óscar Romero.” He also was honored for the role he had played as a peritus or theological adviser to Cardinal Leo Suenens during the Second Vatican Council in 1965, and as a journalist covering the visits of St. Pope John Paul II to Latin America and the conferences of the region’s Catholic bishops, including the 2007 meeting in Aparecida, Brazil, whose final report was overseen by Buenos Aires Archbishop Jorge Mario Bergoglio — now Pope Francis.

Father Pelton took five trips to Cuba and was particularly interested in the house churches there that enabled lay participation in the Church. The related Notre Dame course, “Between God and the Party,” was taught by Father Pelton and Casarella and provided students the opportunity to talk with Cuban youth and learn about U.S.-Cuban relationships and the global expanse of the Catholic Church.

At the same gathering, Notre Dame’s President Emeritus Rev. Edward A. Malloy, C.S.C., proposed a toast, recalling Father Pelton’s service in Chile during the 1960s and ’70s as rector of St. Georges College, an elementary and secondary school administered by the Congregation of Holy Cross; as a member of the theology faculty of the Catholic University of Chile; and in various administrative posts in the Santiago archdiocese. “The role Bob played in the Catholic Church in Chile during a very important period of that country’s history was equivalent to that of an acting bishop,” Father Malloy said. “He has been a global citizen, a manifestation of the Church international, and a true advocate of the vision of Vatican II.”

Father Pelton acknowledged that “the Council, or, rather, the Holy Spirit at the Council, deeply affected my outlook on the Church and the relationship between the hierarchy and Catholic lay people. It began to seem to me much more important to understand and experience what was going on at the grassroots of the church, and I felt myself more and more drawn in that direction.”

During his pilgrimage to the canonization of St. Romero, Father Pelton acknowledged the deep damage of the clerical sex abuse crisis and prayed that Pope Francis would promote Romero as a pastoral model — for the bishops of Latin America, and also the global Church. “This moment provides a unique opportunity for the Church’s official leaders to accept a clear call from the Gospels, together with the affirmation of a committed lay leadership,” he said.

A vigil service for Father Pelton will be held at 7:30 p.m. Thursday (Nov. 7) at Moreau Seminary Chapel on campus. A funeral Mass will be celebrated at 3:30 p.m. Friday (Nov. 8) at the Basilica of the Sacred Heart.

Originally published by Notre Dame News at news.nd.edu on November 05, 2019.