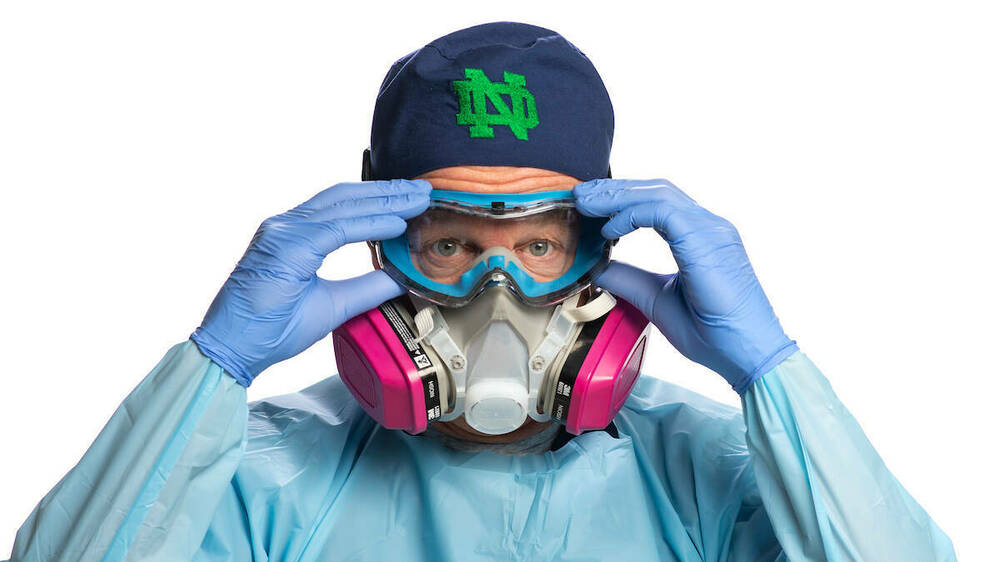 Joe Holt is a lot of things, but he’s not average.

He is an Irish Catholic from the Bronx; a former Jesuit seminarian and priest; a multilingual scholar, with degrees from Boston College, Fordham University, the Pontifical Gregorian University in Rome and Harvard Law School; a former gym teacher, bartender, stockbroker and corporate attorney; a triathlete; an empath; and the Audrey M. and James E. Jack Professor of Business Ethics in the Mendoza College of Business.

A man with divergent interests and experiences, Holt wondered how he could best help during the worst of the pandemic in 2020.

“I knew in my heart immediately,” Holt said. He was needed on the front line assisting nurses who were caring for the most critically ill COVID-19 patients.

In his early 20s, as a Jesuit novice, Holt ministered as a nurse’s aide caring for terminally ill cancer patients. Holt felt so connected to the work, he continued it throughout his 12 years as a seminarian and priest and again when he came to Notre Dame in 2004, volunteering in a local hospice.

“It’s wonderful to be a Notre Dame professor, but every now and then it’s good for my Bronx Irish Catholic soul to be the guy who empties bedpans, makes beds and takes out the garbage,” he said.

Holt’s Jesuit training was spiritually foundational. “Jesuits are characterized by what I call a holy restlessness to do not just a good thing to help, but the best possible thing you can do given your knowledge and skills and what the most pressing needs are in the world.”

As a Jesuit, Holt was dispatched to places around the globe.

“I was in Nicaragua during the Contra War, in El Salvador at the time of the death squads and in a hospital in a leper colony in Nigeria,” he said. “Even after I left the Jesuits, the summer after my first year in law school, I did human rights law in Belfast, before the ceasefire when things were still blowing up there. I’ve always felt called to be where the world is hurting the most and try to help in some small way.”

This time the crisis was COVID-19 and the location was right here at home. While Holt had the volunteer experience as a nurse’s aide, he was not certified, and he couldn’t get to the front line without certification. That’s where Gov. Eric Holcomb came in.

“The governor wanted to find a way to get more people to the front line in an expedited fashion, so he authorized an abbreviated course for getting a personal care attendant (PCA) certification. It was a recognition that there’s an incredibly pressing need in the community to which I belong. I thought, ‘I have some experience and skill in that area and I could help, and there’s a piece of paper that can get me there.’”

So Holt got his PCA, and by April 2020 he was ready to help, assisting in an intensive care unit in Chicago, a COVID-19 hot spot, while Notre Dame classes were all online.

“At that time, about 20 percent of COVID cases were front-line health care workers. There was no vaccine yet, and health care workers faced a constant risk of serious illness or even death. I had faith I’d be fine, and I decided I’d rather die doing what I think I should be doing in life than live controlled by fear,” he said.

Nobody knew how long the pandemic would last.

“It got somewhat better that summer, and then in the fall, it got bad again. When I saw that happening, I decided to get the (more specialized) certified nursing assistant (CNA) training.”

By the time Christmas break came along, Holt was a CNA.

“Since we had started the academic year super early that August, we had about a two-month Christmas break. I heard that hospitals in Elkhart County, just east of us, were slammed with patients. I contacted one to see if they could use my help and they warmly accepted the offer.”

He spent six weeks volunteering at a Goshen hospital. For protective reasons, he had to live apart from his wife, Meghan, who was caring for her elderly, immunocompromised mother in their home outside Chicago.

After his two stints in ICUs, Holt thought, this time, the pandemic was surely winding down. But the delta variant arrived, and Elkhart County hospitals were slammed again.

“They told me they were overwhelmed with patients and woefully understaffed with more and more nurses and nurse’s aides falling ill or leaving the ICU or the nursing profession.”

So for a second Christmas break, Holt suited up in protective gear that included a heavy-duty respiratory mask and volunteered for the worst shifts — including night shifts on Christmas Day and New Year’s Eve.

“In a world in which we are encouraged to seek the finer things in life, Jesuits believe it can be spiritually beneficial at times to choose what is the lowest. I took as many unpleasant tasks off the nurses’ overflowing plates as I could, like emptying bedpans and taking out hazardous waste, and making beds with people who were incontinent still in them and caring for the bodies of the dead.”

Following that third stint, Holt made a post on LinkedIn that included this sentiment: “My admiration for the nurses and others who work full-time on the front lines of the pandemic only grows. They are warrior angels who display a hidden heroism in places few ever see and have fought a long and hard battle with no end in sight. And they are tired. The suffering of the patients is unspeakable and heartbreaking to see day after day and the sorrow of their loved ones is great. Please say a prayer for the patients and for the nurses and others who risk their health and lives to care for them.”

Included with the post were photos of the professor standing in a hospital hallway donning a scrub hat with the Notre Dame monogram.

Notre Dame alumna Georgianna “Jordy” Shoemaker, an ICU nurse in Boston, noticed the post, probably because she has the same scrub cap.

“I read his post and I was just speechless. As a nurse, I thought, he gets it. But I couldn’t believe that this professor who probably had a million other things going on would go to that length to become trained in a new field and then go help. I just had to talk to him. So I shot him a message,” Shoemaker said.

That message led to Zoom calls and, this spring, they will meet in person when Shoemaker returns to campus to host the annual Notre Dame women’s lacrosse Daughters for Dads fundraiser for the Harper Cancer Research Institute in memory of her father. She can’t wait to meet Holt.

“I think he epitomizes servant leadership. He is a walking example of what Notre Dame stands for: being a force for good in the world,” she said.

Holt believes each of us can be a force for good. “Ask yourself: What pressing need in the world moves your heart so much that you’d be willing to make some sacrifice to address it? None of us can relieve all of the world’s pain, but all of us can relieve some of it. It’s good to do that."