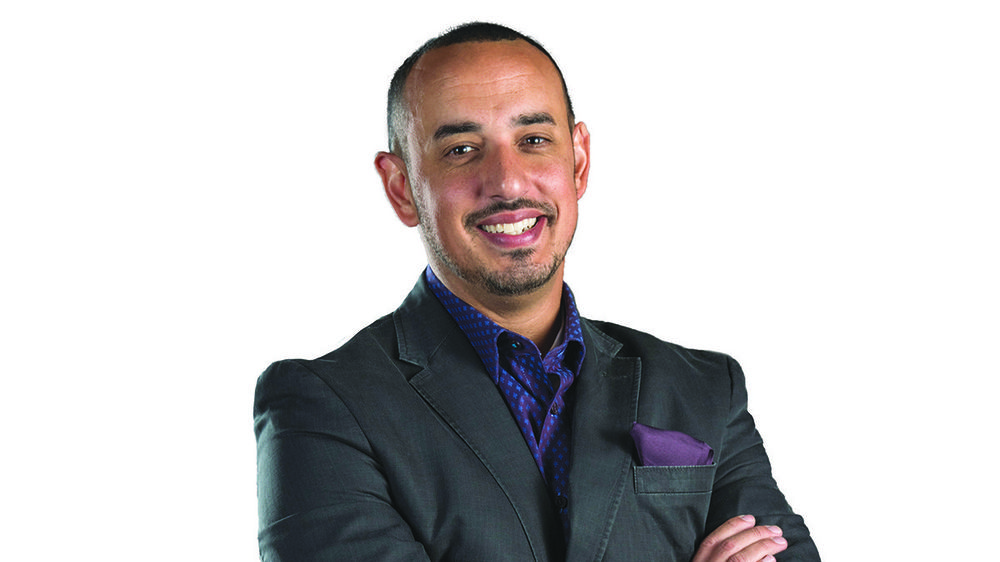 Alex Ambrose grew up in New Jersey, in a middle-class suburb across the Hudson River from Manhattan. While New York City is cosmopolitan, his hometown was not.

“I didn’t look like most of my peers and I remember being very resistant to labels and boxes and simple reads on me and my ability,” he says.

As a sixth-grader, Alex sensed that standardized testing was one of those “simple reads.”

“I knew what they were trying to do,” he says of the educational system. “They were attempting to assess and evaluate me, not to help improve my learning but instead to judge me, rank me and track me based on an ‘IQ score’ from a multiple-choice test.”

Back then, such “bubble sheet” tests also asked students to select one race. Alex is biracial.

“I knew that the purpose was to label me so they could compare me to others in my class, state, racially and nationally. I felt additional pressure and weight on my shoulders that I was representing the minority part of my background.”

“I convinced a fifth of my class to ‘Christmas-tree’ our bubble answer sheet with ABCDCBA.”

“I was sitting in ‘Gen Chem’ course first semester of my first year at Cook College of Science at Rutgers, and fell victim to the bell curve of the midterm, which sent me a clear message that I didn’t belong there,” he says.

Alex sought to right the wrongs he saw in the educational system. He holds a bachelor’s degree in developmental psychology and a master’s in elementary education from Rutgers. Later he earned a doctorate in education technology from Nova Southeastern University.

His expertise and lived experience serve him well at the Kaneb Center for Teaching and Learning, where he leads the Research and Assessment for Learning (ReAL) Design Lab, always seeking ways to help
students learn and demonstrate
what they know.

Finding his way at Notre Dame

Alex and his wife, Laura, came to the South Bend region 10 years ago when Laura accepted a tenure-track position at Saint Mary’s College. At that point, Alex had earned two of his four degrees, served in the Iraq War and worked as a fourth-grade teacher in Detroit.

Notre Dame offered him a one-year position in ROTC teaching students about military leadership. That was a good fit, but even with a master’s degree in hand, Alex felt like an outsider in academia. His peers were faculty with doctorates.

A year later, he took on another temporary position, this time as an academic adviser.

“Through the job, I got involved in the Balfour-Hesburgh Scholars Program. It’s targeted to work with first-generation college students from underrepresented groups.”

Hugh Page, vice president and associate provost for undergraduate affairs and dean of the First Year of Studies, was his boss and became a mentor.

“Hugh was very supportive about me working toward my Ph.D. and applying my dissertation to a
real-world problem that we had in our office: how to close the achievement gap for some of our students,” he says.

Alex studied how to use data to identify the first signs that a student is struggling in order to offer intervention to help the student succeed.

After Alex finished his doctorate, he joined Kaneb, working for Kevin Barry, another mentor.

“Kevin gives me the flexibility and support to attack traditional assessment in an authentic and inclusive way,” Alex says. “He has been very supportive of us scaling up our learning analytics initiative, one that takes on a challenge of maximizing opportunities for all students to thrive.”

The initiative started with looking at data connected to how students were performing in the Moreau First Year Experience course.

“All 2,000 first-year students take the same course with the same homework assignments, so that is the control,” says Alex of the research he led.

“We found that while 98 percent of students turned in their homework, 2 percent didn’t turn in assignments during the first six weeks. We found that is predictive that they were not going to get a good grade in that course, which correlates to how they will do overall in the first semester.”

Over the three years of the study, they found that intervention works.

“Eighty percent of those who were struggling early improved their grade two or three letter grades by the end of the semester.”

The initiative is now being scaled up to 10 of the top 16 credit-granting courses.

Taking his expertise to the Middle East

Alex could never have predicted that his professional life would also help him right wrongs he observed in the Middle East.

For the past two years, he has contributed to a Notre Dame project with Afghanistan’s Balkh University to launch a master’s program. Educating and developing the Afghan workforce could stabilize the economy and bring peace and prosperity.

“I have seen firsthand that the military may seek to destroy terrorists, but education is the best chance of destroying terrorism,” Alex says. (Read about the Balkh project.)

Looking back at his sixth-grade self, Alex feels some satisfaction in where life has taken him.

“The educational system told me I didn’t belong, I didn’t fit in, I wasn’t prepared,” he says. “If I’ve helped tear down walls for students, that is the reward.”

Editor’s note: “I am ND” is a new series showcasing the rich diversity of the faculty and staff at the University of Notre Dame. Colleen Wilcox with Notre Dame International contributed to this story.

Originally published by Gwen O’Brien at news.nd.edu on September 27, 2018.