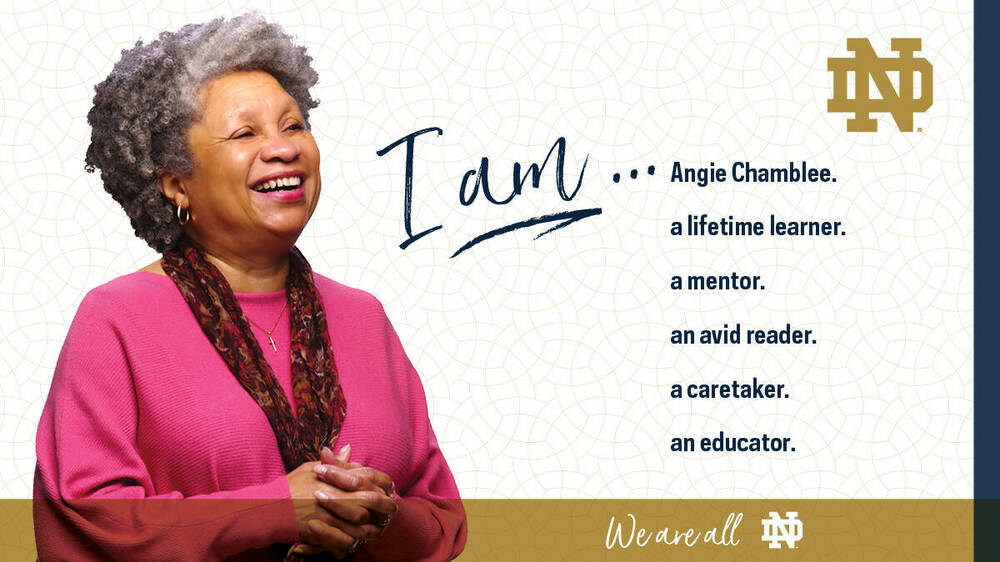 Editor’s note: In the fall of 1972, the University of Notre Dame began admitting undergraduate women.  This is the story of one woman who graduated in 1973.

In 1969, two accomplished parents dropped their daughter off at Saint Mary’s College in the hopes of giving her a promising education. Angie Ricks Chamblee, the oldest of four kids, remembers thinking, as she stepped onto the campus, far away from home for the first time, “Oh my God, I’m alone here.”

By the time Chamblee came to Saint Mary’s, there had been long, in-depth talks of Notre Dame and Saint Mary’s merging. But these discussions dissolved at the end of Chamblee’s junior year in 1972 and instead of a merger, Notre Dame opened its doors to women, and Saint Mary’s remained an all-women’s school.

“I had always assumed we were going to graduate from Notre Dame because when we were admitted (to Saint Mary’s), that was the understanding,” Chamblee recalled. “That was (why) I applied. Herman Hooten, a neighbor and a freshman at Notre Dame when I lived in Tuskegee, Alabama, told my parents about the schools merging. I had no thought of going to a single-sex school for college.”

Fortunately, the end of the merger discussions did not change the outcome. It took some time before the dust settled on the administrative side, which left some women to wonder which school they would officially receive a degree from, despite having taken classes on both campuses for years prior. And for a few, like Chamblee, their accredited majors existed only at Notre Dame.

“They did not technically transfer us to Notre Dame until May of our senior year,” Chamblee said. She graduated in 1973 with a degree in psychology from Notre Dame. She didn’t have to ask or petition to graduate from Notre Dame; it was simply a matter of her major existing there, and not at Saint Mary’s.

Before women were officially admitted to Notre Dame, they were integral to campus life here. Chamblee recalled: “My class of women who were at Saint Mary’s always considered themselves a part of the two-school community. Our IDs had both the University of Notre Dame and Saint Mary’s College on it. We were able to take classes at whichever campus we wanted, eat in each other’s dining halls, share the same libraries. So there was never in my mind a difference between the schools. The only difference was the men lived on this campus and the women lived at Saint Mary’s.”

In preparation for the first freshman class of women to live on Notre Dame’s campus, some men were moved out of their residence halls to make room for them. Chamblee did not see living on campus worth the hassle it would have caused in her final year.

“They offered us all the opportunity to move to Notre Dame, but by then, I had a single room. I didn’t want to deal with male alumni knocking on my door in anticipation of showing someone their old dorm room and find me. ... Surprise. Many would be upset because their dorm had been sacrificed for the women. So, why deal with that when I had a beautiful single room with an attached bathroom at Saint Mary’s?” Chamblee reflected.

During the same time period, protests against the Vietnam War erupted on university campuses nationwide. As one of a handful of Black women on campus, striving to make the most of her education, Chamblee remained focused entirely on schoolwork. Her father, an immigrant from Liberia with a doctorate in chemistry, always emphasized the importance of education. The expectation was for her to excel in the classroom.

“Although there was unrest going on around campus on the one hand, on the other hand, I didn’t feel I could take part in protests because the pressure was on me to go to classes, make good grades and get out of school in four years so I could move on to graduate school,” Chamblee recalled. “I was in survival mode. I was so overwhelmed that to be involved in anything outside the classroom seemed a luxury I didn’t have.”

In the classroom, Chamblee found herself one of few female students, if not the only one. Because there were so few women, there was an instant camaraderie — a sense of relief when she’d walk in to find another woman in class. This relief even bridged a racial divide that often existed on both campuses, outside the lecture halls.

“But in terms of social life, there was an unspoken racial division,” she said.

Chamblee said that generally on campus and in classes, everyone was very polite, but there was little socialization between Black and white students outside of the classroom. She recalled a particular moment that stood out to her:

“When I went into the dining hall for the first time, I promised myself I would sit at the first table with an open seat. I wasn’t going to be a person who sat at the Black table or the white table, I was just going to be a person who walked into the dining hall and got along with everyone. I can remember the young white women at the table were laughing jovially and having a lively conversation. But when I sat down, gradually everything went quiet. Slowly every person got up and left the table, and I finished my dinner alone.”

After graduation, Chamblee never thought she would call South Bend home again. But after completing graduate school, she married her college sweetheart from Notre Dame, and the couple returned to town in 1974 when he started law school at Notre Dame. She eventually came back to campus in 1976 to work in the Freshman Year of Studies (FYS) office. She spent 38 years with the University in various positions within FYS, beginning as an academic adviser and then moving into assistant dean, associate dean and senior associate dean positions.

“Working directly with students was always the best part of my job. I always tried to provide an impartial ear — listening to their concerns about classes, life and everything in between. I worked to refine the academic support services for first-year students and to provide a welcoming, supportive and safe space for students in their decision making, while offering guidance.”

When asked what inspired her to stay 38 years, she simply said, “It may have started off as just a job, but I found I thoroughly enjoyed working with the students.”

Chamblee’s commitment to her students was born from her own student experience.

“When I was a student, I had no mentors. That’s why I think I enjoyed the FYS work so much — what we in FYS were able to provide to each and every individual student was the type of support that I felt would have helped me as I was going through my four-year journey at the University.

“In many ways it was like reliving what a first year of college should be like. I hope I helped a lot of students make a more successful transition from high school to college than I did. Being a mentor to first-year students was a very fulfilling experience for me.”