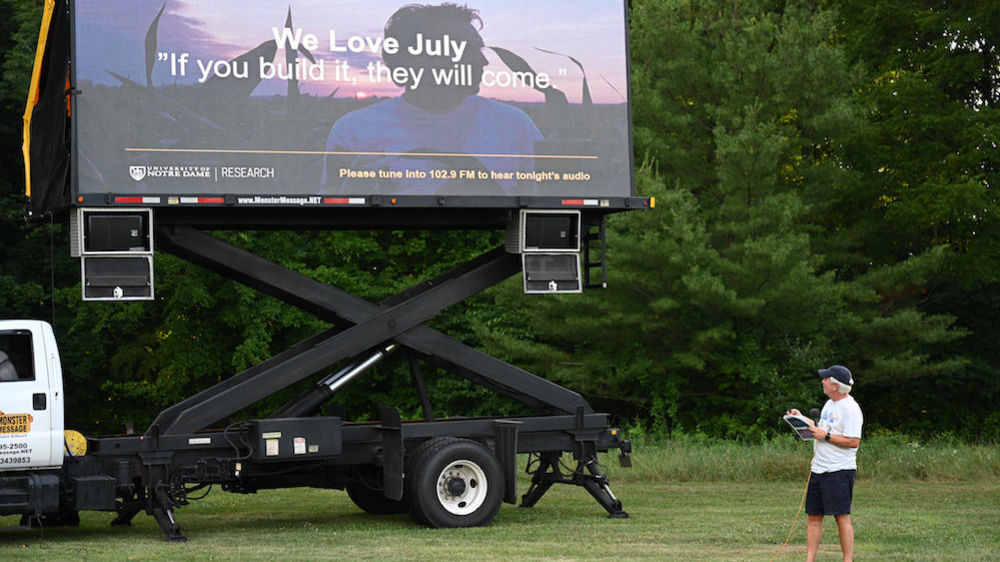 Editor's note: On July 7, Bob and Deb Bernhard hosted the annual We Love July celebration for Notre Dame Research (NDR) faculty and staff via a pop-up drive-in movie at St. Patrick’s County Park. Unfortunately, due to the coronavirus, the event had to be reimagined. In this Q&A with NDWorks, Bob Bernhard, vice president for research, explains the tradition of the We Love July celebration and its role in workplace culture development within NDR.

For those not in NDR, could you describe what the annual We Love July (WLJ) event is all about?
Since coming to the University of Notre Dame, it has always seemed like July was a good time to step back, assess accomplishments of the past year, and prepare for the coming year. Although most NDR staff are busy year-round, business seems a little less urgent in July, making it the best time in the academic year to celebrate successes, get excited for the future, and look forward at the big picture.

The WLJ celebration is our way of doing that. NDR employees and their families are invited to spend time with one another in an enjoyable, relaxed atmosphere. Besides recognizing staff for their achievements, the event is meant to be light-hearted and fun. In previous years, the WLJ party has included a picnic at McCourtney Hall and a barn party at a park, for example. There is always food and entertainment for all ages.

July also happens to be my birthday month so I have many fond memories of fun in July! Who wouldn’t love to throw a big birthday party with all of their wonderful colleagues?

Why did you decide to host the drive-in WLJ celebration?
This year we had originally planned a family outing at one of the city parks, but with physical distancing protocols and the University’s financial guidance that was no longer possible. As we brainstormed for an alternative, NDR Officer Assistant Susan Tuskan mentioned that she had heard of pop-up drive-in theater events. We looked into it and found that it was doable.

My next decision was the choice of movie, but that didn’t take long. Drive-in theaters in July and baseball were a big part of my life growing up in the cornfields of Iowa, so the movie had to be the classic Iowa-based film Field of Dreams. Plus, I’ve heard many comments about people missing baseball, the quintessential July sport.

July 7th turned out to be the prototypical July evening. As the sun set over the fields of St. Patrick’s County Park, cooler temperatures moved in and created the perfect evening for watching a movie set in the natural beauty of the Midwest. Since the film has touch points for all ages, it very much fit the family-friendly atmosphere.

The highlights, of course, are the two times in the movie where a character asks “Is this Heaven?” and the answer is “No, it’s Iowa.” I wore my authentic Field of Dreams t-shirt with those lines to the party.

You also awarded the annual NDR REF-ie awards at the WLJ party. Can you explain how those awards came to be?
Prior to coming to Notre Dame, I had observed that university organizations performed very much according to organizational culture. This is probably true of all organizations, but I felt it was particularly true of universities where so much of the work of a university is done autonomously and independently. I had also observed that a catch-phrase was useful in establishing culture. Therefore, because I wanted the culture of NDR to be responsive, effective, and friendly, we promoted that people in NDR should be REFs:

Responsive to emphasize that we would meet our commitments and responsibilities in a timely manner and that we would be accountable.

Effective to be problem solvers, generally to look beyond the symptoms to the root causes of the problems or challenges.

Friendly in building relationships with our colleagues by being approachable, understanding, patient, and cheerful.

The REF culture is intentionally consistent and complementary to the University values of Integrity, Accountability, Teamwork, Leadership in Excellence, and Leadership in Mission. I have been truly humbled by how this culture has been adopted by the staff and faculty of NDR.

What is a REF-ie?
The REF-ies recognize faculty and staff who have been identified by their colleagues to be exemplary in living NDR’s culture of being responsive, effective, and friendly.

After a few years of promoting the REF culture, we decided that it would be a good reminder of it if we recognized particularly good examples of the culture. I have to admit to being a bit conflicted about giving recognition to just a few individuals because I was observing so many great examples of the NDR faculty and staff being REF. But I decided that the celebration of the culture, as well as the potential to make many awards over the years, seemed to more than counterbalance my concerns. Thus, the REF-ie was born as an annual, Oscar-type award to three to four individuals who are nominated by their fellow NDR colleagues as being excellent examples of REF.

Each year we’ve awarded the REF-ies at the WLJ party as a way to recognize, appreciate, and celebrate the culture we are building at NDR. The award winners each year are truly deserving, but there are many others in the NDR that are deserving as well. I appreciate the winners who I know to be prototypes of the REF culture as well as all of the many other NDR staff and faculty who are REF every day at Notre Dame.

It’s clear that promoting a positive workplace culture is important for you and NDR. How has the REF culture transformed since those early days?
At one point, several years ago it occurred to me that REF emphasis was on customer service at the potential neglect of taking care of ourselves. It was not my intent, but if someone took the REF culture to an extreme, it could go beyond a healthy workplace culture. As a result, I added a tagline. I now say that in NDR we want to be Responsive, Effective, and Friendly… and a Great Place to Work.

We spent time looking for programming that will get us all on the same page about what constitutes a great place to work. About a year ago we started assembling materials drawn from the literature around “intrinsic motivation.” The premise of this research is that humans are intrinsically motivated to do a good job. In an ever-increasingly knowledge-based economy, especially if work at home is to be more common, it is important to unlock that motivation. The keys to unlocking intrinsic motivation are autonomy, mastery, and purpose: autonomy for an employee to have ownership of how they do their work, mastery of the background and constraints of their work, and purpose to understand the work supports the University and NDR mission.

Implementing our programs to unlock and establish intrinsic motivation is still a work in progress, but one that has been much accelerated by the restrictions and new work environments imposed by the pandemic. It seems like a really good approach for this very unprecedented and complicated time.

Originally published by Brandi Wampler at research.nd.edu on July 23, 2020.