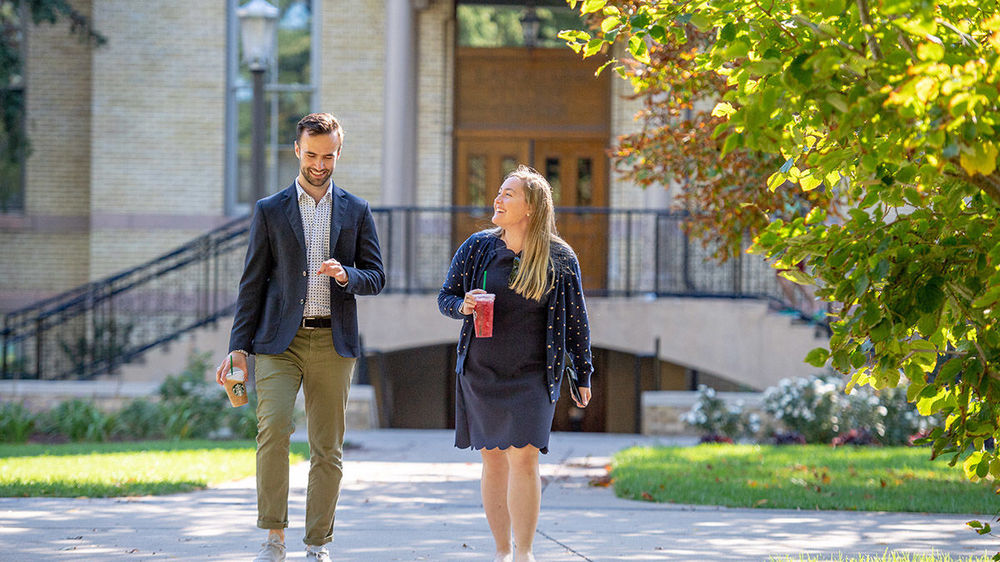 Nothing says friendship quite like a road trip, especially when the destination is a hospital for an eight-hour bone marrow donation procedure. Perhaps it is not the typical expression of

Zubizarreta in the hospital in Indianapolis

camaraderie, but for Notre Dame alumni and staff members Javi Zubizarreta ’11 and Jackie Thomas ’11, it was simply another opportunity to be there for each other.

Zubizarreta is the senior producer at Grotto Network, a digital platform for millennial Catholics launched by the University last fall. He became inspired to register as a potential donor on BeTheMatch.org after producing a video featuring Samantha Smith. Her late husband, Butler University basketball player Andrew Smith, was diagnosed with leukemia and received a bone marrow transplant thanks to Be The Match. Sadly, he lost his battle with the disease in 2016.

Registration, Zubizarreta learned, involves nothing more than signing up online, receiving a test kit in the mail and performing a simple swab of the cheek.

“I just thought, ‘Well shoot, this sounds like a pretty easy thing to do,’” he shares. Zubizarreta received the call saying he’d been matched only two short months after sending in the test. His immediate answer was, “Let’s do it.”

Likewise, Thomas didn’t hesitate when her friend asked her to accompany him to an Indianapolis hospital where the procedure would take place.

“Jackie jumped and said, ‘Yes, even if it means taking time off work — whatever. I’ll be there for you.’”

Zubizarreta shares that their friendship has become stronger over the years through the “sharing of our respective traumas.”

“It’s just sharing pivotal moments together,” agrees Thomas. “I think I really recognized Javi as someone that I was going to remain friends with throughout my life because he was so kind to me when I needed help.”

Their friendship began as many do for young people — in the classroom. Both were taking a Film, Television, and Theatre class and working for NDTV, plus they shared a mutual friend and their residence halls were next to each other. (He lived in Sorin and she was in Walsh.) But it took a lot more than close proximity for their friendship to develop into what they have today.

“You have different friend groups throughout your life for different reasons, and this one has just remained consistent and very honest and true,” Thomas says.

From stressful papers for theory classes to “soul-crushing” post-graduation jobs, Thomas and Zubizarreta have been go-to supporters for one another through it all, so perhaps it is no surprise that both have ended up working back at their alma mater.

“Javi came back to Notre Dame before I did, and I got to say, that was really guiding for me to find my way back here, too,” Thomas says.

“It’s a little bit of family when your family is miles and miles away,” shares Zubizarreta, who is originally from Boise, Idaho.

Being more like family than friends, it was most likely a no-brainer that Thomas would be the one to spoon-feed him while he lay immobile in a bed for eight hours.

His bone marrow was donated to a 48-year-old man with pre-leukemia myelodysplastic syndrome.

“When I needed water, she was there holding the straw. When it was lunchtime and we ordered chicken strips from the hospital menu,” he says, “Jackie cut them up into little pieces and fed me.”

“I now know his ratio of tater tot to ketchup!” Thomas jokes, but Zubizarreta emphasizes that “it takes a lot to give of yourself to someone like that, and that is something I
value so much in Jackie.”

Thomas is just as impressed with how her friend handled donation day. “Javi rose to the challenge with such a graceful and compassionate heart that the concept of this being in any way difficult really didn’t manifest. He was wholly committed and throughout the day was thinking about how much this gift is going to impact, and quite possibly save, a life. I think that made something that is really hard seem less scary and almost easy.”

As part of her job as manager of the Young Alumni Program, Thomas explores the influence Notre Dame alumni have on their communities. She says Zubizarreta is the perfect example of an alumnus who makes an impact.

“Seeing what Javi did that day was a perfect embodiment of what we try to do at Notre Dame,” she says in reference to the University’s mission to cultivate in its graduates a sense of human solidarity and concern for the common good.

The recipient of his donation is a 48-year-old man with pre-leukemia myelodysplastic syndrome, but that is all that was disclosed. “They keep the donation confidential for one year from the date of the donation,” he says.

He urges others to consider registering as a donor. “It is such a simple thing to do … I would encourage anyone and everyone to get tested and if you are the match, to follow through with it.”

To learn more about bone marrow donation or to sign up to receive a swab kit in the mail and join the registry, head to BeTheMatch.org. See the story that Zubizarreta produced on Samantha Smith at grottonetwork.com/make-an-impact/heal/healing-from-grief.