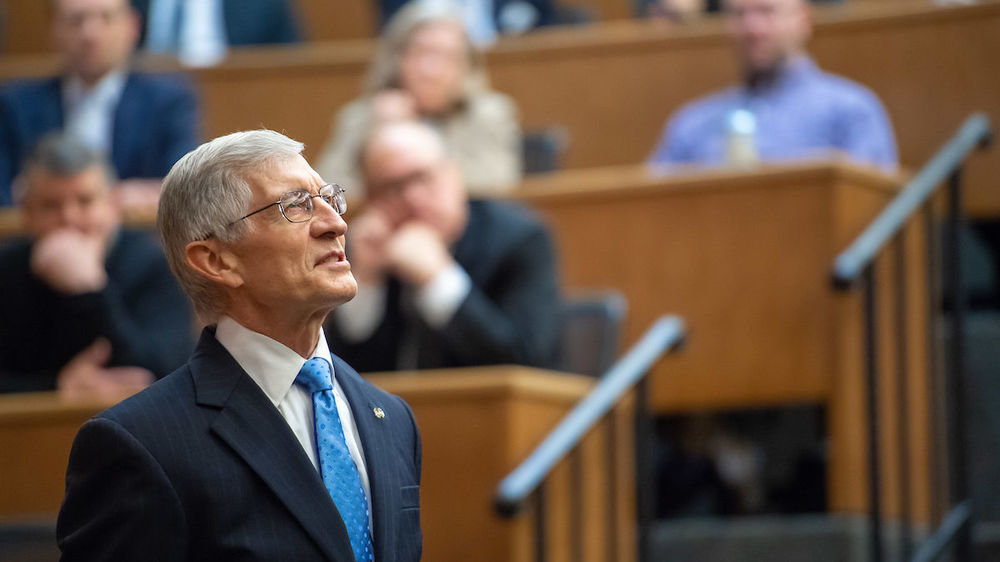 Thomas G. Burish hasn’t shared his plans beyond July 1, when he steps away from his duties as the Charles and Jill Fischer Provost at Notre Dame after 15 years on the job. That doesn’t mean some of those who know him best haven’t given it some thought.

“I see him doing something different and new but doing it intensely because someone like Tom has a lot of energy,” said Mark W. Roche, the Rev. Edmund P. Joyce, C.S.C., Professor of German Language and Literature and a professor of philosophy.

Roche became well acquainted with that energy when he served as the I. A. O’Shaughnessy Dean of the College of Arts and Letters. His term as dean overlapped with Burish’s time as provost for three years.

“Tom was a colleague who could help me think through puzzles because he has so much experience and such a sharp, analytical mind.”

Christine M. Maziar, vice president and senior associate provost for budget and planning, has worked beside Burish throughout his years as provost.

“Tom has worked tirelessly. He has a truly inspirational level of commitment to this University. He’s always calm, but he’s never relaxed,” Maziar noted.

“So, I really hope he has the opportunity to pull out a fishing pole, takes some time to stomp around in the woods or stomp around the golf course on occasion because he’s certainly earned every moment of enjoyment that is coming to him now.”

As Notre Dame’s chief academic officer, Burish has been responsible for the overall operation of the academic enterprise, including the faculty, colleges, schools, institutes, centers and libraries, as well as functions such as admissions, student advising and financial aid.

“One of the key ways that a provost affects the academic quality of an institution is to ensure we have very high standards in the promotion of faculty,” Maziar said. “What’s unusual at Notre Dame is the degree to which the provost is asked to also be a key figure in fundraising. Tom has spent countless hours with the development team, making the case to benefactors of the University to support the institution.”

Time well spent. Increased benefactor investment in the University during the past 15 years has positively impacted the academic quality and reputation of Notre Dame.

“When I think of Tom’s legacy,” Maziar said, “what comes to mind are four things: new investments in science and in engineering, in addition to the humanities, that had not been made before his tenure; the establishment of the Keough School of Global Affairs; the increased emphasis on internationalization of the campus and experiences of an international nature for our students and for our faculty; and a reinvigorated emphasis on the importance of research and scholarship for a Catholic university that expects to have something to say in the world.”

The University’s Catholic identity drew Burish to Notre Dame as an undergraduate (’72) and it’s what brought him back in 2005. He came to his post from Washington and Lee University, where he was president for three years. Before then, he served Vanderbilt University as its longest-serving provost from 1992 to 2002 after a distinguished career there as a cancer researcher, educator and administrator. He holds master’s and doctoral degrees in psychology and clinical psychology from the University of Kansas.

Burish was the right person for the job at the right time. University President Rev. John I. Jenkins, C.S.C., calls him a transformative provost for Notre Dame.

"It has been a great joy and privilege to return to my alma mater as provost and to be able to work with the trustees, faculty, staff, students, alums, donors and others on the ambitious agenda articulated by Fr. John to be a truly Catholic, truly pre-eminent research university,” Burish said. “In a career filled with countless blessings, being part of the Notre Dame administration and faculty, and working with Fr. John and John Affleck-Graves and many others, has been a special gift which has greatly enriched my life. I shall always be grateful.”

Burish and Affleck-Graves, who retired as executive vice president last July, were at Father Jenkins’ side for nearly his entire presidency to date. The three began their executive leadership roles at Notre Dame within months of each other, and each used his gifts and areas of expertise to bring to life Father Jenkins’ vision, articulated in his 2005 inaugural address:

“...to build a Notre Dame that is bigger and better than ever — a great Catholic university for the 21st century, one of the pre-eminent research institutions in the world, a center for learning whose intellectual and religious traditions converge to make it a healing, unifying, enlightening force for a world deeply in need.”

During Burish’s tenure as provost, annual external funding for research grew by more than $100 million, undergraduate financial aid grew from $58 million to more than $150 million annually, and annual investments in the Graduate School more than doubled.

Significant investments were made to strengthen the University’s humanities and social science programs, as well, with the addition of new faculty members and facilities to support a revitalized sacred music program and research in the areas of economics and psychology.

Starting in 2010, the University made significant investments in and placed increased emphasis on strengthening international programs and global engagement with the creation of Notre Dame International. Since then, Notre Dame has enhanced existing partnerships across the globe and developed many new ones, creating Global Gateways in Beijing, Dublin, Jerusalem, London and Rome. In 2014, the Keough School of Global Affairs was established, the first new college or school at Notre Dame in nearly 100 years.

More recently, significant multidisciplinary efforts have begun to strengthen Notre Dame’s course offerings at the intersection of data science, analytics, technology and ethics, with the creation of several new programs, centers, and institutes.

A key aspect of Notre Dame’s growing academic stature and research prominence has been its ability to add a new generation of world-class researchers, teachers and scholars to its already outstanding faculty.

Burish credits the University’s many successes in recent years first and foremost to the faculty and to a shared commitment of everyone involved in the academic enterprise, from the benefactors who provide the funding for endowed faculty positions to the deans and department chairs who continue to recruit many of the very best faculty members anywhere.

Whether it’s his psychology scholarship in practice or simply his nature, Burish’s warmth contributes to his successes and seems to bring out the best in people.

“He’ll write you a thank you note if you do something unusual,” Roche said. “It’s almost not believable how generous he is, but you want to believe that you did in fact do something good, so you are willing to suspend disbelief and appreciate the praise.

“I’m sure he offers such generous comments out of genuine goodness, but he’s a psychologist. There’s an ancient saying that with praise comes also greater motivation, so he’s also getting people to want to contribute further to the cause.”

That amiability extends to most anyone Burish meets.

Even with his full schedule, which would stretch well into the evening with events and dinners, he did not lose touch with the ordinary moments of campus life. Burish frequented North Dining Hall, sitting and chatting with students over lunch. Walking the sidewalks to and from meetings, he’d start up conversations with people.

“Tom appreciates these encounters as opportunities to hear what is on the minds of faculty, staff and students,” noted Laura A. Carlson, vice president, associate provost and dean of the Graduate School and professor of psychology.

“And the conversations did not end when the walks ended,” Carlson added. “He would often come back and share these perspectives and bring them to bear on whatever issues were being discussed. ‘I was talking to a faculty member today …’ is a preamble that all of the deans and associate provosts are familiar with. And what follows are then more robust conversations because of those insights.”

Due to the coronavirus pandemic, Burish’s last semester as provost was one of his most significant as he guided the academy through rapid changes in support of the many unprecedented decisions Father Jenkins was called on to make, decisions that included:

Jim W. Morrison, associate provost for strategic initiatives, noted, “There is no better time to witness the character of a leader than during a crisis. Tom’s leadership as we faced non-stop challenges during the past four months — a time when we should have been celebrating his many achievements as Notre Dame provost — has only reinforced my impression of how special a person he is.

“Even as we worked from emergency to emergency, he continued to make tough decisions, provide well-timed advice, teach others around him and ensure a smooth transition for the incoming provost. His work ethic is unmatched, and his humility and concern for others and for our University unparalleled. Working for and with him has been the opportunity of a lifetime.”

Burish’s term ends July 1, when he will be succeeded by Marie Lynn Miranda.