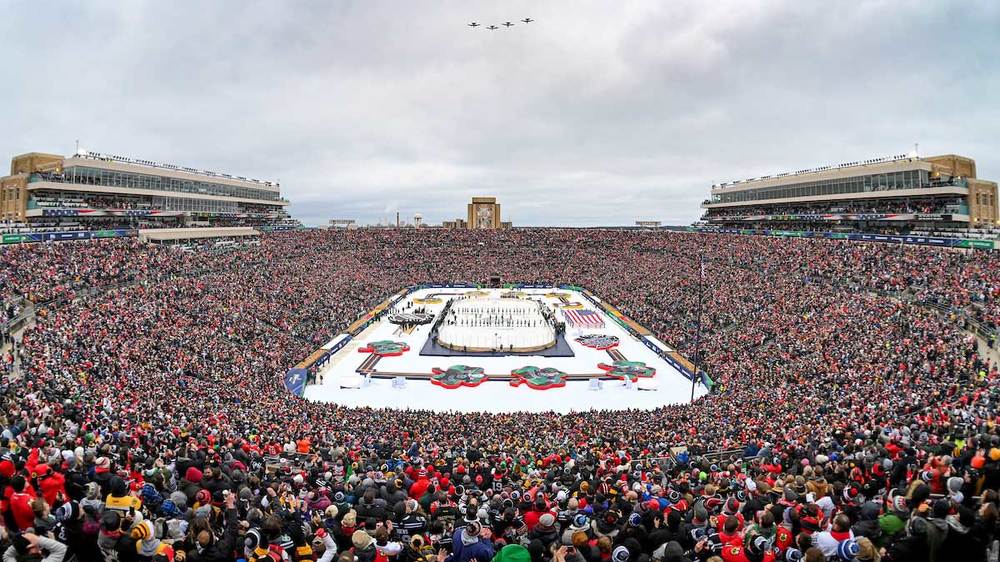 Special events including the Garth Brooks concert and NHL Winter Classic have made for a football-like atmosphere in and around Notre Dame Stadium in recent months, translating into increased business for local hotels — and increased economic activity in the community as a whole.

“The Garth Brooks concert and NHL Winter Classic are perfect examples of how Notre Dame’s commitment to new stadium events will significantly impact visitation and related spending to the area,” said Rob DeCleene, executive director of Visit South Bend Mishawaka. “The hotel numbers for both events speak volumes about the ability to drive new tourism spending to St. Joseph County.”

Brooks performed to a sold-out crowd at the stadium on Oct. 20. It was the first-ever concert in the historic venue. Another sellout crowd watched the NHL Winter Classic there on Jan. 1, in a nationally televised game featuring the Chicago Blackhawks and Boston Bruins.

Hotels and other local businesses.

Revenue per available room, a common measure of performance in the hospitality industry, was up both days as well — nearly 700 percent on Dec. 31 and more than 400 percent on Jan. 1.

Nearly all of the hotel rooms in the county were occupied the night of the concert, according to Visit South Bend Mishawaka, with average daily room rates and revenue per available room up considerably that evening as well.

“It was almost like a football weekend” for both events, said David Waymire, general manager of the DoubleTree by Hilton in downtown South Bend. “They were very good business for us.”

This despite a 10 percent increase in the overall number of hotel rooms in the county last year compared with the year before, highlighted by a new 164-room Embassy Suites at Eddy Street Commons and two new hotels — a 140-room Courtyard by Marriott and a 187-room Aloft — in downtown South Bend.

In addition to hotels, visitors for the concert and Winter Classic, as well as a second hockey game between the University of Notre Dame and the University of Michigan on Jan. 5, spent on food, lodging, transportation and retail in South Bend and the surrounding community as well.

“Anything big like that at Notre Dame is going to affect the entire city, and that’s great for us,” Waymire said of the concert and hockey game.

The University recently completed a massive renovation of Notre Dame Stadium, transforming the 89-year-old facility into a year-round hub for student and academic life and a world-class venue for large-scale concerts and other special events.

Moving forward, the University plans to host two to three such events at the stadium each year.

“The impact of the stadium improvements is already showing dramatic results, and it only bodes well for the opportunity for future events,” DeCleene said. “It also couldn’t come at a better time following our recent increase in hotel inventory in St. Joe County.”

Mike Seamon, vice president for campus safety and event management at Notre Dame, said, “We are excited to host large-scale stadium events, as they provide a unique opportunity to draw unprecedented interest and attention to the University and the surrounding area. One of the attractive elements of utilizing the stadium for events like the Garth Brooks concert and the NHL Winter Classic is the ability to introduce thousands of people who may have not been familiar with Notre Dame or the region to the area. In addition to the positive economic impact to the region, we hope everyone has some fun along the way as well. We are excited about the future.”

Originally published by Erin Blasko at news.nd.edu on January 22, 2019.