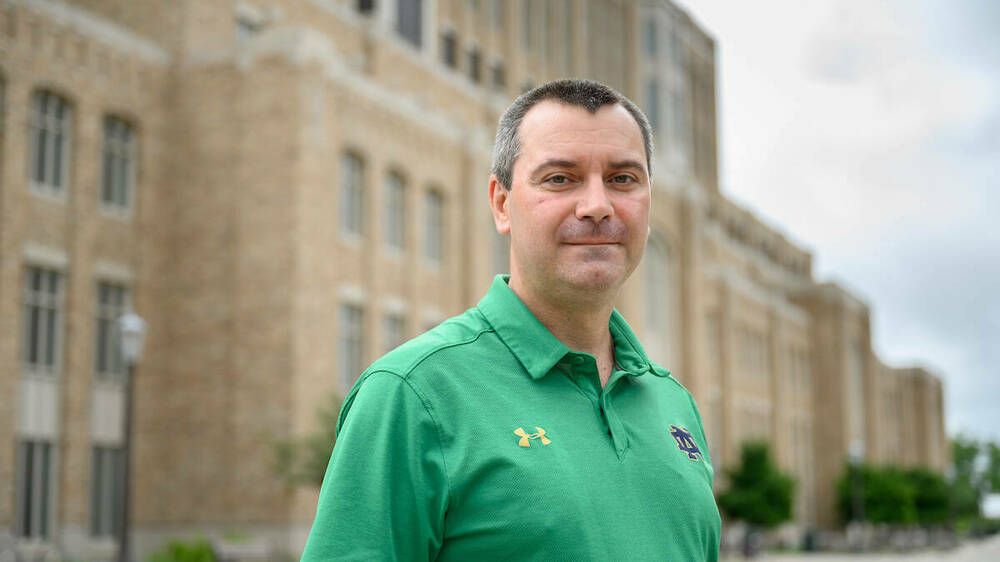 The normally bustling Notre Dame campus became like a ghost town in March 2020 when the coronavirus pandemic was declared. Students, on spring break, were told to remain home. Classes went online. Faculty taught remotely. Much of the staff worked from home. The eerie quiet hung on through the summer.

Some staff members with jobs closely tied to events were instructed to consult their “list of things to do if I only had the time” and propose projects.

As the loading dock administrator at Duncan Student Center — which stands on the west side of Notre Dame Stadium — it didn’t take Nick Ratkay long to come up with a project. Duncan was just two years old, and Ratkay, who appreciates order, thought that the labyrinth of corridors that snake from the underground loading dock to the stadium and student center could use his attention.

Ratkay was familiar with an organization system known as 5S, and he explained it to his boss Brian Fremeau, senior director of facilities and operations. Ratkay believed 5S could be a valuable addition to the overall operations of the stadium. “Brian’s response was, ‘If you think it needs to be done, go ahead and do it,’” Ratkay recalled.

The 5S system is used in manufacturing to optimize productivity and reduce waste. The five S’s originate from five Japanese words that start with the letter S, often translated into English as sort, set in order, shine, standardize and sustain. Ratkay was familiar with 5S thanks to working a summer job in a tool and die shop and because his dad worked in manufacturing.

“You can take that program and apply it pretty much anywhere you want,” Ratkay said. The main objective is safety, a large portion of which depends on keeping a pathway clear and identifying where items should be stored based on the importance of the items to the operation.

He saw a need

Ratkay began working in Duncan in the fall of 2017. The student center was not finished yet, but the back-of-house operations and the new stadium event suites above were fully operational in time for the football season.

Behind the scenes, Ratkay said, there was no rhyme or reason as to where things were stored or left. It was common for deliveries of cola to come through the dock and be left in a hallway and for an empty food cart to be parked in front of an elevator. After the building officially opened in January 2018, Ratkay said, there wasn’t time to organize the space — it seemed there was always another event on the horizon that took staff’s attention.

When the pandemic put a pause on events, Ratkay saw the perfect opportunity. “I wanted to take advantage of the freedom and the space,” he said. “That was when I was able to come down into an area, like near the loading dock, and I could clear it out and get all the cleaning supplies, scrub the floor really well, and prepare to color code the floor with tape.”

Knowing he’d spend the next several months on his knees applying large strips of primary-colored tape to the cement floors, Ratkay retrieved his old skateboarding knee pads from his parents’ house in Niles, Michigan, and purchased all the materials he’d need. Then he scoped out the building’s floor plans to map out the system.

From March 2020 through that summer, Ratkay seemed to have the 400,000-square-foot Duncan Student Center to himself. While listening to the Rolling Stones at full volume on a Bluetooth speaker, he got to work.

Here’s how the color coding works: Yellow tape represents spaces to keep clear for a pathway; red and white checkered indicates a space reserved for something fire-related, such as a fire extinguisher; yellow and black represent a hazard; green means temporary storage; white is permanent storage; and so on. The system keeps walkways clear of obstructions and helps staff from different departments locate their stored items.

Besides using colored tape, Ratkay found other ways to make the space neater and help direct employees. For instance, large items such as banquet chairs and dining carts are labeled and lined into distinct, alphabetical rows. As structured as this sounds, Ratkay’s system allows for flexibility. The tape is easy to pull up and the signs are re-printable.

Ratkay replicated the system at Corbett Family Hall, which flanks the east side of the stadium.

“Because of the uniqueness of the architecture, what worked at Duncan didn’t necessarily translate over to Corbett. In Corbett, the spaces are a bit smaller. So you couldn’t just take the blueprint from Duncan and repeat the same process over in Corbett. There were certainly times I remember where I really just felt like, ‘Oh my gosh, I’ve got so much more to do.’ And you just have to kind of work through it,” he said. It took Ratkay from March to October 2020 to complete the project.

Ratkay hopes to apply the 5S program to other parts of campus — specifically, inside the stadium itself. Expanding the project would greatly benefit the University, Ratkay said, because the system “cuts labor costs and makes people more productive and efficient.”

His work got him noticed by the Office of Risk Management and Safety, where he now works as a safety specialist.

Remarkably enough, Ratkay was originally drawn to work at the University out of his interest in theology. He holds a Master of Arts in theology, with a concentration in sacred scripture and Church history, from Saint John’s University in Minnesota and is pursuing a predoctoral master’s in theology through Saint John’s.

When asked what the next step in his career might be, he said, “Honestly, I don’t want to leave the University at all. I’m happy being here.”

Contributing to that happiness is a side job with the McGrath Institute for Church Life, where he is able to apply his theology knowledge. In the evenings, he facilitates online theological courses for the institute’s STEP program. He has also taken several courses at Notre Dame since arriving, including graduate-level theology classes and two summer German courses. In the future, he hopes to use the University’s educational benefits to pursue another master’s degree here.