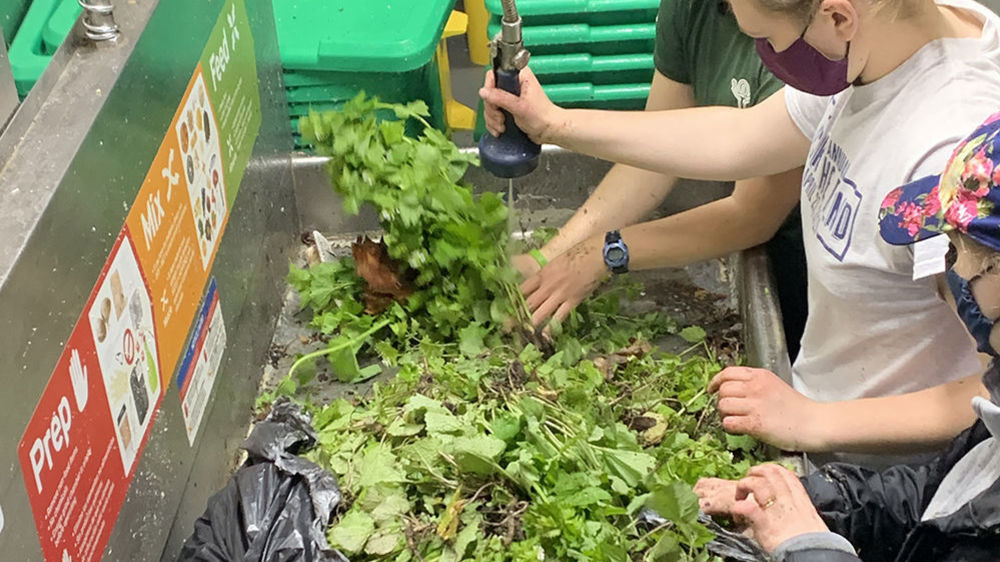 Sustainability interns Rachel Hughes and Cassondra Kronenberg, along with Caitlin Jacobs from the Office of Sustainability, mix garlic mustard plant matter with water and grind it into a slurry. The slurry will eventually be converted into methane and used as natural gas.

On Saturday, April 24, as part of Notre Dame’s Earth Week celebrations, a team of 11 people braved a chilly morning rain to combat one of the campus's invasive foes: garlic mustard. Staff and interns from the Office of Sustainability joined with student, faculty and staff volunteers in Notre Dame’s first Garlic Mustard Pull, which took place along St. Mary’s Road and the St. Joseph lakeshore.

Garlic mustard, an invasive plant species native to Europe, poses a significant threat to wildflowers and other native vegetation. Not only does it outcompete native species for space and light, but it also releases chemicals into the soil that actively inhibit the growth of other plants. Pulling out garlic mustard’s flowering stalks opens up more space and nutrients for native wildflowers and other plants, such as trillium, Solomon’s seal and Jack-in-the-Pulpit, to grow and spread.

In all, volunteers spent two hours collecting approximately 500 pounds of plants. Rather than dispose of the vegetation into the landfill, the 5,000 garlic mustard plants pulled were taken to the Grind2Energy system for processing. The process for disposing of the plants is the same as for nonconsumable food waste, where it is mixed with water and ground on site into a slurry that is then transported to a local dairy, where it is converted for use as clean renewable energy. The system was installed at the Center for Culinary Excellence in 2019.

The fight against garlic mustard on campus is far from over. As Saturday’s mustard pullers will tell you, once you start seeing the long stalks with small white flowers, it is impossible not to see them everywhere. For now, though, native plants have a little more room to grow between St. Joseph’s Lake and St. Mary’s Road, and a conversation has started about native vs. invasive plant species on campus. Maybe next year a team will tackle the bush lurking under many lakeshore trees — invasive honeysuckle.