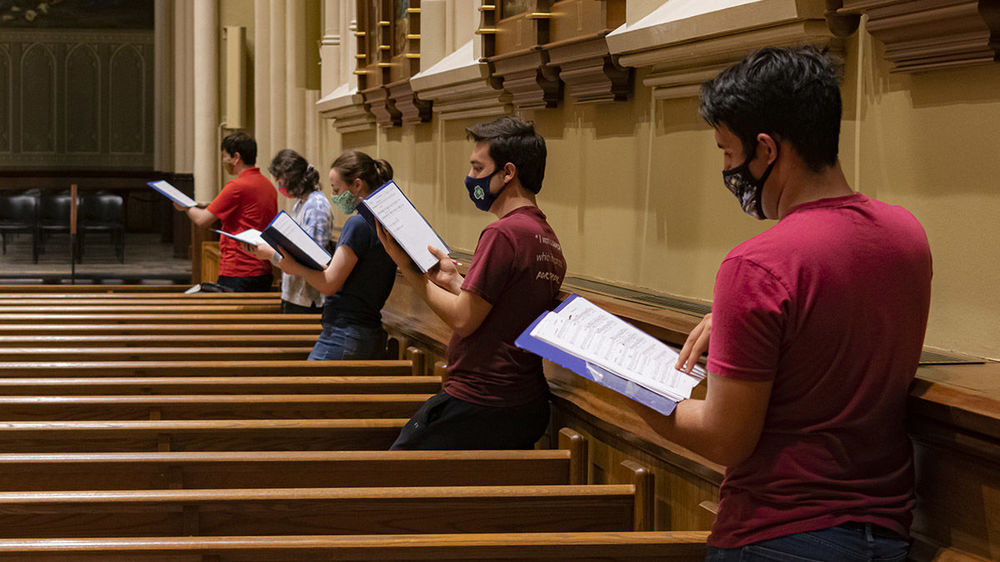 The pandemic has derailed too many Notre Dame events to count, including the possibility of a reunion to mark the 40th anniversary of the Folk Choir, part of Campus Ministry.

Rather than shrugging it off as another COVID-19 related disappointment, the choir came up with an alternative tribute: They are producing an album of 10 hymns. It’s a remarkable project considering 60 students make up the choir and they could not perform together.

“We were able to make these recordings over the course of last semester and some of this semester in a COVID-safe way,” Folk Choir director J.J. Wright said. He explained that singers and instrumentalists contributed their parts individually in a recording booth, which was cleaned between sessions.

The album will drop on Friday, May 28, and it will be available on all streaming platforms.

“We’re in the final stage of post-production,” he said, adding the choir has been releasing singles for a couple months. The next one comes out this weekend on Holy Saturday.

The project is the ultimate example of resilience demonstrated by the Folk Choir since COVID-19 came on the scene in March 2020.

“They’ve taken (the pandemic) very much in stride and are always looking for solutions for how to still do this thing that they really care about in an environment where it’s exceedingly difficult,” Wright said.

Last spring, Wright asked students to consider what the new normal might look like when they (hopefully) returned to campus in the fall. Because of the nature of how COVID spreads, singing side by side was proven unsafe.

“We had to re-imagine how we were going to do our ministry, which is to sing at the 11:45 a.m. Sunday Mass in the Basilica,” Wright said.

“We threw around as many ideas as we could think of and this is where we landed: Every week during the fall, we would record and digitally release one of the songs we would have sung at Mass and that would be the way that we do our ministry.”

Every song has its own video — some are very simple, with lyrics at the bottom, and some include b-roll of campus that students shot and edited. Every week during the fall, the choir shared a video in its e-newsletter and on its Facebook, Instagram and YouTube accounts. The response was fantastic. This video, “The Summons,” released Oct. 3, got nearly 19,000 views.

“I asked students, what would make you want to share the content with friends? That’s when the conversation got interesting. The project got even better when they thought about it that way,” Wright said.

Additional student videos include reflections by choir members about the songs, sometimes in light of the pandemic. Wright is delighted with how the students stepped up to find ways to minister to their peers during these times.

“Students understand each other better than I ever could. They’re 18 to 21 years old and want to look out for each other’s well-being. If we can give them the tools to figure out how to care for and minister to each other, then all the better.”

The choir produced 15 songs and selected 10 of them for the album. Students took on different roles to make it all happen.

“Each week, four or five students would work on the audio, which is its own project (mixing the voices), and few more worked on the video,” Wright said. Others worked on storylines to help illuminate the song.

Now, choir members are using their production skills for another project, this one with Folk Choir alumni. The project melds the student version of “Day is Done” and one that alumni produced around the same time.

“The craze last year was these virtual choir videos where everyone’s heads are on the screen. We’re making a giant one with the current students and the alumni. We took the arrangement of the former (and founding) Folk Choir director, Steve Warner, and the arrangement the current choir made last year and we mashed them into one video, and then we sent it out to all the Folk Choir alumni and asked them to record a video of them singing the song. Our goal is to have 300 squares on the screen. I think we can do it,” Wright said.

Meanwhile, opportunities are opening up for the Folk Choir to safely sing together. Earlier this month, the Folk Choir was able to rehearse in the Basilica of the Sacred Heart for the first time in a year. In order to be adequately distanced from each other, the choir was divided into two groups of 30 for two separate rehearsals.

A limited number of choir members will sing and play instruments at the Holy Thursday Mass at 5 p.m. and at the Easter Sunday noon Mass.

Plus, the Folk Choir will serve as the chorus in the Department of Film, Television and Theatre’s production of “Jesus Christ Superstar,” to be held in Notre Dame Stadium at 8 p.m. Friday, April 9. Tickets will be free and are available only to students, faculty and staff with an NDID.

“We look forward to what’s ahead,” said Wright. “But I also want to thank the students for making the most out of this past year. Their will to find creative solutions in the face of adversity speaks to the character and strength of faith of our students here at Notre Dame.”