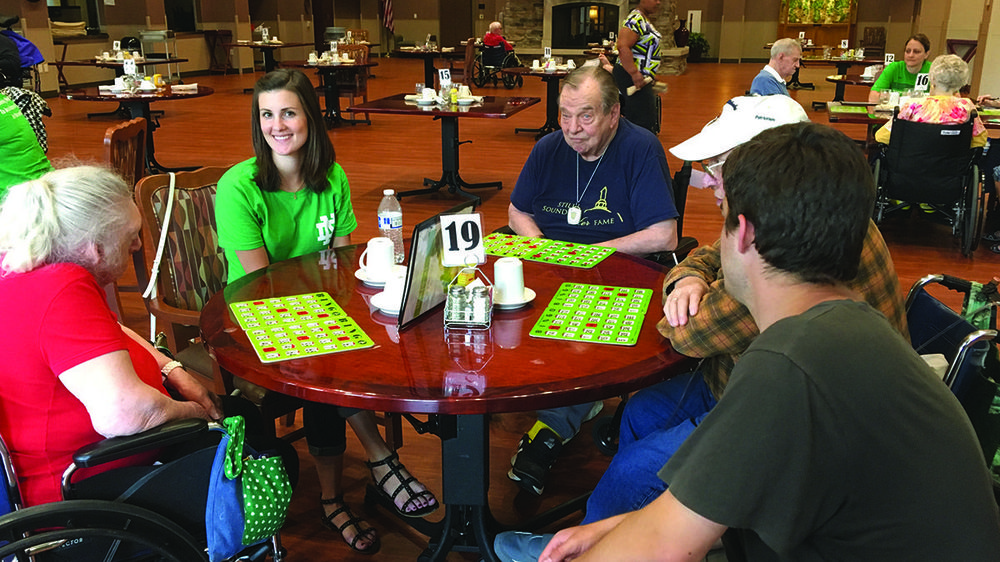 On Tuesday, Aug. 14, the week before fall semester classes began, it was nearly impossible to find a Finance Division employee at his or her desk.

The 90 staff members took part in the second annual Finance Division Community Service Day. In groups of 10-20, they fanned out across St. Joseph County to serve five agencies at six locations.

At two Goodwill stores, they pulled merchandise from the floor to be transported to other stores. Another group sorted through food donations at the Food Bank of Northern Indiana. At the Healthwin Specialized Care Facility, finance staff led a game of bingo, while co-workers served at the Center for the Homeless, organizing donated clothes for a guest shopping event. Another group dispatched to Potawatomi Zoo pulled weeds and watered plants. It was a busy four hours.

“The afternoon was an opportunity to spend time helping others and to recharge by doing something totally different than our normal jobs,” says Carol Grontkowski, a senior technical analyst in Accounting Operations.

It’s common at Notre Dame for offices and departments to participate in service opportunities. Community engagement, in the form of volunteer service and service learning, is a reflection of the University’s Catholic character and institutional mission.

“Serving others, that’s what Jesus did,” comments Mark Zeese, a business processes program manager in Accounting Operations. “What’s key is that it can be in the smallest ways. It doesn’t always have to be big home runs, right? But in small ways, look how you can make someone else’s life better.”

Zeese and Grontkowski serve on the division’s Community Service Committee, which has organized volunteer opportunities and giving campaigns for the division for 15 years. The afternoon of service became part of the division’s summer retreat day about two years ago after Shannon Cullinan was appointed vice president for finance.

During the summer, the committee of seven divvies up a list of nonprofits to contact to see which have work that could be accomplished in an afternoon.

On Aug. 14, six teams left campus dressed in matching kelly green T-shirts that had “Finance Division Volunteer” printed on the front, and on the back: “Empowering Notre Dame to be a force of good in the world.”

Zeese served at a Goodwill store.

“We were out on the floor with our heads down working, and we hear one of the assistant managers over the loudspeaker say, ‘May I have your attention, please. We have some visitors here today in green shirts. They’re a group from Notre Dame who are helping us today and we really appreciate their assistance.’ And there was a light applause among the shoppers,” Zeese recalls with a smile.

Later, a manager told Zeese that what his team accomplished in a couple hours would have taken them several days to complete, given other responsibilities.

Grontkowski volunteered at Healthwin. She enjoyed every minute of it.

“She was just a dear and so lively. At times she would kind of shout out to the bingo caller, ‘You have to speak louder! Can’t hear you. Talk louder!’”

The day was fun and meaningful.

“I became more aware about the nonprofit I was assigned to, and I think that was the case for everyone that day,” Zeese notes.

That awareness could have a ripple effect. Someone who had a positive volunteer experience at an agency may choose to volunteer there on his or her own or do so as a family outing.

Finance has service plans for the spring semester, too. For a second year, the division will offer opportunities for 10 different employees each month to serve at a nonprofit for an afternoon.