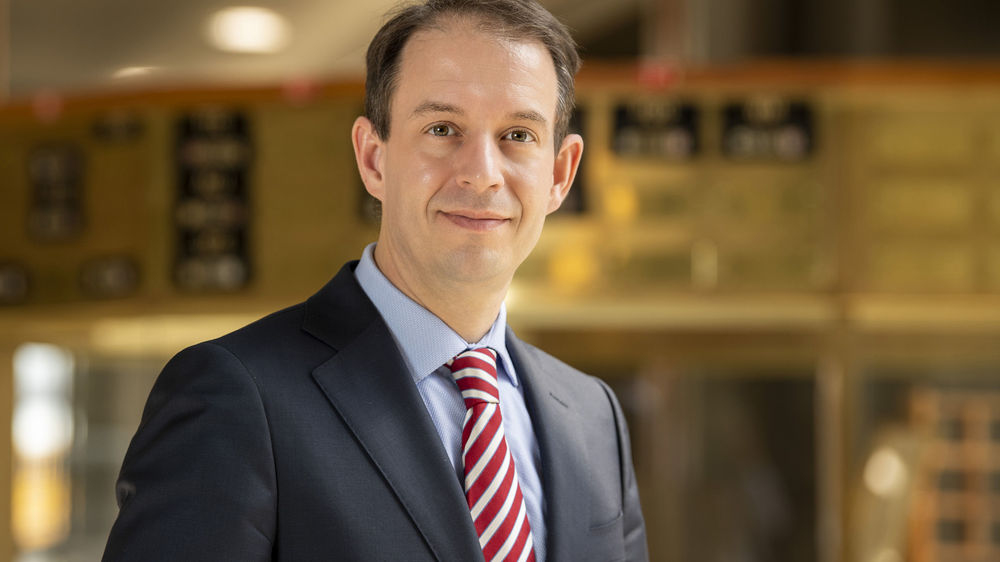 Newly appointed Mendoza dean Martijn Cremers dedicates himself to advancing the integration of business principles and Catholic values. There’s an inside joke floating through the Mendoza College of Business that Dean Martin walks its halls.

“It’s true,” says Mendoza’s newly appointed Dean Martijn Cremers with a laugh to the reference of the Hollywood legend. “I am Dean Martin. I’m embarrassed to say that I had to Google who Dean Martin was and now I know. It is pretty funny.”

Cremers began his tenure as the Martin J. Gillen Dean of the Mendoza College of Business July 1. He joined Mendoza in 2012, was named the Bernard J. Hank Professor of Finance in 2017 and interim dean of the college since last July, and was selected as full-term dean among a number of qualified candidates who were considered during a six-month national search.

Originally from the Netherlands, Cremers began his academic journey in the United States when he attended the Stern School of Business at New York University.

“My older brother was the trailblazer in my family,” Cremers says. “He came to the States for school and convinced me that I needed to do the same. It’s when I was at Stern that my faith became much more important to me.”

While at Stern, Cremers also realized how much he enjoyed both research and finance. Upon graduating, he was offered a position at Yale University’s School of Management where he served for 10 years.

“The job offer from Yale was unexpected,” remembers Cremers. “But it solidified our future here in the States.”

As Cremers’ faith continued to grow, his wife Liesbeth—who also received her graduate degree in the U.S.; they met in Amsterdam as undergraduates—suggested he find a position that integrated his Catholic faith and his profession.

“I was looking for a university that defined excellence comprehensively—where equal focus was placed on research, teaching, and the personal formation of students,” Cremers explains. “But there was a big caveat on this. I didn’t know what this would look like in practice. Yet I was committed to exploring it.”

As a faculty member at Mendoza, Cremers has dedicated himself to integrating Catholic social teachings and business. “I wanted to lead a class where we would consider business in light of Catholic social teaching, or business for the common good,” he says. “Where else but Notre Dame could I teach a class like this? Where else would I have a community of scholars who were willing to be a part of this discussion and students who would be interested?”

As interim dean, Cremers says he was “somewhat disruptive” to how the current curriculum was presented. “Historically, the undergraduate business program had been three years,” he says. “But now, students can take classes at the business school as first-years, making it a four-year curriculum. What we’ve learned is that this added year gives students time for better discernment of their major—better sense of what they want to do. It allows more time for them to prepare for internships and flexibility to take electives within their majors.”

Cremers proposes a three-tiered direction for the future of Mendoza’s undergraduate business curriculum that encompasses the traditional business disciplines, the new emerging discipline of analytics (big data and artificial intelligence), and the humanities. “As a university, we’re looking at how Catholicism can be taught across the disciplines, where much of the Catholic social thought applied to business is ‘catholic’ with a small ‘c’ or based on universal human values such as the intrinsic dignity of every person, solidarity, and subsidiarity,” Cremers says.

Cremers has established deep roots in the South Bend community, living along Notre Dame Avenue. “There is always a football or basketball game going on in the yard,” Cremers says, not surprisingly. With five sons and a daughter, there is a ball being tossed at all times. Having played field hockey and tennis as a youngster himself in the Netherlands, Cremers today enjoys swimming and the occasional kayak trip down the St. Joe River. “South Bend has been a wonderful city to raise our family.”

Admittedly, with furthering the mission of the Mendoza College of Business top of mind these days, there’s little time for much else. But you won’t hear Cremers complain. “I’m grateful for the trust placed in me to advance Mendoza’s distinctive mission as a Catholic business school, where we seek to educate business leaders who want to contribute to human flourishing, cooperate in solidarity, and compete with excellence.”