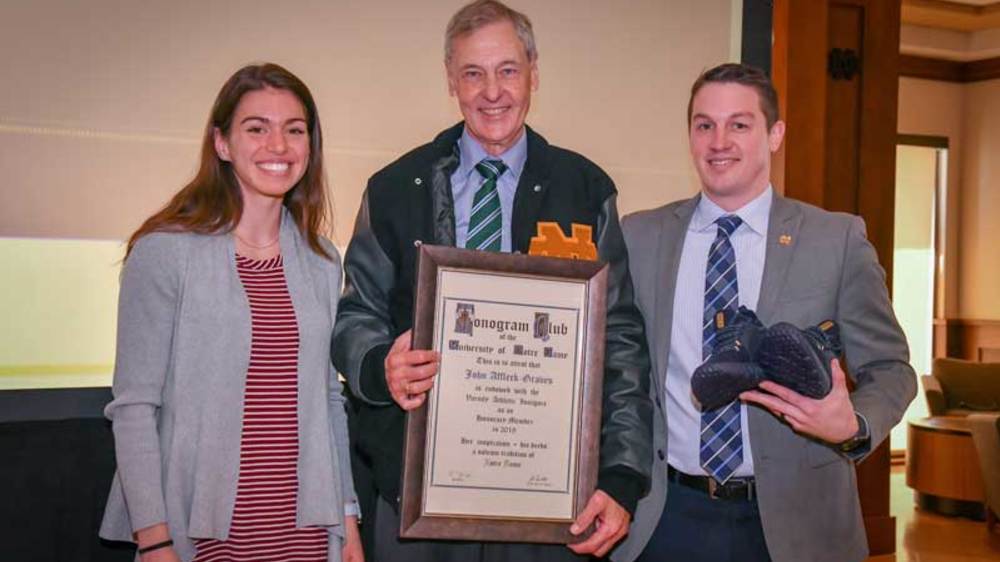 The Notre Dame Monogram Club recently presented  John Affleck-Graves with an honorary Monogram for his years of service as Notre Dame executive vice president and his support of Fighting Irish Athletics.

The Monogram Club awards honorary Monograms to individuals who have demonstrated a commitment to the betterment of Notre Dame Athletics and the development of Fighting Irish student-athletes and graduates. The presentation took place inside Club Naimoli at Purcell Pavilion following Affleck-Graves’ town hall address to the Athletics department. It was the final such meeting as Affleck-Graves will retire from the University in June.

Affleck-Graves was elected executive vice president April 30, 2004, by the Board of Trustees. He holds the Notre Dame Chair in Finance and previously served for three years as vice president and associate provost. His responsibilities include administration of an operating budget of $1.6 billion and an endowment of more than $13 billion. Additionally, he oversees human resource activities for a work force of more than 5,000 employees – the largest in St. Joseph County – and directs the University’s construction program, which has renovated and built numerous athletic venues over the past 15 years. Affleck-Graves has also served on the Notre Dame faculty since 1986.

A native of South Africa who is a U.S. citizen, Affleck-Graves earned bachelor’s, master’s and doctoral degrees from the University of Cape Town. He has received eight outstanding teaching awards at Notre Dame – three in the MBA Program, four in the Executive MBA Program and one for undergraduate teaching – and two others at the University of Cape Town, where he taught from 1975-86.

“We can’t begin to describe the tremendous impact you have had on the University and Athletics,” said University Vice President and James E. Rohr Director of Athletics Jack Swarbrick (‘76, honorary) to Affleck-Graves at the ceremony. “Your ability to help push us all forward to excellence and all the very special ways you have positively contributed to the student and student-athlete experience are unparalleled. All of us work here on behalf of our students to positively impact their lives.”

Following Swarbrick’s comments, he introduced Jessica Harris (‘18), a fifth-year senior on the cross country/track & field team. Harris is a five-time All-American, two-time track & field team captain and a recipient of Notre Dame’s Byron V. Kanaley Award. She addressed Affleck-Graves and his impact on student-athletes like herself.

“I’ve had the opportunity to compete while wearing the Monogram on over 57 occasions,” said Harris. “Every time I put on the Monogram it becomes more special, especially as I’m nearing the end of my career here, like you. It has grown to have more meaning. When I step to the line, I’m not only representing myself, I’m representing my family here, my community here and individuals like you. Reflecting on what my career will look like after college, having people like you behind me has made a world of difference. I recognize my experience here has been completely shaped by your leadership. Thank you for your support of the athletic community.”

Harris presented Affleck-Graves, an avid runner who has completed over 100 marathons, with a new pair of running shoes before surprising him with a Monogram jacket.

“I am deeply honored to receive this honorary Monogram,” said Affleck-Graves. “Notre Dame student-athletes represent our talented student body so well, as balance their challenging academic responsibilities with their athletic commitments.”

Originally published by Monogram Club at evp.nd.edu on April 17, 2019.