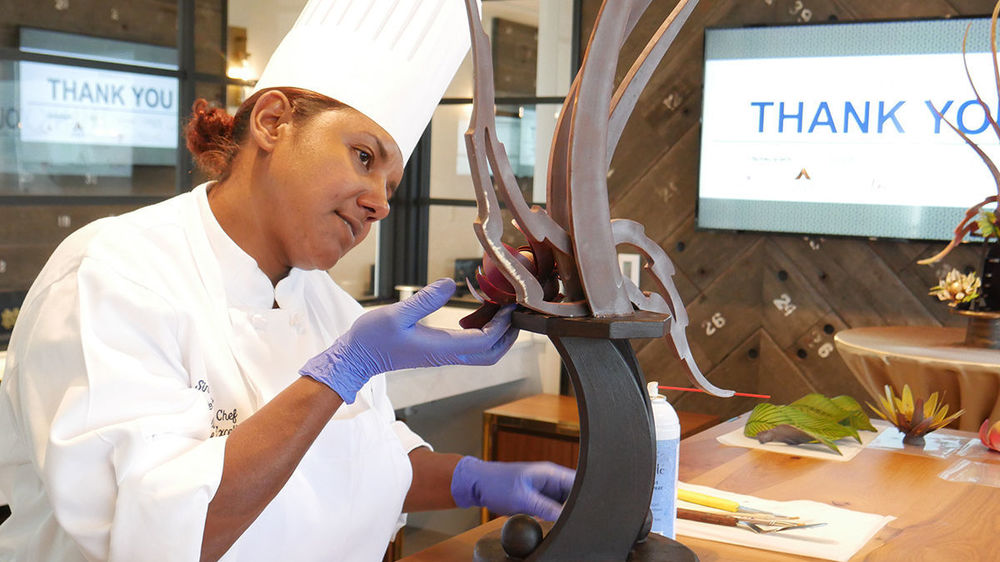 Pictured above is Executive Pastry Chef Sinai Vespie putting the final touches on a chocolate sculpture at a special event held at the University. Scroll down to see a photo gallery of her work and that of her team.(Photos provided by Campus Dining)

It wasn’t just another day in the office for Executive Pastry Chef Sinai Vespie to create from scratch a cake based on nightmares — but she did so fearlessly, and on national television, no less. Vespie, who works in Campus Dining at Notre Dame, faced off against nine chefs during the first episode of Food Network’s Halloween Baking competition, Haunted Housewarming, which airs for the first time this week. (Check Food Network’s schedule to see when it airs next.) NDWorks Weekly wanted to get to know Vespie and her baking inspiration that led to the national television competition and how much fun she had competing. Here’s a conversation with Sinai Vespie ...

How long have you worked at the University?

I’ve been at Notre Dame for three years and four months. Prior to that, I was the pastry chef at the Tampa Marriott Waterside.

Where were you trained as a pastry chef?

Why pastries? Did you love baking as a child?

I have very fond memories of my grandmother making cakes for all of our birthdays before going blind. I loved sitting and watching her and eating up her sugar flowers and silver sugar pearls. My Uncle Carlos was a baker as well. Growing up, on Sundays we would visit the bakery where he worked to have breakfast and I would stand by the decorator's window and watch Uncle Carlos decorate cakes and desserts.

Are you an artist in other mediums as well?

Yes! I love to crochet and make jewelry when I have time. It’s relaxing to me. I’ve also recently developed a passion for gardening and collecting succulents.

How did you get the idea to compete in a baking competition on the Food Network?

I’ve been wanting to compete in one of their shows for quite some time! The producers reached out to me on Facebook and asked if I would be interested in competing. I've interviewed for other shows but either it wasn't a good fit or I was not able to commit. This time the stars aligned just right.

I had three or four phone interviews, sent pictures of my work and a few Skype sessions in which I had to make a themed cake and plated dessert to show producers.

Can you describe what the competition and overall experience was like?

The competition was filmed in an outdoor tent in California, and the experience was like the rush of being on a huge roller coaster. I had such a great time competing and pushing myself to be better and to make smart decisions. I've competed before but this was by far the hardest but favorite experience. It was invaluable to have the opportunity to bake with some of the most amazing and creative bakers around. It's also great to walk away with nine new brothers and sisters in the pastry industry.

The show is Halloween themed. Does that happen to be a holiday you enjoy?

I do enjoy Halloween! It's the only day of the year in which it's socially acceptable to dress up and pretend to be anything you want for the day. My birthday is November 1, so over the years I've had a few costume parties to celebrate my birthday.

Some of my favorite memories as a mom of four boys (ages 11 to 22) are of my husband Jason and I taking them to the patch to pick our pumpkins. Our household is so competitive as the boys have gotten older, the pumpkin extravaganza has turned into a carving contest in recent years.

Could you describe your work and that of your team?

I’m the executive pastry chef of the bakery that provides the Notre Dame, Holy Cross College and Saint Mary's College campuses with everything from simple to elaborate dessert creations for special events to breads, breakfast pastries, wedding cakes and much more.

Before the pandemic disrupted our normal work, we provided baked goods and desserts for all University Catering events, North and South Dining Hall, Siegfried Dining Hall at Holy Cross College, ten express coffee shops, the five priest residences, Legends, the Morris Inn, as well as our dessert and gelato shop (Hagerty Cafe) for which we make specialty desserts, pastries, gelato and sorbet.

My assistant Kala Napier and I lead a team of seven amazing bakers/miracle workers who help make it possible to provide our Notre Dame family with their sweets. (I would like to give a shout-out to my team members Allison Goffeney, Cassie Hankins, Chasity Rockwell, Heather Freet, Mark Lepay, Matt Hawkey and Mindy Campbell.)

What has this academic year been like for you and your team?

We produce baked goods for four dining halls (which now includes Noble Family Dining Hall at Saint Mary’s), the priest residences, Hagerty Cafe and our students in quarantine and isolation. This year we introduced a new menu featuring scratch made croissants, muffins, breakfast breads and more. We’ve had a lot of training recently and the team is doing a fantastic job and takes pride in the products we provide.