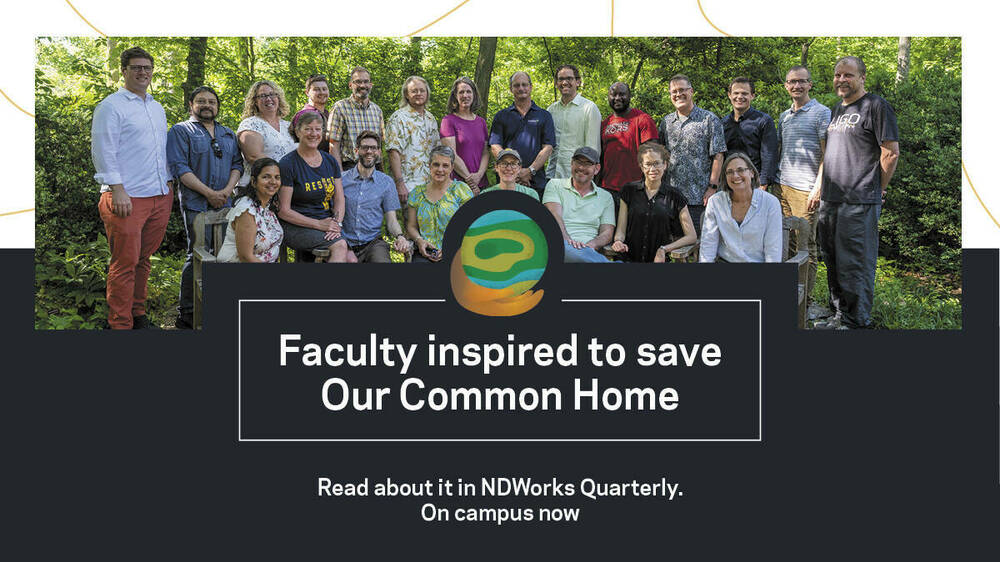 Jennifer Tank is an aquatic ecologist. More specifically, she researches how fertilizer runoff impacts freshwater ecosystems, and she partners with local farmers on solutions.

She’s passionate about things you can’t see, like nitrogen and phosphorus in water, and will tell you charismatic megafauna (large animals) generally do not move her ⁠— until this summer.

Tank was in Greenland at a remote field station researching greenhouse gas emissions in streams and rivers in the High Arctic. Other researchers from around the globe were there too, working on their own projects. The field station staff warned them to beware of polar bears.

“They said encounters with bears have happened rarely in their 30 years working there, so they didn’t anticipate seeing any up close,” said Tank. “But this year, three polar bears were less than a mile from the field station the entire time we were there.”

“Seeing the bones in the hips and shoulders of this starving adult polar bear, and not knowing whether next year will be any better, moved all of us. Whether we study plants, water or mammals, it moved us all." — Jennifer Tank, the Ludmilla F., Stephen J. and Robert T. Galla Professor of Biological Sciences and the director of the Notre Dame Environmental Change Initiative

They were there because there was no sea ice.

“The bears could not hunt for seals, which is what they normally do off the remnant sea ice during the summer,” said Tank, who took the photo of the bear.

“Seeing the bones in the hips and shoulders of this starving adult polar bear, and not knowing whether next year will be any better, moved all of us. Whether we study plants, water or mammals, it moved us all,” she said.

Tank, the Ludmilla F., Stephen J. and Robert T. Galla Professor of Biological Sciences and director of the Notre Dame Environmental Change Initiative, shared this story as a member of a faculty panel assembled on Sept. 8, to set the stage for this year’s Notre Dame Forum, titled “Care for our Common Home: Just Transition to a Sustainable Future.”

The forum is centered on Pope Francis’ 2015 encyclical, Laudato Si’: On Care for Our Common Home.

“This encyclical is addressed to all people, not just to Catholics. It attempts to be in dialogue, in conversation with people of all faiths and none,” said Rev. Robert Dowd, C.S.C., vice president and associate provost for interdisciplinary initiatives. He spoke before the first faculty panel held Sept. 7.

It’s not uncommon for popes and bishops to address big societal issues rather than matters internal to the life of the Church.

“For example, papal encyclicals have focused on the economy and political structures, and this one does too. There have been encyclicals focused on war and peace and nuclear disarmament,” Father Dowd said.

Laudato Si’ is a statement on what’s happening to Earth. Global warming, caused by emissions of greenhouse gases from human activities, is upending the world’s climate.

“The pope points to the extinction of species of animal and plant life, the growing gap between the rich and the poor, and unsustainable consumption patterns in certain parts of the world. … He denounces what he calls a throwaway culture that prizes convenience and pleasure over all things. He rejects an interpretation of the Bible that justifies a kind of anthropocentrism that excuses the abuse of the non-human created order⁠ — animals, plants, the earth, soil, water,” Father Dowd said.

“I read Laudato Si’ and I feel as though Pope Francis is speaking specifically to us at Notre Dame.” — Alexander Dowling, assistant professor of chemical and biomedical engineering

Perhaps the most important message of the document is that humans are part of the created order, not above it, and every living thing is connected and dependent on each other⁠.

And since everything is closely interrelated, the pope says, “today’s problems call for a vision capable of taking into account every aspect of the global crisis.”

In a higher education setting, Father Dowd said, the encyclical amounts to an invitation to embark on more interdisciplinary work.

“I read Laudato Si’ and I feel as though Pope Francis is speaking specifically to us at Notre Dame,” he said. “We’re one of the largest, most successful Catholic research institutions. Can’t we show the world how to navigate the complexities between interconnected engineered, natural, and social systems as emphasized in Laudato Si’? I think he’s calling us to do that.”

“Laudato Si’ has offered me a way to think about my research in relation to the University’s mission in very exciting ways. ... It’s given me a way to chart my scholarly career and aspirations, using it to orient my research interests,” Specht says.

The encyclical also spoke to Tank.

“Laudato Si’ articulated and emphasized in the most beautiful way what I knew in my heart was missing in my research and that was the intersection between ecology, that I have been studying my entire academic career, and the social sciences⁠ — what motivates humans to do something? What will motivate a farmer to change his practices?” Tank said.

“Today’s problems call for a vision capable of taking into account every aspect of the global crisis." — Pope Francis, Laudato 'Si: On Care for Our Common Home, 2015

That’s where the opportunities for groundbreaking research reside, at the intersection of disciplines.

“The University of Notre Dame is uniquely positioned to address the most pressing needs facing humanity,” said Rev. Austin Collins, C.S.C., vice president for mission engagement and Church affairs. “Climate change, and its impact on the poorest and most vulnerable in our society, cries out for concerted and focused attention from all sectors, but most especially from a global Catholic research university which seeks to be a place where learning becomes service to justice.”

And this is the perfect time to propose big ideas, according to Marie Lynn Miranda, the Charles and Jill Fischer Provost.

As the University embarks upon its next strategic planning cycle, the Office of the Provost is leading the “Moment to See, Courage to Act” initiative, which calls all members of the Notre Dame community to ask themselves, “What do you see and how will you act on that?”

“Global issues related to the environment, climate and sustainability were front and center during Phases 1 and 2 of this initiative, which focused on what we see as scholars. We now shift to Phase 3 where faculty from across the University are collaborating to identify the major endeavors the University should undertake,” Miranda said.

While science and engineering might seem to be obvious disciplines for education and discovery related to climate change, Miranda noted, "At Notre Dame we are working to address the various causes and effects of this crisis through architecture, business, global leadership and change, the law, and the liberal arts as well."

Tank has some big ideas of her own.

“I hope that in our ‘Moment to See, Courage to Act’ we are thinking about long-term partnerships where we all move forward together,” Tank said.

“Notre Dame is embedded in a larger community. I think we’re at a point, ready and poised to make some really new and novel partnerships with our surrounding community, both rural and urban, at a much larger scale. I think we could make a huge amount of change starting with small individual choices, and moving to systemic, regional types of changes.