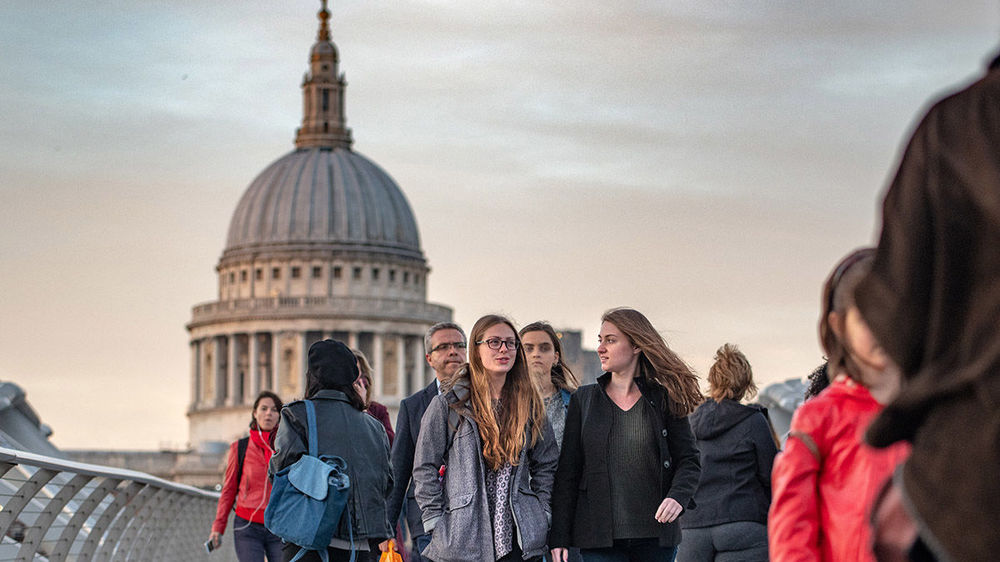 The Notre Dame London Law Program was born in the fall of 1968, with the idea that law students would become better lawyers if their legal education provided them with a global perspective.

Over the past half-century, more than 1,500 students from Notre Dame Law School have studied in London for a semester or a full academic year. It is the oldest study-abroad program offered by an American law school and the only full-year London program approved by the American Bar Association.

When the University dedicated a new facility for the program in 1983, Notre Dame President Rev. Theodore M. Hesburgh, C.S.C., said, “It’s a marvelous thing for young lawyers to be citizens of the world and to know how law is a force for peace, because it’s for justice.”

In many respects, the London Law Program’s relevance has only grown over the decades as globalization has resulted in a world where people have more and more connections that transcend borders.

“The world economy and legal systems are coming together under globalization,” said Michael Addo, director of the London Law Program. “Effective legal practice requires any lawyer to step out and see how the rest of the world operates. London provides that as a global hub for legal scholarship and legal practice.”

The Law School and Notre Dame International celebrated the 50th anniversary of the London Law Program throughout 2018 with speakers and events at Notre Dame’s London Global Gateway near Trafalgar Square. The culminating celebration was a Golden Jubilee, held in London over four days in late October, with events for alumni, students and faculty of the program.

Lord David E. Neuberger, former president of the Supreme Court of the United Kingdom, delivered the keynote address at the Golden Jubilee dinner.

“The idea of giving law students a proper understanding of other countries by coming here, and other jurisdictions by studying around the world, is a very noble one,” Neuberger said.

“It makes the student a more civilized person, generally, a more informed person, a more understanding person — which is particularly important in these times,” he explained. “But I think it also makes you a better lawyer. If you know about other systems of law, you can put your system of law in context.”

Students who study in London have opportunities to learn inside and outside the classroom while participating in the program. They can take study trips to British courts and visit international organizations in Brussels and Geneva. They can also learn about the practice of law through externships in which they work under the supervision of British barristers and solicitors.

Students who participate in the London Law Program will frequently describe it as a life-changing experience.

“Many students who come here have traveled all over the world, but you’d be surprised how many students have never left even their home state, much less the United States,” said Nell Jessup Newton, the Joseph A. Matson Dean and Professor of Law at Notre Dame Law School.

“They spend a semester or a year here in London, and I’ve seen them come back transformed. They’re more comfortable in their own skin, they’re more sophisticated. They have a much better sense of self and greater self-confidence. This translates for them into success in the rest of their careers.”

The program was the reason that Kimberly Schreiber, a member of Notre Dame Law School’s Class of 2020, chose to attend Notre Dame for law school.

In addition to the opportunity to study American law at its roots in England, to experience London’s culture and to learn about British and European legal practice through study trips and externships, she said, it has also been fulfilling to learn from the program’s diverse professors.