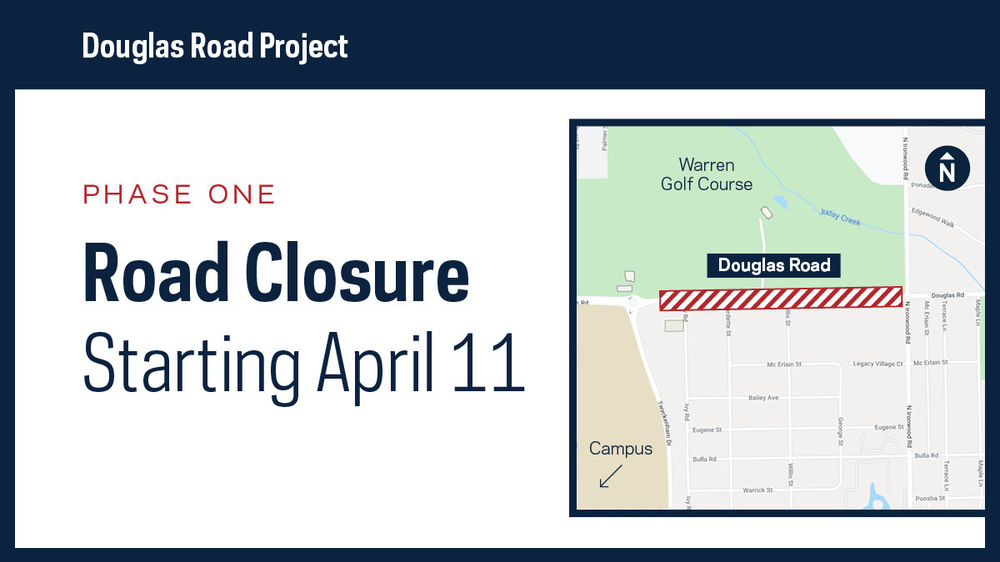 According to St. Joseph County officials, the closure of Douglas Road between Twyckenham Drive and Ironwood Road will begin this coming Monday, April 11 — a week earlier than most recently projected. This is Phase 1 of the project. New information will be provided to the campus community as the University receives it, including the start date for Phase 2, which will close the intersection of Douglas and Ironwood for several weeks.

Phase 2: In the late spring, the intersection of Ironwood and Douglas will close in all directions for several weeks to add turn lanes and upgrade the traffic lights.

This year’s improvements include the addition of lighting and the extension of a pedestrian pathway from the Warren Golf Course east to Ironwood Road.

When the project is completed next year, Douglas Road will be four lanes with ample turning lanes at both Ironwood and Indiana 23 — intersections that get congested during peak traffic times. The Indiana Department of Transportation is overseeing construction.

Throughout this year's Douglas Road construction, visitors to Warren Golf Course will only be able to access the property from the west.

The main entrance to the golf course is on Douglas Road between Twyckenham and Ironwood — the stretch of Douglas closed during Phase 1. During that time, there will be a temporary entrance immediately east of the intersection of Douglas and Twyckenham.

The main entrance to Warren is expected to reopen at the beginning of Phase 2, but the golf course will still only be accessible from the west.