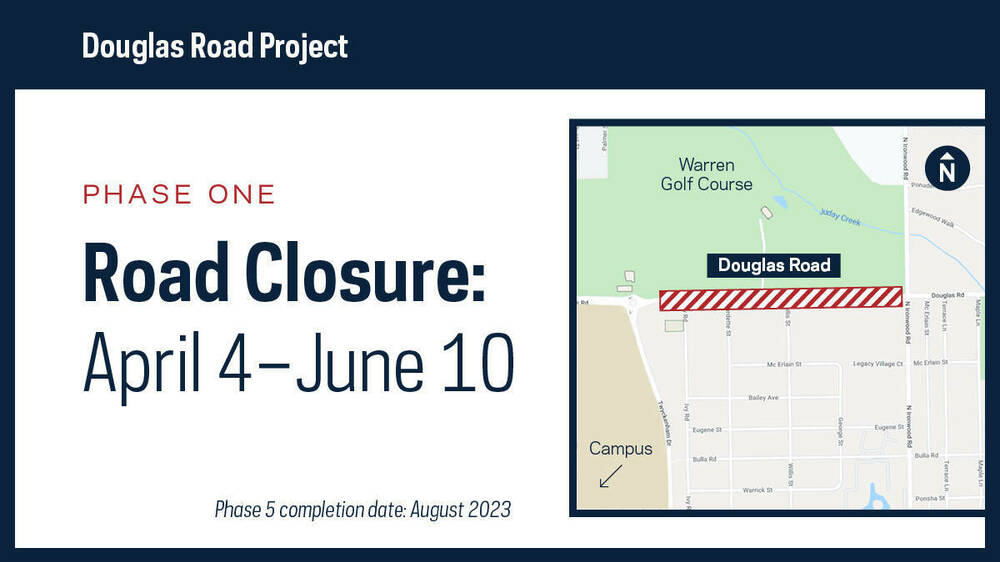 If you live north and east of Notre Dame, you may be accustomed to taking Douglas Road to and from campus. It’s time to find another route. From early April to mid-October, Douglas Road, the main artery at the north end of campus, will be improved and widened from Twyckenham Drive through the Ironwood Road intersection.

Douglas Road will be closed to east/west traffic from Twyckenham Drive to Ironwood Road from Monday, April 4, through Friday, June 10. During the second phase of the project — from Monday, June 13, to Friday, Oct. 14 — the intersection of Ironwood and Douglas will be closed in all directions to add turn lanes and upgrade the traffic lights.

This year’s improvements include the addition of lighting and the extension of a pedestrian pathway from the Warren Golf Course east to Ironwood Road. When completed next year, Douglas Road will be four lanes with ample turning lanes at Ironwood and Indiana 23 — intersections that get congested during peak traffic times. The Indiana Department of Transportation is overseeing construction.The construction will also impact traffic patterns for major University events, including the Garth Brooks and Billy Joel concerts, two Commencements, Reunion, move-out and move-in dates and possibly three home football games. It will also impact how golfers access the Warren Golf Course.

The main entrance to the golf course is on Douglas Road between Twyckenham and Ironwood — the stretch of Douglas closed during Phase 1. During that time, there will be a temporary entrance immediately east of the intersection of Douglas and Twyckenham.

The main entrance to Warren is expected to reopen at the beginning of Phase 2, but the golf course will still only be accessible from the west.

The Douglas Road improvement project has been in the making for nearly 10 years. “I look forward to construction beginning on the widening of Douglas Road. While the project may present some challenges, this is a long overdue and necessary improvement that will benefit the campus and broader community for decades to come,” said Tim Sexton, associate vice president of public affairs.

In 2012, the University improved and widened Douglas Road from Twyckenham west to Indiana 933, adding three roundabouts. As part of the project, Douglas was rerouted from Moreau Drive north to Juniper Road and west to the Indiana Toll Road entrance at 933.