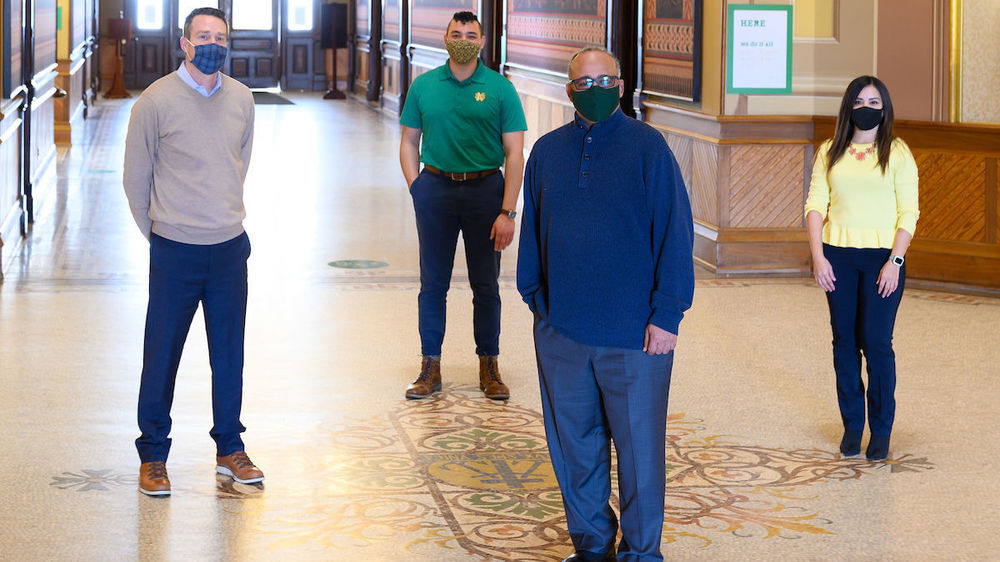 Megan Akatu was overcome with shock, sadness and fear in the wake of the May 25 killing of George Floyd, a Black man, at the hands of police. Racial tension in the country was boiling.

“I look at my son, especially, and think he could be walking around one day and someone could decide his life isn’t worthwhile just because of the color of his skin,” she said. Three-year-old Eli is one of Akatu’s two biracial children, who are her biggest motivators to work toward racial justice.

A phrase in her social media feed moved her to action.

“It said, ‘Ally equals action,’ and I knew I had to do something,” she said.

Soon after, Akatu, director of business development with Notre Dame’s University Enterprises and Events (UEE), found herself in a listening session she helped organize as a co-chair of the UEE’s diversity efforts led by Eric Love, staff diversity and inclusion director at Notre Dame.

Love leads the Office of Human Resources’ charge to engage staff through efforts that include the Diversity Education Volunteer program. The program’s first iteration started four years ago with about 20 volunteers. In the summer of 2020, interest in the program surged. When Love put out a call in October for more volunteers, more than 300 faculty and staff members responded.

At the direction of University President Rev. John I. Jenkins, C.S.C., and through his call to build a more diverse and inclusive Notre Dame, the University established the Oversight Committee on Diversity and Inclusion in 2013. Programming across campus soon followed, with Love’s workshops and the University’s other efforts such as the Klau Center for Civil and Human Rights, Building an Anti-Racist Vocabulary and the College of Arts and Letters’ Initiative on Race and Resilience.

Love’s diversity education volunteers, or DEVs, are trained to co-facilitate the presentations and sessions for the workshops. Love established the DEVs with the primary purpose of harnessing interest in diversity and inclusion among staff. He also saw an opportunity to schedule more workshops with different presenters.

“The more people can engage in diversity and inclusion work, the better; more ripple effects take place,” Love explained. “If a couple of volunteers help me a few times, then they start presenting in their department meetings, we have multiple ripple effects going on that start to reach out into the community. And the more voices, the more people we have working on these issues, the better we all are.”

The training begins with facilitators leading a discussion with question prompts to get people comfortable sharing about racial issues.

To become a DEV co-facilitator, participants attend listening sessions with breakout rooms for small group dialogue. Participants are also asked to attend other programs including We Are All ND, Multicultural Competencies and Hiring Game Changers.

Love will offer the next listening session during Walk the Walk Week. In March, formal training will begin for co-facilitators, which will cover bias, civil discourse, multicultural competencies and microaggressions.

Love believes the huge response — about 150 people regularly attend the training sessions — is not only due to the racial climate in the nation, but also because the pandemic is disproportionately affecting Black and Brown communities.

“The pandemic has exposed health inequities and disparities in our nation,” he said.

“But the most salient issue was George Floyd. It was on the news in front of all of us while we were in lockdown.

“Previously, some would say, ‘If they would just comply,’ but we saw a man begging for his life. It was unnecessary for him to be killed. It was a huge awakening for many.”The awakening led to the summer’s marches for racial justice across America, including on campus with Father Jenkins leading the “Prayer for Unity, Walk for Justice” event on June 2 and “The Rally” led by the Irish football team, commemorating Juneteeth and supporting Black Lives Matter. (Click here for video.)

"This tells me people want to be a part of the solutions we need," Love said.

DEV training includes how to respectfully converse with people of differing opinions, and Akatu is learning the tools for engaging with different perspectives.

“I want to help people have these discussions because when we’re not having the discussions, we’re not coming together,” she said. “But at the end of the conversations, we have come together and can be at a closer place.”

While there isn’t a shortage of potential topics, the deadly insurgence of the U.S. Capitol on Jan. 6 may be one the DEVs will discuss as practice during upcoming training.

“I knew people who were attending the rally, and it was heartbreaking and scary because there’s evidence of white supremacy,” Love said. “You can raise an attack on the government as a white person and get better treatment than someone (white or Black) who is protesting for civil rights.”

Kevin Barry, director of Notre Dame Learning’s Kaneb Center for Teaching Excellence, said the insurgence makes it clearer than ever before that we must confront white supremacy.

One way to do that is through meaningful conversations about unjust structures and practices, he said.

Barry is using his DEV training to find the intersection between the DEVs and the work he does with the Seeking Educational Equity and Diversity (SEED) program. The SEED curriculum helps faculty and staff understand the various experiences they and students have in order to transform the diversity climate and offer a more inclusive educational experience.

“Participation in the DEV program is an important opportunity to learn about and contribute to ensuring equity and justice for all at Notre Dame,” he said, “and build relationships with others who are committed to working on these issues.”

Love said that the University’s ethic to treat everyone with human dignity and respect, tied to Catholic social teaching, compels him to teach tools of productive dialogue. “That ethic means even when we disagree, we have to remain engaged if we want to transform our campus.”

A path to healing

He was raised by a white, Irish Catholic mom from Chicago and a Black dad from a southwest Michigan Pentecostal family. Witherspoon grew up witnessing different versions of the American dream.

“The prevalent issues we’re facing and addressing have been central to my lived experience,” said Witherspoon, UEE business development team member. “Being both Black and gay, activism found me first, not the other way around, because the quality of my life has often been dependent on the success of my activism.”

Love believes becoming a campus activist, whether through volunteering, listening or presenting sessions, can be a part of healing for anyone who is in pain. And people are in pain for different reasons, he added.

“I did quite a bit of work with the Notre Dame Police Department this summer and some officers are being treated really poorly. People driving by and yelling out that they’re racists or white supremacists,” Love said. “It’s affecting them in ways that it didn’t affect them before.”

“And I mean everyone,” he said. “The work that I do aligns very well with Catholic social teaching and the Catholic ethic that we treat everyone with human dignity and respect, and it includes the LGBTQ+ community.”

While the emphasis has been on racial equality most recently, the program supports all people who are marginalized.

As a UEE diversity co-chair, and an activist for many years, Witherspoon believes activism must come in many forms. Today, for him, it’s taking the form of educating his friends and Notre Dame colleagues about their own biases.

“Inadvertently or not, we all participate in different systems of oppression,” he said. “I’m really proud of what we’ve accomplished so far and are providing opportunities for people in our division to access resources to do this work personally, while also being honest about the ways we may be contributing to inequity.”

The Spirit of Inclusion is part of the Notre Dame ethos that is woven into Love’s programs.

“I’m not challenging anybody’s spiritual beliefs or religious beliefs,” Love said. “We don’t have to understand everyone. We don’t have to agree with everyone. But when you’re on campus, you have to treat everyone with dignity and respect.

“And if you do that, you probably will open yourselves up to some great colleagues that you can learn something from, be inspired by and do great work with,” he said.

Akatu said it is incredibly important to hold herself accountable with the UEE diversity initiative so it’s not just another initiative that loses traction over time.

“I think that was my biggest fear — especially as a white person stepping into this — that I’m assigned as a co-chair and then nothing happens,” she said.

But she has been encouraged that the work so far is tangibly helping Notre Dame’s diversity efforts. The employee engagement team sends out a quarterly survey to all UEE employees, and the results show consistent increases in culture scores and employee engagement across the division.

“I can feel the importance of this time and this work, right now,” Akatu said.

She urges all employees to participate in the DEV training for personal and professional growth, citing the most popular UEE session, How to Raise Anti-racist Children.

“Even if you can’t effect change within your department, it will still change you and your heart.”