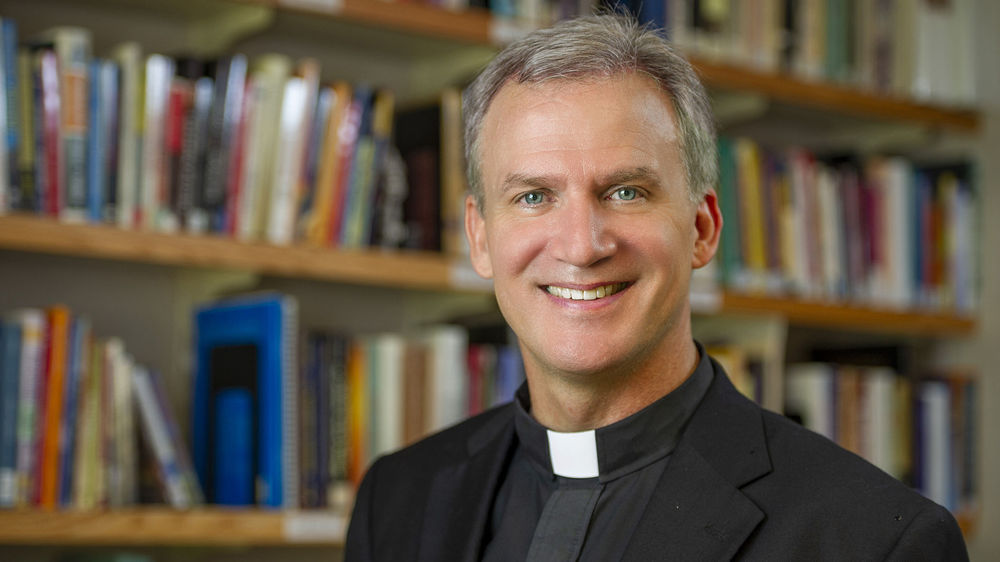 It is sometimes said that among the most important days in a person’s life are the day he is born and the day he finds out why.

For newly appointed vice president and associate provost Rev. Daniel Groody, C.S.C., one of those days came in 1989 while he was pursuing graduate studies in Berkeley, California. When he woke up that morning, he looked out the window of his small basement room and noticed a homeless man lying on the sidewalk just outside.

“Physically,” Father Groody says, “we were no more than 18 inches apart, but existentially, we lived in two totally different worlds. I have spent the better part of the last three decades trying to work out that distance.”

Since that fall morning, Father Groody has traveled nearly 2 million miles working to bridge the distance between the rich and the poor, the heart and the mind, and the life of faith and the problems of the modern world. His interactions with the homeless, refugees, immigrants and other marginalized people have been the subject of books and articles translated into eight languages and award-winning documentaries. Yet at his core this mission emerges from his own inner journey and its connection to the outer journey.

“I sometimes describe myself as a ‘cardiologist’ because I help people to deal with what’s happening in the depths of their hearts and what it means for their life’s direction,” Father Groody says. “I try to help them become more free, wise, authentic and loving. In today’s fast-paced, frenetic and anxious world, we are losing touch with our true selves and our call to engage the world and its needs.”

Father Groody’s research, teaching and writing have taken him to the far corners of the globe, mostly to areas characterized by conflict, suffering and human vulnerability. From Central and South America to the Middle East, Africa, Europe and parts of Asia, he has sought to help people to find hope in the midst of hopelessness, to believe amidst unbelievable circumstances, and to trust God in what would seem like the most godless of environments.

“Father Dan’s work with migrants and refugees around the globe links Notre Dame to the presence of God among marginalized persons,” says Timothy Matovina, professor of theology and chair of the theology department. “His leadership helps bring Notre Dame to the world, and it also brings the world to the heart of our mission of Catholic education.”

Father Groody earned his bachelor’s degree from Notre Dame, a master of divinity degree and a licentiate in sacred theology from the Jesuit School of Theology, and his doctorate in theology from the Graduate Theological Union. During 2007 and 2008, he served as a visiting research fellow at the University of Oxford’s Refugee Studies Centre.

Since 2000, Father Groody has taught courses and conducted research at Notre Dame. He has also collaborated with the U.S. Congress, U.S. Conference of Catholic Bishops, World Council of Churches, the Vatican and the United Nations on issues of theology, globalization, migration and refugees.

In 2010 he was awarded the Catholic Charities Centennial Medal for his contributions to reducing poverty in the United States. His skill in the classroom at Notre Dame was recognized with the Joyce Award for Excellence in Undergraduate Teaching in 2011, and in 2012 he was named the priest of the year from the National Federation of Priests’ Councils, which represents more than 26,000 priests across the country.

One of the more popular classes Father Groody teaches at Notre Dame is “The Heart’s Desire and Social Change.” The course is a synthesis of what he has learned on his personal journey and one of the most important he has to offer students.

“In the course, I try to help students discover their most authentic selves by looking at the enduring human questions of life and their response to them,” Father Groody says. “I want to help them discover their core passions and find their own energies and unique gifts so they can make a difference in the world.”

“Father Dan has a remarkable gift of being able to connect with all types of people on a very personal level,” says Tom Schreier, founding director of Notre Dame’s Inspired Leadership Initiative. “In doing so, he has a profound impact on students — not only on undergraduates, but also on the senior fellows who attend the Inspired Leadership program and many others.”

Earlier this year, Father Groody was elected a Fellow and Trustee of the University, and this fall he will begin to serve as a vice president and associate provost.

In the new role, he plans to continue teaching and serving as director of the Global Leadership Program within the Kellogg Institute for International Studies at the Keough School of Global Affairs and as adviser for discernment and discovery for the Inspired Leadership Initiative.

If he sounds like a busy man, he is. “But no busier,” he insists, “than others working and teaching at Notre Dame trying to make this the special place that it is.”

Despite the sometimes hectic schedule, daily prayer and reflection are at the heart of his activities and the inspiration from which all his work flows. When schedule and travels allow it, he also breaks away to pursue his love of downhill skiing, hiking and woodworking.

On his move into higher education administration, Father Groody says, “This new ministry is a surprising change, but I embrace it as a new adventure. At its core, it is about service and a new opportunity to live out my calling as a Holy Cross priest and an educator in the faith.”