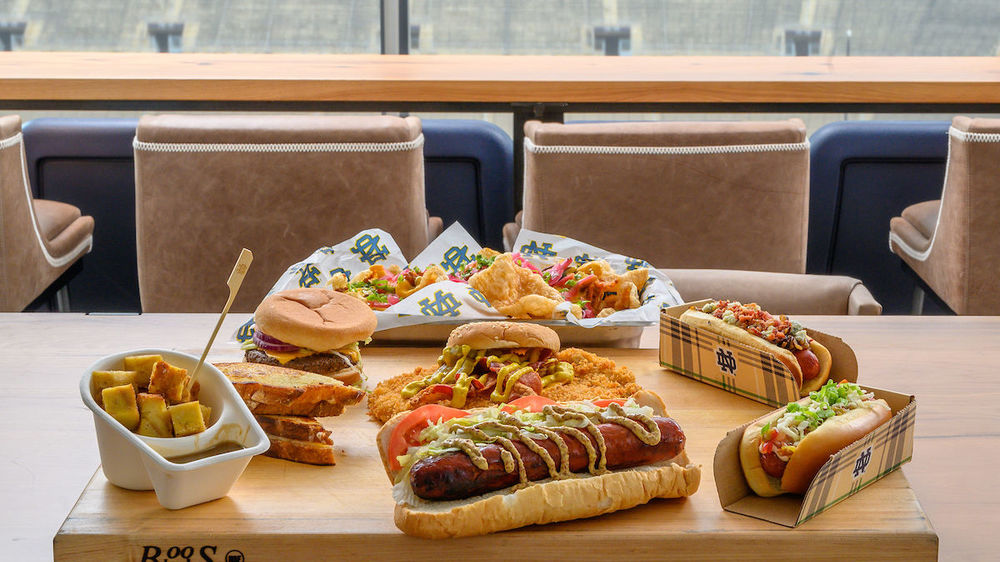 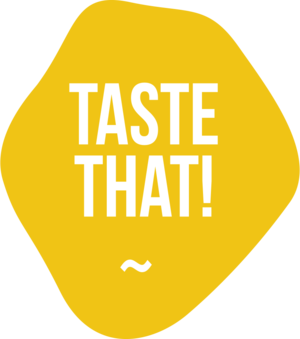 Warning: This is not your grandfather’s hot dog. Gone are the days of a skinny hot dog on an insubstantial bun. The Notre Dame concessions team, powered by Levy, has taken game day cuisine to the gastronomical end zone — and scored big. Chef Travis Johnson, certified executive chef over culinary operations, brings his 18 years of college experience, raising the culinary concession stand game. In addition to the regular fare, this year fans will find a variety of new items to hold their attention during timeouts and halftime. In addition to the Notre Dame Dog or “Domer Dog,” this home season kicks off with the addition of a “versus dog” for each home game opponent.

Joining me for a little pre-game food scrimmage to sample some of this season’s offerings were Shirley Lee from Custodial Services, Alison Thigpen from Game Day Operations and Matt Cashore from Marketing Communications. We kicked off with the Domer Dog, a signature stadium, straight-out-of-Chicago Eisenberg hot dog that’s been barking since 1929. Served on a brioche bun, this dog came to play with caramelized onions, blue cheese (yes, that veined, crumbly, pungent, not-just-for-salads mainstay) and crispy bacon bits. I ask you, what isn’t better with bacon on it?

And what could rival a Domer Dog but that week’s on-the-field rival? The home opener featured the New Mexico Dog, with the same signature stadium hot dog. The toppings were switched out to pico de gallo, green chiles, chipotle aioli, mozzarella and green onion — almost enough to make you want to root for the other team. 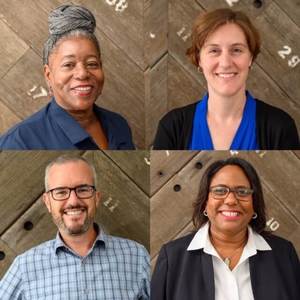 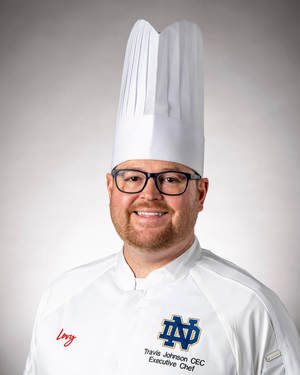 With 25 new items making an appearance on the menu this season, you could expect to find not just a hamburger, but a Smash Brisket Burger — a house burger blend of beef and brisket, smashed and grilled with melty classic American cheese, finished with lettuce, tomato and onion on a toasted, seeded hamburger bun.

Chef Johnson spent several seasons in New Orleans and it shows with his Andouille Po’Boy — a smoked andouille sausage fully dressed and topped with Zatarain’s creole mustard served on classic French bread. Found at the new Cajun stand, this po’boy is anything but “po,” so bring your appetite or plan on sharing this one. “The sausage was bold-flavored, but not so much as to trouble those who don’t like spicy food,” says Cashore.

If you can’t decide what to get, call an audible and go for that old-school classic — Indiana Grilled Cheese. Made with white cheddar and creamy bechamel sauce combined with alpine cheeses on toasted sourdough bread, this sandwich will make you want to go back to school.

And if we are doing old-school, try the Midwest Inspired Pork Tenderloin: It’s a better-than-classic crisp pork tenderloin spilling out of a sesame seed bun. The tenderloin is dressed in jalapeno yellow mustard, sweet and spicy house pickles, and American cheese, with smoked bacon. “I don’t know if I would have picked all of those ingredients if I were building a sandwich,” says Thigpen of her No. 1 choice. “But the combination of flavors was fantastic.”

One bite of the oversized no-bun-big-enough tenderloin will forever redefine for you the word “crispy.” This sandwich was made to retain its crunch from the concession stand back to your seat, and the development of it included timing that trek. “When you get your sandwich, you’re saying to yourself, ‘It looks good, it looks good,’ all the way to your seat. And when you sit down, it still looks and tastes good,” says Johnson. 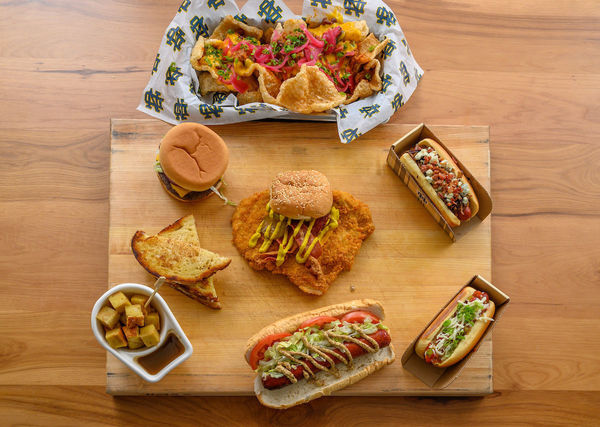 A favorite of Lee’s, the Pork Rind Nachos, is a dish you’ll want to keep to yourself, but there’s more than enough to share. Sure to be a fan favorite, these nachos come with fresh-fried chicharrones (pork rinds), Notre Dame chili, cheese sauce, cilantro crema, pickled onions and pickled radishes. And much like the pork tenderloin, the crunch is there from the first bite to the last. “I love the chicharrones,” says Lee. “It’s not real hot. Anyone can just eat it, and the cheese sauce blends very well with all the other toppings.”

What’s a high-scoring meal without dessert? It’s like a touchdown without the point after. Not to worry. The Signature New Orleans White Chocolate Bread Pudding Bites, tossed in cinnamon sugar and served with a caramel bourbon sauce, adds the extra point. The bites come in an enviro-friendly two-compartment container, perfect for dipping your bread pudding into the sauce. If you are talking to Thigpen, this is a shareable dessert. But trust me when I say this: Get more than one, because you won’t want to share. 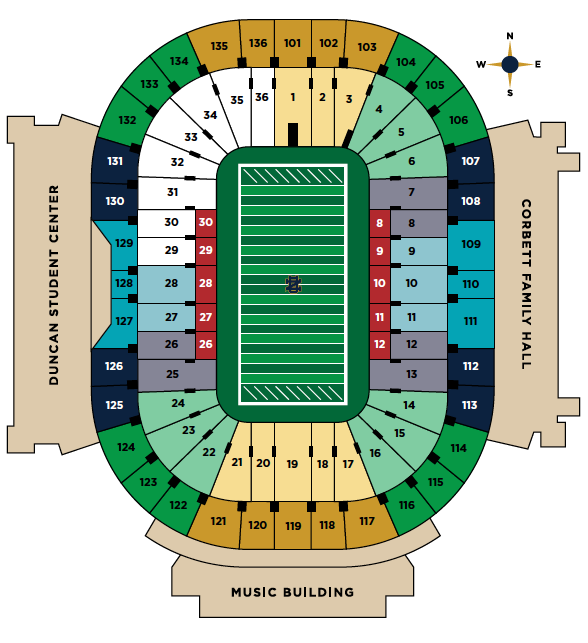 This is just the starting lineup for what promises to be a game day eating experience you won’t likely forget. Running from $4 to $12, these specialties can be found throughout the stadium, so make sure you take a look at the concessions map so you can get exactly what you want. There are many more choices and you can sub in gluten-free, vegan and vegetarian options. My advice for winning big on game day? Come hungry and hit the concessions stands early. Go Irish! 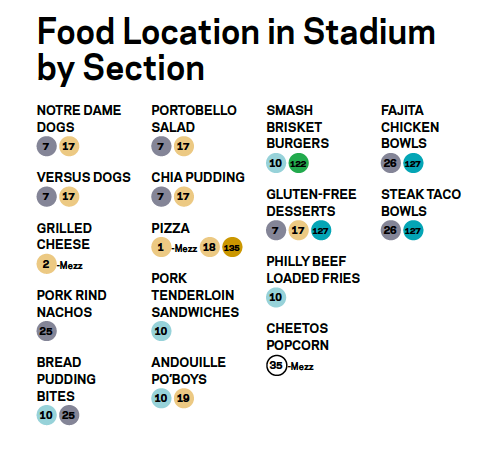 (Available on that game day; all start with signature stadium dog)

Average Game Day —
By the Numbers: