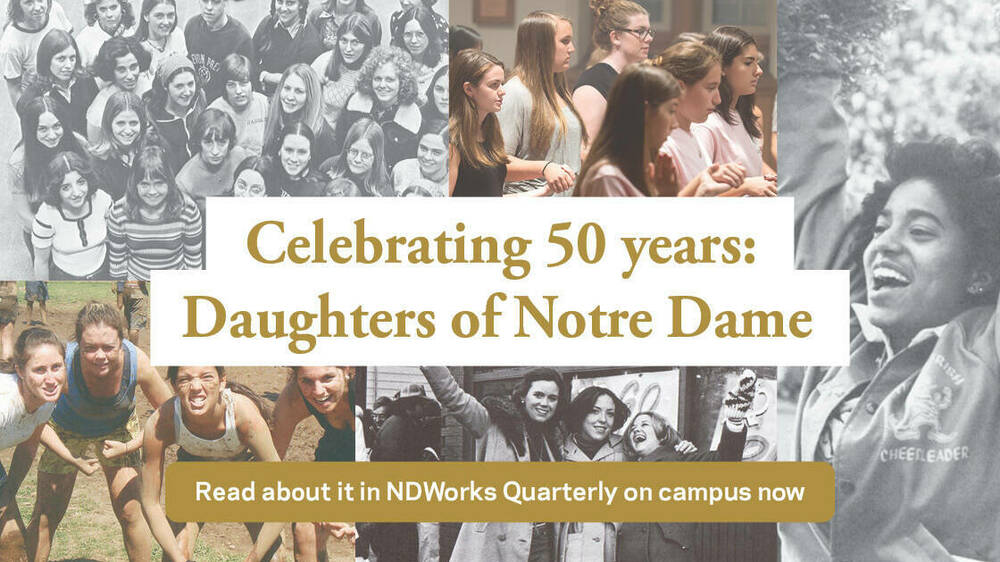 In anticipation of the 50th anniversary of Notre Dame admitting undergraduate women, the Notre Dame Alumni Association interviewed four alumnae who were members of the first undergraduate classes  at Notre Dame that included women.  Here are their stories.

Notre Dame is something of a family tradition for Beth Lavins Fitzgerald ’77. “I remember riding with my dad to the hardware store on a Saturday. Notre Dame football was on the radio. We were just little kids in the back seat, but we were cheering along and singing the fight song,” she said. “Notre Dame was not just a school, it was part of our lives.”

After all, her dad and three older cousins had attended the University. But since Notre Dame did not admit undergraduate women, Fitzgerald wondered where she would go.  Fortuitously, in the fall of 1972, Notre Dame welcomed its first  undergraduate class with women, just in time for her to be able to apply to her dream school.

The tradition continues today with nieces, nephews and other family members having attended the University. The decision to admit women made the dream of a Notre Dame education possible for many of them.

Notre Dame was one of several universities in the late 1960s and early 1970s that decided to admit female students.

“Notre Dame’s acceptance of women was very much in keeping with the culture at the time,” Fitzgerald said. “Dartmouth began to admit women, as well as Yale, Harvard, Penn and many others. It was necessary. If Notre Dame had stayed all male, I think it would’ve been a very weird experience here. Accepting women was important, in terms of progress.”

Not everyone was thrilled to have women at Notre Dame. Some male students saw women as competition, and they were right.

Rev. Theodore M. Hesburgh, C.S.C., president of Notre Dame from 1952 to 1987, noted in his autobiography, “God, Country, Notre Dame,” that for every woman the University admitted, one less man would be. He saw that as an advantage. “The admission of women had doubled our source of applicants and that enabled us to raise our admission standards even higher,” he wrote.

Fitzgerald wasn’t intimidated by the men on campus. Like other women at Notre Dame, she thrived.

“We clearly held our own in class. ... We were very competitive. I mean, you had to be in order to be accepted as a woman at that point in time,” she said.

Denise Crowley Brenner ’76, and her twin sister, Donna Crowley Campbell ’76, were in the first class of undergraduate first-year students that included women.

“I can remember in junior year of high school, looking at other colleges. We never looked at Notre Dame because it was not really in the  realm of possibility at that point,” Campbell said.

“But then Notre Dame decided they were going to admit women, and attending Notre Dame became the goal. I’ll never forget the day the Chicago Tribune came out with the headline ‘Notre Dame to become coed in fall.’ We were in the process of applying and it was like, my goodness, this is what we wanted.”

The day their acceptance letters arrived in the mail was one of great rejoicing.

“I think our dad was crying more than we were. He was very excited,” Brenner said.

“It was something that he bragged to all his friends about, that his daughters were going to be in the first class [of women] at Notre Dame,” Campbell said.

When they arrived on campus in the fall, they experienced ribbing from some male students.

“I remember some of the upperclassmen saying, ‘My brother could have gotten in if you weren’t here,’” Campbell said. “But I think the females that were there felt that they deserved it. So it wasn’t a question of we ‘took someone else’s place.’ We deserved to be there.”

In the case of Dr. Jan Sanders ’83, her parents were more interested in Notre Dame than she was.

“Notre Dame had not made it to my list. Not that it wasn’t a greatschool, but it wasn’t a diverse school, and it was a Catholic school. I’m not Catholic and I’m diverse,” said Sanders, who is Black.

“My parents, who were very much invested in education, wanted me to attend a college where I not only could get a good education, but could also have a great social environment.”

They believed Notre Dame  would offer exactly that for their daughter. After all, it was led by Father Hesburgh.

“My parents were very impressed with his commitment and stance and contributions to the civil rights movement,” Sanders said.

So in her junior and senior years of high school, she decided to check out Notre Dame, spending a couple of weekends with two cousins who were students.

“I found that it was a very nice place, and that I felt that I might be able to fit in. And the allure then became, well, maybe I could do this, and perhaps by me wanting to study a STEM major, a competitive major being in biology, and then moving on to medical school, a smaller university might be more advantageous for me to attend,” said Sanders, who became a pediatrician.

She remembers Father Hesburgh fondly as someone who did not merely talk the talk about inclusion, but walked the walk.

“Father Hesburgh wasn’t afraid to make a tough decision and offer an unpopular opinion,” she said. “I remember ... a student, Phyllis Washington Stone, who’s now a Trustee, who was the first Black cheerleader at Notre Dame. When she tried out, she was not chosen, and she definitely deserved the position. And Father Hesburgh stepped in and appointed her as cheerleader. ... So, he did some very unpopular things, but was very committed and very visible for not only Black women, but Black men on campus as well.”

Sanders notes that while the 50th anniversary of welcoming women undergraduates to Notre Dame is something to celebrate, there’s still work to be done.