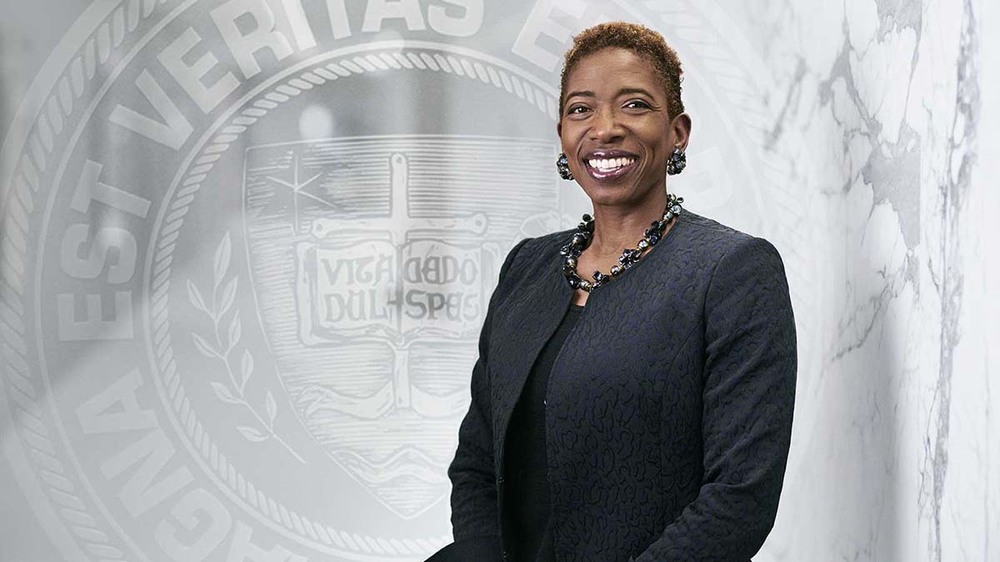 Carla Harris, vice chairman of wealth management and senior client adviser at Morgan Stanley — as well as a celebrated gospel singer, speaker and author — will be awarded the University of Notre Dame’s 2021 Laetare Medal, the oldest and most prestigious honor given to American Catholics, at the 176th University Commencement Ceremony on May 23 (Sunday).

Throughout her exceptional career, Carla Harris has exemplified the highest ideals of American enterprise, championed the principle that opportunity should never be denied on the basis of gender or race and generously mentored countless rising leaders,” said Notre Dame President Rev. John I. Jenkins, C.S.C. “Enriched by her gifts as a singer and public speaker, her work in the competitive world of banking is firmly rooted in her commitment to service, developing the next generation of leaders and her Catholic faith.”

Harris began her career at a time when very few of her colleagues were Black or women, and her trajectory has been steadily ascendant. She was chair of the Morgan Stanley Foundation from 2005 to 2014 and is a member of the boards for Harvard University and the Walmart Corp.

In 2013, Harris was appointed by President Barack Obama to chair the National Women’s Business Council, an independent counsel to the president, Congress and the U.S. Small Business Administration.

Characteristic of Harris’ approach to her own success has been a mantra that has carried her beyond many obstacles and naysayers: “Never count yourself out.” Harris coaches others with a “negative motivation” approach, leveraging what people say cannot be done into energy to prove them wrong. She likewise understands her successes as a responsibility to help others, saying, “We are blessed so that we may be a blessing to others.

Consistent with this belief, Harris has mentored hundreds of associates and led efforts focused on promoting women and people of color in business. She oversees Morgan Stanley’s multicultural client strategy and helped build the company’s Multicultural Innovation Lab, which brings together companies on an accelerator program for innovative tech startups led by multicultural entrepreneurs.

Harris is the author of “Expect to Win” and “Strategize to Win,” which she wrote to share what she has learned about pathways to career success.

Harris began singing at age 9 at a fourth-grade talent show, and progressed to Baptist and Catholic church choirs in her teens, Harvard’s renowned Radcliffe Choral Society, the St. Charles Gospelites and her own band, Rhythm Company. She has released multiple albums and produced and performed sold-out benefit concerts at Carnegie Hall and the Apollo Theatre.

Born in Port Arthur, Texas, and raised in Jacksonville, Florida, Harris is the daughter of a school teacher and a commercial fishing boat captain. She attended Bishop Kenny High School and graduated with honors in 1980. When a guidance counselor suggested Harris avoid applying to Ivy League schools due to their competitiveness, she channeled this negativity into determination and applied to state schools as well as Ivies. She was accepted to all, but chose Harvard, where she graduated magna cum laude with a bachelor’s degree in economics; she later earned a Master of Business Administration from Harvard Business School with second-year honors.

In 2001, Harris married her high school sweetheart, Victor Franklin, at St. Charles Borromeo Church in Harlem, where she remains an active parishioner. The couple and their two daughters, Dakota and McKinley, reside nearby.

The Laetare (pronounced lay-TAH-ray) Medal is so named because its recipient is announced each year in celebration of Laetare Sunday, the fourth Sunday in Lent on the Church calendar. “Laetare,” the Latin word for “rejoice,” is the first word in the entrance antiphon of the Mass that Sunday, which ritually anticipates the celebration of Easter. The medal bears the Latin inscription, “Magna est veritas et praevalebit” (“Truth is mighty, and it shall prevail”).

Established at Notre Dame in 1883, the Laetare Medal was conceived as an American counterpart of the Golden Rose, a papal honor that antedates the 11th century. The medal has been awarded annually at Notre Dame to a Catholic “whose genius has ennobled the arts and sciences, illustrated the ideals of the Church and enriched the heritage of humanity.”