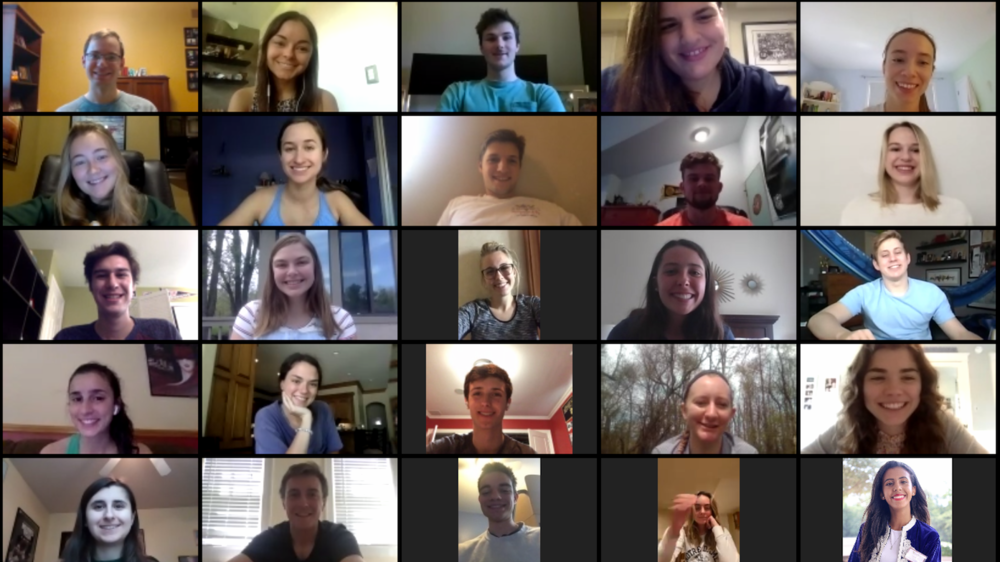 An Irish scone bake-off went viral. A TikTok challenge inspired kicking toilet paper like a soccer ball. An assignment to develop a literary walking tour of London became a walking tour for people in quarantine. Eleanor the Chihuahua became an Instagram celebrity.

Of Notre Dame students who had to transition to distance learning, the most dramatic change came for those who left their study abroad programs to go home halfway through the semester. Though it sounds difficult, students, faculty and staff found creative ways to maintain their immersion experiences abroad from their living rooms in Illinois, California or Michigan.

The Dublin and London global gateways, for example, both reached out to keep their groups together and maintain a sense of community, despite students scattering across time zones.

“Our decision — when the decision came to say this was over for our students — was to rebel internally,” said Eimear Clowry Delaney, assistant director of the Dublin Global Gateway. “It’s not over. It’s just going to be different. So the mantra we decided to roll with was, ‘You’re still part of our community. You’re still part of our program. It hasn’t ended just because you’re not physically with us anymore.’”

Or, as they say in the Irish language, “Is ar scáth a chéile a mhaireann na daoine” — “we live in community.”

It took some quick thinking in the two weeks they had to turn the program around. But Clowry Delaney says it was just a matter of energy, willingness and connection.

“I think we were instantly just like, OK, let’s put our heads together,” she said. “We all have different skill sets. We have some good characters.”

In the Dublin program, students take classes at various Irish universities, so the gateway serves as their home base, the place for “Irish chicken fillet” talk sessions and reflections with the campus ministry. While the gateway continued those sessions online, albeit without the famous baguette chicken sandwiches (aka Irish chicken fillet), students ran out of things to talk about from their homes.

That’s when it got creative: a Euchre card tournament and a daily TikTok challenge for students to post video clips.

“I made Irish scones, and we just shared the recipe online and it went viral,” Clowry Delaney said. “So lots of our current students and surprisingly a lot of our donors, Dublin donors from throughout the years, all started to bake the scones themselves. Some of the professors started doing it. So that was kind of magic, actually.”

Patrick Kollman, a biology major from Ann Arbor, Michigan, said the virtual (Irish chicken) “Fillets with Friends” talks were so good for keeping in touch with friends and staff that he broke the rule and started attending more than once a week. He also liked the virtual pub quizzes. In Ireland, pubs often put on trivia contests for patrons, with each table playing as a team, trying to answer questions like, “In the music industry, what were the Gibb brothers better known as?” (The answer: the Bee Gees). Dublin Gateway staff member Ciara Stagg organized elaborate pub quizzes via Zoom, where the 40 to 50 students playing submitted their answers through Google Forms. In one series of questions, students had to try to identify baby pictures of the staff.

“They had a really awesome social media presence,” Kollman said. “It definitely kept the community going despite being far away, so it was cool.”

Meanwhile, in London, where the gateway is the entire education and social experience, the staff created ways for students to interact through newsletters, Facebook and Instagram to stay connected. One fixture of the student experience in London is Eleanor, the furry Chihuahua of rector Daliah Bond in Conway Hall. When students had to leave early, Bond made sure they still got their dose of Eleanor via social media. It gave them the sense of greeting her as they walked into the residence hall.

Miho Koshi, a finance and economics major from Japan, had the gateway’s first internship with Mars Wrigley UK, the chocolate company, in London, where she took on a project to study gifting among millennials and Generation Z for a business that wants to encourage them to give chocolates. Koshi really felt a part of her team at Mars, which provided lots of chocolates for the workday, plus work-life balance exercises such as mindfulness classes. She worried about the future of her project after she left. But she updated her supervisor each week and received detailed comments and suggestions on her project slides.

“I think my supervisor really put her work into providing guidance as much as she can,” she said.

But Koshi said the bigger impact was the one-on-one Zoom conversations she had with Associate Director for Internships and Student Immigration Nick Brill, Director of Student Affairs Joshua Copeland and her professors — meetings she wouldn’t have needed if on site in London.

“We would not only talk about academics but also how we were doing, how they’re doing in London and how I was doing at the Morris Inn,” she said. Because her parents are in Shanghai, Koshi couldn’t return home in the pandemic and had to stay in South Bend. “So I think the Zoom meetings did shorten the distance between me and my professors because we had more casual conversations.”

Doctoral candidate Trish Bredar was teaching a class on literature and walking tours, with the intention that students would create and lead their own tours as the final exam. With students leaving London at mid-semester, she quickly pivoted.

“I introduced a hypothetical situation in which a global pandemic meant that no one could go on a real walking tour,” Bredar said. “So I asked them to create a digital resource where someone who is confined to their house could try and get some of the experience of a literary walking tour from the safety of their home.”

Elyse Boldt, a political science major from Chicago, was surprised. She thought they would be relegated to writing a paper remotely instead of designing a walking tour. In her final project on Virginia Woolf’s “Mrs. Dalloway,” she used quotes from Woolf’s diary about London, as well as the novel, to give a walking experience of Westminster Bridge, Big Ben, Houses of Parliament and other famous sites.

“At first I wasn’t looking forward to it because it would remind me of what we could have been doing together as a class, and what we were missing out on,” she said. “But then as I was doing my research, trying to pull these videos from locations of some of the places we had visited together as a class, and places I had seen in person while I was there, it was a great way to wrap up my semester.”

Madison Restivo, an economics and theater major from Bloomington, Illinois, chose Zadie Smith’s novel “NW” for her tour because it is set in working-class northwest London, a place where tourists — and students — don’t normally go. She dove into getting to know a place she never visited through YouTube videos, blogs and Google Maps Street View. In the end she created an experience written as if the tour guide were speaking to you as you flip through her slides, photographs and video links.

“I wanted to continue my experience a little bit farther and explore somewhere new,” she said. “I can’t really say that I feel like I was 100 percent there. I think that would be a little too optimistic. But it’s cool that we were able to adapt, and make the most of a situation that wasn’t ideal.”