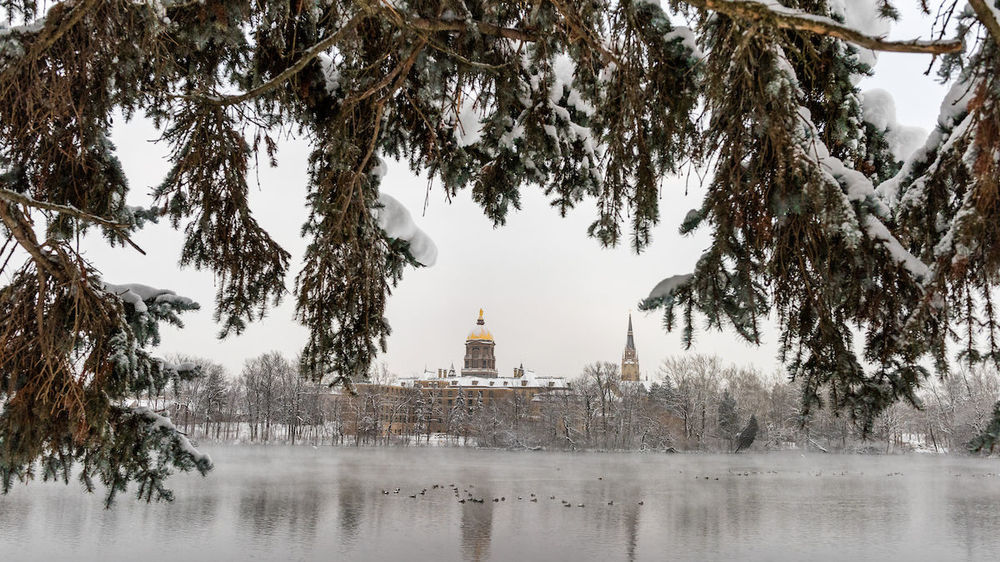 Campus was closed from 6 p.m. Tuesday, Jan. 29, through 1 p.m. Thursday, Jan. 31, due to extreme low temperatures caused by a polar vortex, which brought temperatures to a bitterly cold minus 20 degrees. Temperatures didn’t quite break the record — the coldest air temperature ever recorded in South Bend was on Jan. 20, 1943, when the city reached a low of minus 22 degrees. It’s very unusual for the University to close due to harsh winter weather, but it’s not unheard of.

Monday, Jan. 27, and Tuesday, Jan. 28, 2014: Campus was closed due to dangerously cold temperatures. That Tuesday, the high at noon was only 1 degree, with a low that night of 13 below zero.

Thursday, Nov. 13, 2014: The city received 12.3 inches of lake effect snow, breaking the previous daily snowfall record of 4.7 inches set in 1974. Campus stayed open but crews had to clear a foot of snow out of the stadium for the Saturday game against Northwestern.

Friday to Sunday, Jan. 7 to 9, 2011: A lake effect snow event before classes started disrupted South Bend with accumulations totaling 2 to 3 feet of snow in some areas. The total at the South Bend airport was 36.7 inches, with South Bend reporting 28.1 inches.

Blizzard of Feb. 1-2, 2011: Classes were canceled and campus closed for the first time since 2000 when the area had blizzard conditions and 14.7 inches of snow between Monday, Jan. 31, and Wednesday, Feb. 2, adding to South Bend’s record total of 100 inches of snow for the winter.

Thursday, Jan. 16, 1997: Gusting winds and nearly a foot of snow closed campus. The Observer reported that many area businesses were closed, including the Papa John’s Pizza location near campus.

Tuesday, Feb. 24, 1993: A snowstorm that dropped more than 15 inches of snow forced cancellation of classes for the first time since the 1978 blizzard.

Thursday, Jan. 26, 1978: The Blizzard of ’78: Forecasts for that Thursday predicted blizzard conditions, but no one was prepared for the 41 inches of snow that fell over the next three days, producing drifts of up to 20 feet. Classes were cancelled for three days.

Friday, Jan. 16, 1959: The Scholastic reported that “warning bells marked the end of classes for the duration of what turned out to be the worst snowstorm Notre Dame has witnessed in many years.” Only dining hall employees and snow removal crews remained on campus after a snowfall of 15 inches.

At the time, the Scholastic article went on to say, “No one in the present administration can remember canceling classes for a snowstorm, although in the early days of the school it is unlikely that snow affected Notre Dame much since most students and professors lived on campus.”