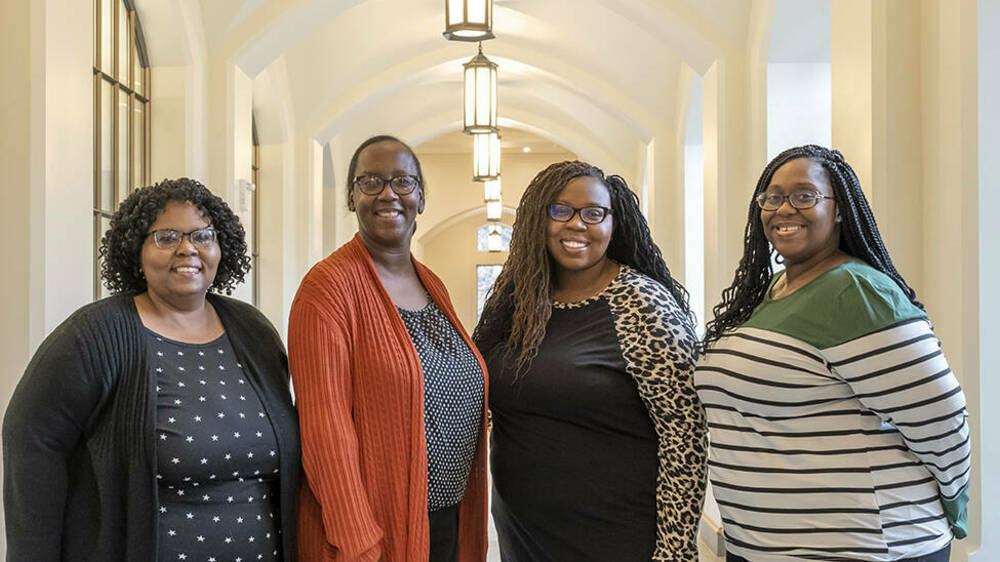 History professor Richard Pierce, a scholar on the urban experience of Black people in 20th-century America, did not set out to create Notre Dame’s first Employee Resource Group (ERG). He simply saw the need for an affinity group for Black faculty and staff, which he co-founded with colleague Rev. Hugh R. Page in 2004.

“There were African American professors and staff who found themselves to be the only one in their department; managers who were the only one in their unit. There was loneliness and fatigue. They felt unsupported in their work, challenged for their authority and otherwise questioned about their abilities,” said Pierce, who joined Notre Dame in 1996.

Pierce recalled that some Black faculty and staff were literally searching for community — knocking on his door and the doors of other Black faculty, in need of a listening ear.

“We felt there was an opportunity to join collectively and share our stories, provide peer support and strengthen each other and offer solace,” Pierce said. So a group was formed and began meeting monthly in a banquet room at the Morris Inn.

“It’s good to be in a room of fellow travelers, sharing a cup of tea or a cup of coffee, just letting your hair down in a safe place. It’s meaningful,” Pierce said.

Friendships were made. A community was formed.

In 2014, the group became more formalized as the Black Faculty and Staff Association (BFSA), creating a charter, bylaws and a board. Pierce served as president for several terms.

In 2017, the group voted to become an ERG, sponsored by Human Resources. Pierce had reservations. He was concerned the authentic feeling of community could be lost.

While HR terms like networking, professional development and advancement may come up more during BFSA meetings than in the past, Pierce understands such efforts help the University retain Black talent. He noted, however, that faculty and staff who move to South Bend to join Notre Dame need community more than anything.

“Retention was one of the things we were trying to achieve — retention through community,” said Pierce, who sits on the BFSA board as a past president offering current leaders historical perspective.

Much like when the group formed in 2004, Pierce said there is a continued longing for community among Black faculty and staff at Notre Dame.

That was clear in May 2020 following the murder of George Floyd that led to rising racial tensions across the country. Once again, BFSA provided a safe space to talk, this time over Zoom instead of in a banquet room as most faculty and staff were working from home due to the pandemic.

“People shared their hurt and pain. It was a throwback to previous times, the community aspect of it,” Pierce said. “We also laughed a lot. We told jokes, maybe to cover the pain. The African American community has endured lots of episodes of pain and so we’ve developed coping mechanisms over the generations and laughter is one of them. So the BFSA taps into shared intergenerational comfort mechanisms that allow for survival.”

Brianna May, a senior financial aid counselor, had just started her two-year term as president when BFSA initiated the weekly listening sessions. As the weeks went on, she was struck by the feeling of hopefulness that emerged. At a time when people were isolated in their homes, there was a virtual place to go to play games, laugh and share stories and information, as friends do.

“Because there’s this small community of Black people on campus, we can celebrate each other and meet some people at Notre Dame we might not meet otherwise,” she said.

At times, BFSA extends its reach to Black students, offering support when they face acts of racial aggression on campus.

“When the Africana studies department bulletin board was defaced and when chicken bones were left in the African Students Association’s mailbox, we galvanized support for those organizations and individuals. We’ve been a resource for students,” Pierce said.

The BFSA may be the best-kept secret on campus, said Cynthia Reeves, assistant director of international student and scholar affairs.

“I’ve been on campus going on 10 years and I think I was here for five or six years before I even knew about it,” Reeves said.

As vice president of BFSA, she intends to get the word out. She encourages interested faculty and staff to go to the BFSA website to sign up to receive the group’s e-newsletter and find out about upcoming events. All members of the campus community are welcome to join BFSA.