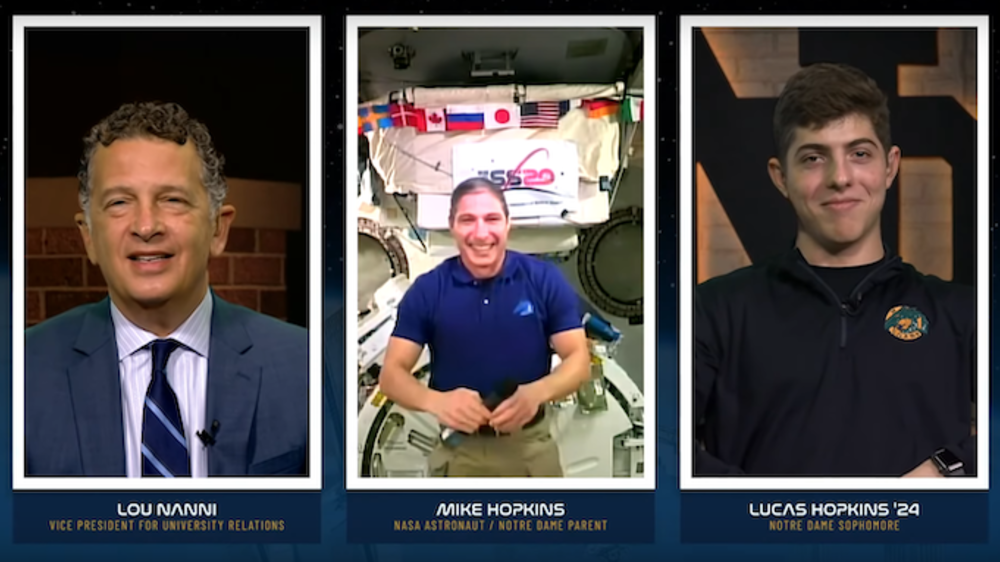 The Live Chat at Notre Dame began as part of the Department of Development’s livestream series in early spring 2020. This weekly livestream event has featured many special guests affiliated with Notre Dame in a variety of different ways.

On Wednesday, March 24, the series featured a special guest from a very unique location. Astronaut Mike Hopkins, father of Notre Dame student Lucas Hopkins, was aboard the International Space Station traveling approximately 250 miles above the earth’s surface when the conversation took place.

So how did this livestream event come together? Through the dedicated efforts of the Department of Development, ND Studios, which is part of the Office of Information Technologies (OIT), and the Intrepid/NASA team in Houston, Texas.

“It started with a phone call from the Development office to see if ND Studios could host a private conversation with Commander Hopkins and about 75 viewers,” Dan Skendzel, executive director of ND Studios said. “It ended up being a public livestream event with almost 10,000 live views on Facebook, YouTube and Twitter, plus local television stations. From a broadcast standpoint, our technical team worked diligently to find, configure and test the right equipment to ensure this event’s success.”

The plans for this historic event started in July, 2020. “I heard of a student whose dad is an astronaut. He was part of a team of astronauts that were going to work on the International Space Station,” said Jim Small, associate vice president storytelling and engagement.

“When I reached out to Commander Hopkins about being a guest on the Live Chat at Notre Dame series, he was interested in taking part. That’s when the real work began,” Small said.

Hopkins left Earth in November to spend six months on the space station.

The next step was to contact the Intrepid/NASA team to start making plans for the interview. According to Small, the NASA representative first told him the event should only have up to 75 attendees. But as conversations continued, he was able to broaden the event to a larger viewing audience and feature it on several streaming platforms and local broadcast stations.

What the audience saw was virtually seamless. But behind the scenes is where the real action took place.

Key technology for the event

The timing of this event was important. The space station orbits Earth at an average altitude of approximately 250 miles. It travels at 17,500 mph—which means it orbits Earth every 90 minutes. Astronauts can have private and public conversations, but they can only take place when the space station is in the correct position to connect to both the satellite and ground control.

ND Studios contacted the NASA staff to determine the equipment needs for this live-streamed event. According to Eric Nisly, live stream engineer, ND Studios needed to set up a point-to-point video call over the Internet which required video conferencing technology that would match NASA’s equipment.

“For these types of events, NASA uses a Cisco SX80 Video Codec box,” said Nisly. Tom Marentette, IT solutions architect & streaming program manager, ND Studios, found the exact model in a campus video conference facility, which was not being used. He needed to revive this legacy unit and install a new software application to get this functional for the event. Mike Sill, video engineer, ND Studios, configured the cables to set up a video feed in and out of the unit. He also programmed the video router settings so the unit would work with the ND Studios infrastructure.

The ND Studios team reached out to the Notre Dame Law School to assist in testing, as the IT staff in that location uses similar videoconferencing technology. ND Studios borrowed some equipment to see what they needed to do to get their unit to work. After working on it for some time, they came up with three different possible solutions, but none of them worked, and time was running short.

It was little over a week before the event, yet the ND Studios team was not deterred. Nisly reached out to Bill Mountford, manager of OIT Telephony Services, who manages Cisco services at the University. His Cisco representative also happens to be the person who works with Cisco’s NASA account. After reaching out to the Cisco representative, he was able to help ND Studios team configure the equipment for the upcoming event.

Not only did the configuration of the Cisco video box need to work, the audio and video cables needed to be properly connected as well to make sure the transmission worked both ways. Days before the event, ND Studios scheduled a time with NASA to test with equipment, and everything went as planned.

The day of the event, when ND Studios and NASA tested everything again and discovered a glitch in the audio feed. During the microphone check, the ND Studios team heard their own voices echoing back through the speaker. The audio feed from NASA in Houston was not coming through, which meant the audience would not be able to hear Hopkins talking.

The ND Studios team considered possible solutions and reached out to the Cisco representative again, and he helped correct the issue just an hour before the event began.

“With all of the approvals to make this event happen, the technology challenges and making sure  the right people were in the right places, the livestream went very well,” said Small. “It was well received by the Notre Dame family. We received more positive comments on this Live Chat at Notre Dame than others we’ve hosted.”

Not only was the event successful, but Hopkins’ son, Lucas, was in the studio during the interview. Once the main part of the interview concluded, Luke surprised his dad by saying hello to him. Though the astronaut had no video during the conversation, the audience could see his face light up when he heard his son’s voice.

The recorded interview with astronaut Mike Hopkins is available at: https://youtu.be/kvFNQ644CBU

Originally published by Lenette Votava at studios.nd.edu on April 22, 2021.