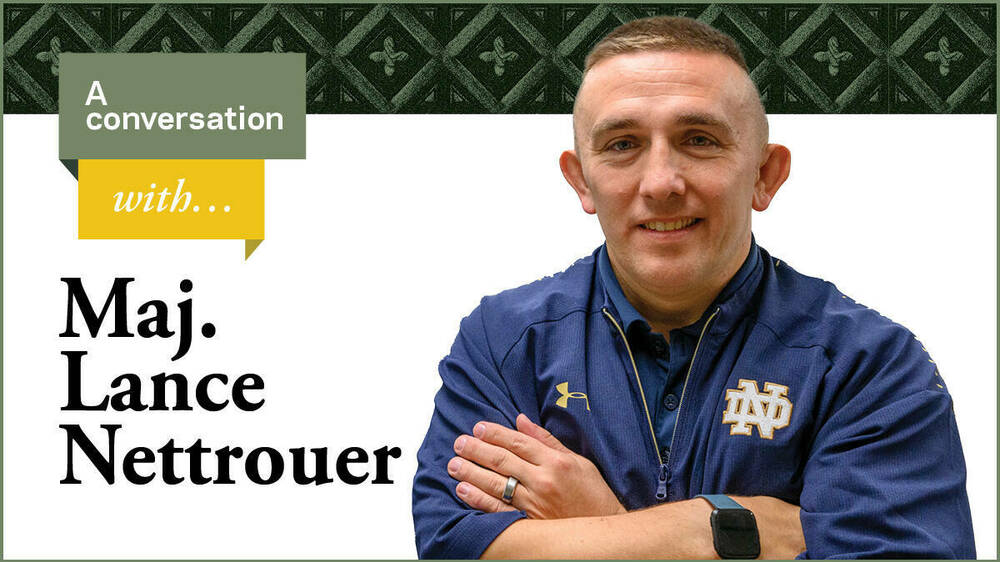 Maj. Lance Nettrouer is the academic and veteran compliance specialist for the Office of the Registrar. He ensures that study abroad pro-grams are academically compliant and that degree programs have been approved by Veterans Affairs for students using GI Bill benefits. He served for six years in the United States Air Force including tours in Baghdad and Tallil, Iraq, and Kandahar, Afghanistan, prior to attending Holy Cross College and receiving a bachelor’s degree in liberal arts. He attended Indiana Tech where he received an MBA. Nettrouer is currently an officer (O-4 Major) with the Air National Guard.

NDWorks spoke with Nettrouer about his life in the military and his work at Notre Dame.

Tell us a little about yourself. Where are you originally from?

I was born and raised here on the south side of South Bend. We lived above my dad’s plumbing business for the first five or six years of my life, before we moved to a proper-size house. I had two older brothers and a younger sister.

Did you enter the military before going to college?

When I graduated high school, I got accepted to IU and my dad and I went to Bloomington for orientation week. On the tour, we were shown everything. In a dining hall the tour guide said, “This is where you can go and you can have all of your meals. You can pick a variety of things.” I asked, “Well, how do you pay for this?” He answered, “It’s rolled into your tuition — with your loans.” I looked at my father and he looked at me. We weren’t comfortable having debt. So, I said, “You know what? I’m gonna go into the military, gain some experience before I obligate myself to this.” I didn’t feel like I was mature enough to know exactly what I wanted to do. When I went through the military, it challenged me to do things

I normally wouldn’t have to do for myself. So when I came out, I was better prepared.

Do you have family members who also served in the military?

My father and my two older brothers were in the Navy. When I told my father that I wasn’t going to go to IU, he said, “Well, you sure as heck aren’t going into the Navy. You’re going to go do your own thing.”

What made you choose the Air Force and what did you do?

I went into the Air Force in intelligence because it was more of a no-pressure recruitment. And the job titles that they had sounded very exciting. Specifically I went into satellite imagery.

Tell me a little more about your military career.

I started out at Offutt Air Force Base in Nebraska. While I was there, I deployed to Baghdad when I volunteered to fill a vacancy in a position. When I got off the plane an Army colonel asked me what I did. I told her imagery analysis. She told me I would be doing human intelligence — reading through email traffic, looking for clues about people we were tracking. It was a completely different experience for me. I got a chance to work with the Army, Navy and Marines. It was exciting for me as a young airman to be in a joint unit like that.

What happened after that?

Have you ever heard of UAVs?

A UAV is an unmanned aerial vehicle, an MQ-1 predator. It’s this plane that flies without a pilot. I was not a pilot; I didn’t fly it. I was the sensor operator. I controlled every-thing else. That was really exciting because there was no schoolhouse — it was basically us with some civilian instructors.

What did the UAVs do?

They started out as surveil-lance. But they did find that it was very beneficial to have them as an emergency support. So let’s say a UAV is flying over, providing video, right? And somebody — us or an ally — is in trouble. Well, in the past you’d have to make a phone call, have a pilot run to a jet, fire it up and then get out there as fast as possible. Well, the UAV is already up there all day anyway. It just turns, points and defends. And then after it’s done doing that, it goes back to its original job. I spent my last two years of active duty in units like that.

How long were you in the military?

I was in the military on active duty for six years and nine months. And then immediately afterwards I transitioned into the Air National Guard where I’ve been for 21 years.

Did you enjoy your time in the military?

Absolutely, 100 percent. And I tell people I even enjoyed the times where it sucked. I truly benefited from having good supervisors and bad supervisors. I can remember having a supervisor that only cared about getting the bare mini-mum done, and I said to myself, I am not going to be like that person. Nobody’s motivated to go work for them. And then I’ve had really good supervisors and so it’s just experience.

And when and where did you end up going to college?

I visited Holy Cross and two other colleges. I had already completed an associate degree while on active duty. Being a bit older and savvier, I went to Holy Cross and I gave them my transcript and they said,

“We’ll give you 15 credits.” Well, the chair of the business school heard me haggling and he called us both into his office, reviewed my transcript and gave me 60 credits. I knew that would allow me to have more resources if I ever wanted to get a master’s degree.

Did you use your military benefits?

I did. All the way until they were completely exhausted.

How did you come to work at Notre Dame?

My father-in-law works in maintenance and told me about an opening for a supervisor in building services.

And how did you come to your current position?

Perseverance. Most people wouldn’t be proud sharing this, but I applied to 17 different jobs here before I got accepted into the registrar’s office. The position description mentioned the GI Bill and I had learned so much navigating my GI Bill. I wanted to be able to help other people understand it too.

How did your experience translate to your current position?

There are so many different types of people that come wanting to use GI Bill benefits. And they have their own assumptions. A lot of veterans aren’t even going to apply to Notre Dame because there’s a misconception they either can’t afford it or won’t be accepted. Honestly, I personally fell into that mindset, too, and that’s why I want to fight that misconception and get more veterans to apply.

I remember thinking, how am I going to get back into the mindset of college? I’ve been working, right? And so that’s where the partnership with the Office of Military and Veterans Affairs (OMVA) comes in.

What does it do?

OMVA has programs like the Warrior-Scholar Project and the March to Success program that help veterans with all of those concerns. For many people who haven’t had family members go through the process themselves, they don’t know what it’s like at all. So the first stop is the OMVA.

It’s my job in the registrar’s office to provide information to parents and students so they understand that no matter what program they pick at Notre Dame, the only thing they’ll ever really be responsible for is a tiny portion of room and board. It’s no longer a financial decision if you want to come to Notre Dame. It’s a, “Do you feel inspired by what Notre Dame stands for? Do you want to be a part of that?” decision.

How do you get a student to that point?

I guide the student through what it all means for tuition. For example, through the Yellow Ribbon Program, whatever the VA doesn’t cover, Notre Dame will split the difference. When it comes to room and board, I remind them that the VA will give them a monthly housing stipend.

What drives your passion for bringing students to Notre Dame?

As I view it, these students are going to be leaders in our community and the world. There’s this Greek historian, Thucydides. He said, “The society that separates its scholars from its warriors will have its thinking done by cowards and its fighting done by fools.”

It just hits home. It means that we want the people who have influence in our society to also have the perspective of the individuals that have to carry out those policies, whether it affects national defense or the economy.

Thank you for your service to our country. What does ser-vice to Notre Dame mean to you?

Service to Notre Dame is giving the students my best effort. In my role within the registrar’s office, I’m serving students in that capacity, either helping them out financially or helping them out academically by making sure they are satisfying their requirements.

Service to Notre Dame is under-standing that the students are the reason why we’re here. Everyone who works at Notre Dame in some fashion impacts the student experience. We help them get the educational experience that we’ve promised — to reach their end goal. And that’s graduating and representing Notre Dame in the world.