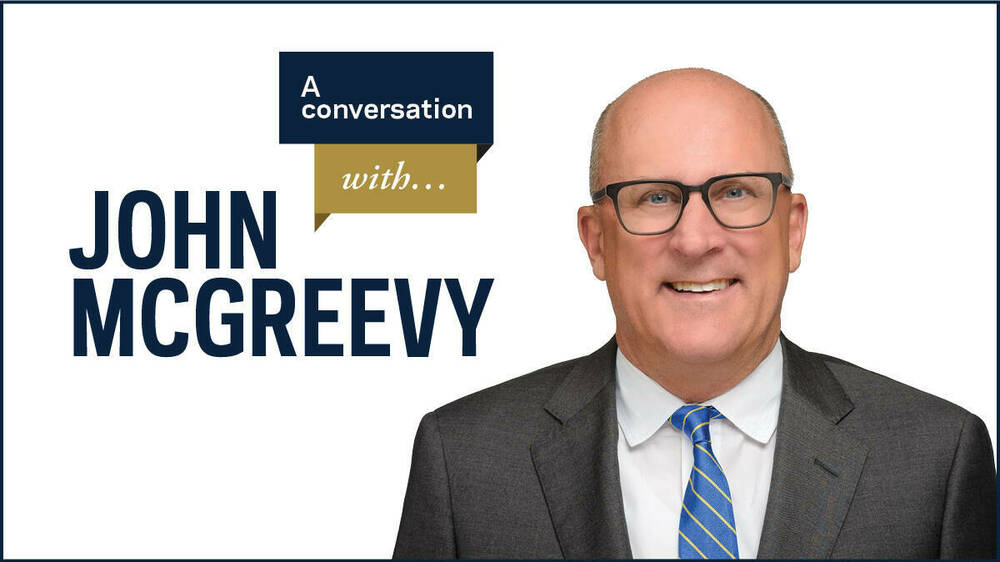 To John McGreevy’s surprise, the history of Catholicism has become a hot topic as of late. But then, perhaps it always has been. In his latest book, McGreevy, the Charles and Jill Fischer Provost, explores how we came to this point, and what challenges the Church faces now. This extended conversation on the subject starts at the very beginning — with an inspiration to dive into a wide-ranging and emotional topic.

What inspired you to write a global history of Catholicism?

So, this is not a book I could have written 20 years ago, but this was the right moment for it.

When I started out, I never thought I would write four books on Catholicism. I really began just out of an intellectual interest. I was at Stanford when I wrote my first book on race relations in the northern cities and the Catholic dimension of that, bringing religion into the story. But it was also really focused on race. And from there, it evolved into a deep interest in the history of Catholicism, which has become, much to my surprise, a hot topic.

There are so many historians from all backgrounds here at Notre Dame and at other institutions writing on the history of Catholicism in China and in Chile and in Poland. The book is needed in that sense because no one had tried yet to synthesize all this great work. There is also a trend toward teaching classes on global Catholicism, and I’d love to see more such classes. My hope for this book is that it’s not the end of something, but the beginning of something.

What are your goals for the book?

One goal is to make sure that historians and scholars understand the importance of modern Catholicism for global history. Global history has become more of a focus, and I think that’s a good thing. It’s important to not just examine the history of the nation-state. Catholicism is the most multilingual, multicultural institution in the world, and I wanted to explore how we fit that into our historical narratives.

And then there’s a personal dimension to it. I’m Catholic. I’ve been working in this Catholic institution with wonderful colleagues, and, you know, I often just wonder, how did we get here? We’re in an unusual moment in American history and global history and Catholic history. How did we get here? That’s what this book is about.

This is the first time you’ve written a book while also teaching a course on the same topic. How did that affect your research process and the book itself?

It was great fun. We have such good students here. I taught the global Catholicism course three times to undergrads, and I had three research assistants who came out of that class who were wonderful. And I was thinking through the challenges of the course — like, how do I make this accessible? How do I get students to have a sense of change over time? — just as I was thinking through the same challenges for the book, which was helpful. We also had great discussions in the classroom with students who had experiences with Catholicism outside the United States.

In the book, you address many of the challenges the Church has faced between the French Revolution and now. What would you say is the biggest challenge for the Church today?

That's a tough one. Even though we don’t necessarily see it, the number of Catholics is growing worldwide — primarily in the Global South, in places like the Philippines and sub-Saharan Africa and parts of East Asia and India. But in North America and Europe, there’s a real crisis of affiliation among young people. And I think we need to find new devotional forms, new institutional forms, that will attract them. So in Western Europe and North America the biggest challenge might be, “What will speak to young people in the 21st century?” And Catholics aren’t alone in that; other religious traditions struggle with that, too.

The second challenge — and opportunity — is what I begin the book with. It’s how to ensure that this global institution continues to thrive. It’s important not just for Catholics, but for everyone that it does.The world desperately needs institutions that aren’t rigidly ideological, that cross national borders. At a time when we see national tensions increasing in our world, along with global crises like climate change that cannot be solved by one nation-state, Pope Francis is strongly urging international cooperation, and he’s right to do that.

You included a quote near the end of the book from Pope Francis, saying that we are not so much in an era of change as a change of era. What does that quote mean to you?

I love that quote. It’s not an era of change. It’s a change of era. And it can be hard in a change of era to figure out where you are, but I hope this book can serve as a baseline. I said in the introduction that Catholicism will be reinvented in the 21st century. I’m sure of that. And we may not be here in 2100 to see that, but I am absolutely confident that it’s happening as it did in the 19th century.

What do you think is next for the Catholic Church? Where does it go from here?

You know, I’m a historian. So, we’re not very good forecasters. So, I truly don’t know, but I’m a strong supporter of Pope Francis, and I hope the direction that he’s set can be followed. In terms of social issues, Pope Francis is continuing a great Catholic tradition of working beyond the nation-state. He is focused on climate change and the environment, which is a global issue — what we do here in the United States affects people in the Amazon. And he focuses on migration and refugees, which is of course a global issue, too.

What do you see as Notre Dame’s role in the Catholic Church?

I think it’s a big role. Catholic universities are an incredible resource for the Church. If you didn’t have a place like this for people to think and do research and explore the issues we face, the history and sociology of this institution, you’d be very impoverished.

I’ve said before that Notre Dame is perhaps the most interesting experiment in American higher education, and it perhaps has the most influence of any Catholic university in the world. In that sense, the stakes are high here. We have a real responsibility to be, first and foremost, an excellent research university, but also a responsibility to be the best Catholic university we can be. And that’s a good thing for Catholicism, but also a good thing for the world of universities.

Read more about McGreevy’s book, “Catholicism: A Global History from the French Revolution to Pope Francis,” in the full story by Carrie Gates.

"A conversation with..." is an NDWorks series where an editor asks questions of a faculty or staff member related to their position and, often, a noteworthy experience.

Read more A conversation with… stories