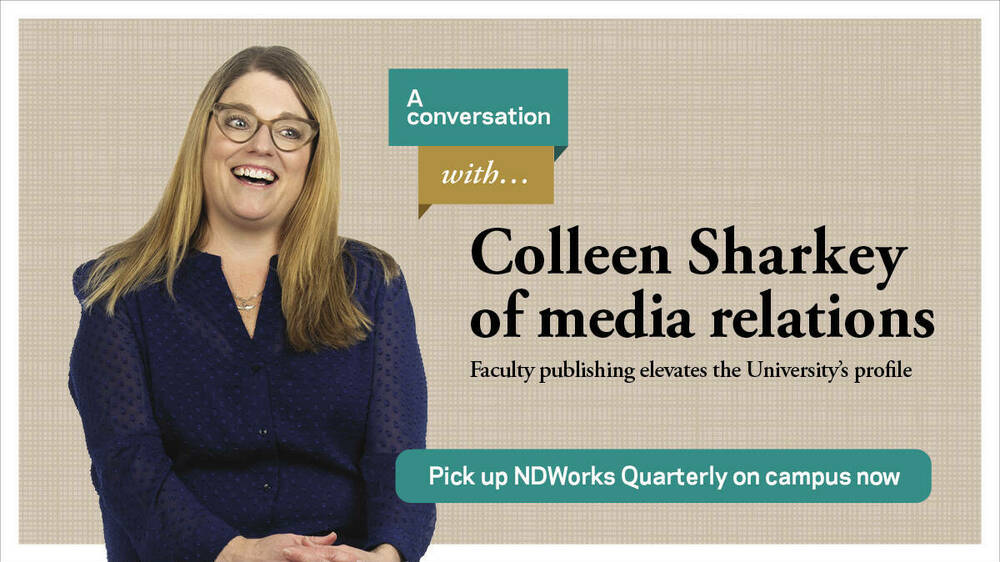 Colleen Sharkey, assistant director of media relations, writes news releases and feature stories and pitches Notre Dame experts to the news media. Her beat includes the Departments of Psychology, Sociology, Anthropology, Political Science and Economics, as well as Notre Dame International and the Keough School of Global Affairs. NDWorks spoke with Sharkey about the inter- section of faculty publishing and media relations.

NDW: How long have you been in the field of media relations?

CS: Going on 21 years. I started covering space science at NASA’s Jet Propulsion Laboratory in Pasadena. Then I went into academic media relations proper at Occidental College in Los Angeles, which is the alma mater of Barack Obama; he attended Occidental for two years before transferring to Columbia. I then went back into space science at the European Space Agency writing about the Hubble Space Telescope in Munich, Germany. Before coming to Notre Dame in July of 2018, I worked at Central European University in Budapest, Hungary, for six and a half years.

NDW: In what types of publishing are faculty involved?

CS: There’s the phrase “publish or perish” and that’s generally aimed at professors who do not yet have tenure. The idea is they need to publish a lot in order to gain tenure. The phrase also applies to tenured faculty, but the pressure to publish constantly is likely not as intense once they’ve earned tenure. Different universities have different rules about what counts for tenure.

Professors want to publish in peer-reviewed academic journals. Having a paper peer reviewed is part of the scientific process. A paper is sometimes based on joint research. For example, you might see a paper that’s written by two Notre Dame professors and one from Yale — people they’ve met along the way who have similar research and they decided to work together. Some papers have many authors.

Often when an academic gets their doctorate, they turn their dissertation into their first book. They perfect the manuscript and submit a book proposal to an appropriate publisher, which would likely be a university press. Different university presses have different specialties. (See cover story on pages 4-5.) Editors at the press decide if they will accept the proposal or not. Then the edit- ing begins. The process takes a long time. It could take years before it’s published.

On occasion, a private publisher (e.g., Penguin Press) takes interest when professors’ work meets the interests of a mainstream audience.

NDW: Do you write news releases on books or papers being published?

CS: We write about the research that goes into the book or the paper, and the subject matter has to be news- worthy. I will read an abstract or an introduction to a book and have a discussion with the professor who wrote it. If, as a media relations professional, I can connect the subject to some- thing already going on in the news or expected to be or if there is an anniversary coming up, like the 20th anniversary of 9/11, then it may be some- thing to pitch to the media.

NDW: Can you offer an example of including a published work in a news release?

CS: In January 2020, Cambridge University Press published the book “A Century of Votes for Women: American Elections Since Suffrage” co-written by Christina Wolbrecht, a professor of political science and the C. Robert and Margaret Hanley Family Director of the Notre Dame Washington Program, and Kevin Corder, a professor of political science at Western Michigan University. I wrote a news release about the research that led to the book, which dispels the illusion of the homogenous “woman voter.” Wolbrecht and Corder show how changing political, social and economic realities swayed votes and how assumptions about women as voters influenced politicians, the press and scholars.

With news, timing is everything. The book was published in 2020, the centennial anniversary of the 19th Amendment. It was also a presidential election year. I pitched Professor Wolbrecht throughout the year and she was featured in major outlets like Wall Street Journal, Washington Post, Newsweek, CBS News, Ms. magazine, VICE, Smithsonian Magazine and Marie Claire.

NDW: How do you use published works in everyday news pitches?

CS: One way is through subscriptions we have to services that connect journalists with media relations professionals. We receive daily digests that alert us to stories journalists from various outlets — like the New York Times, Washington Post, USA Today or more niche publications— are working on and the type of experts reporters are seeking. If I have a professor who would be a good fit for a story, I send the reporter any- thing a professor has done that helps explain their research, which could be links to a news release related to a book or paper, an op-ed, a blog or a “What Would You Fight For?” video.

We also have established relationships with some reporters, and we might directly email/call them to pitch our expert and/or her/his research if it’s particularly newsworthy or if we think we could entice the reporter to write about it.

NDW: How do news hits help the University and a professor?

CS: When our experts appear in the New York Times, and the Washington Post, and when they’re interviewed on national television, it underscores the world-class scholars teaching and con- ducting research at Notre Dame and the caliber of academics here. It further strengthens Notre Dame’s reputation as a university with faculty who make meaningful contributions to the national and global dialogue on important issues of the day.