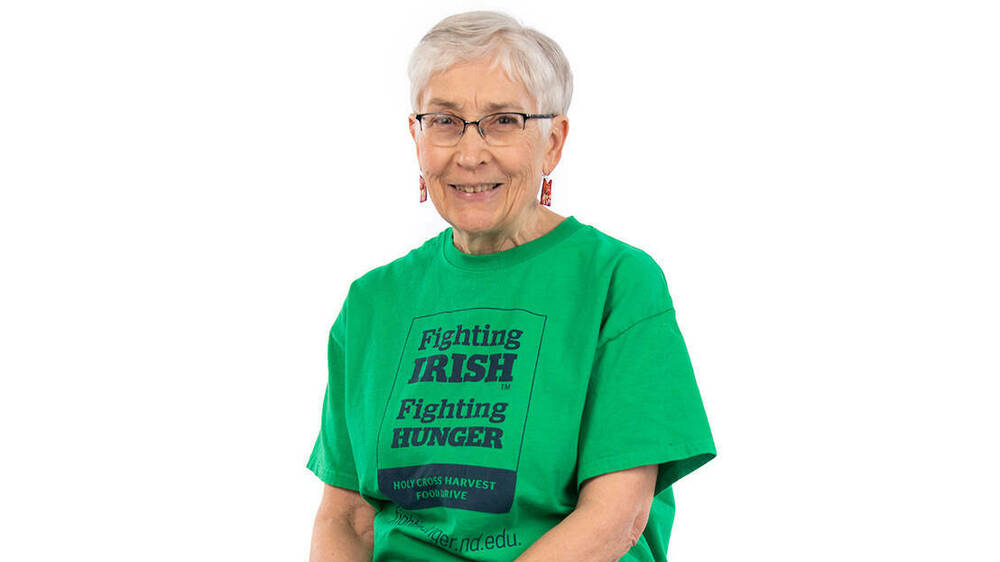 Anne Kolaczyk, lead technical training professional in OIT, has worked at Notre Dame for 32 years and will be retiring this summer. She has volunteered with Fighting Irish Fighting Hunger (FIFH) for the past 10 years. FIFH is the campus-wide food drive that works to alleviate hunger in the greater Michiana area. It currently partners with People Gotta Eat and the Food Bank of Northern Indiana. This year’s food drive will be April 1-30.

What other positions have you held at ND?

I did publications for the College of Engineering for nine years and then moved to the Office of Information Technologies as a technical editor in their training group. From there I became a trainer and then a lead of the group.

What are your current position responsibilities?

I create courses, teach them, handle registration in Endeavor, answer training questions and think up new ways to present technical training to campus.

What is the best part of your work?

The best part is the challenge of finding new ways to meet the training needs of campus. We started Taste of Technology a few years ago as a tech conference for campus that focused on new software, features and technology. The format evolved due to COVID. Taste of Technology had been made up of in-person sessions offered over two half-days; now we hold three Zoom sessions a week over the course of a month. Fortunately, we’re reaching even more people with the new format. We also started Time-Out for Tech to offer really short training sessions to keep people up to date on changes in the software we use all the time.

How did you get involved with Fighting Irish Fighting Hunger?

For years, I was head of the Catholic Mission team in OIT, and we’d do community service and hold food drives throughout the year. Then in 2010, there was an effort to consolidate all the food drives on campus and I was asked to join it. That first year, it was called Holy Cross Harvest and was held in November in conjunction with Saint Mary’s and Holy Cross Colleges. Though the drive was moderately successful, each school had different times that would work best for their next drive, and so we split apart. I was asked to lead the effort at Notre Dame.

How long have you been involved with FIFH?

I have been running the drives since that second one, which was in 2012 — 10 drives all together that have raised $260,000 for the Food Bank of Northern Indiana and the United Way coalition of food pantries, People Gotta Eat. That’s the equivalent of around 2 million meals for the hungry in our area. And that doesn’t count the 15,000 pounds of food that was also donated.

How has the drive changed over the years?

The timing of the drive has changed the most. We moved from that original November time frame to January for a few years and then to September. But when the Meals with Muffet drive started in September 2020, we decided to move the Fighting Irish Fighting Hunger drive to the spring, starting with this coming April.

What hasn’t changed is that the volunteers in the departments are the backbone of the drive. I just coordinate things, provide posters and email templates and deposit the money, but the volunteers run events in their departments, or just ask people to write checks. They are the ones that really have made the difference for so many in our area over the last 10 years.

Why is FIFH important to you?

I have always felt that we here at Notre Dame are so blessed. We have good jobs and an employer that cares about us. Yet in our area, so many other people are struggling, even more so during the pandemic. Almost 90,000 people in northern Indiana don't get enough to eat; 29,000 of them are children. That means one in every four children goes to bed hungry. How can we look upon our brothers and sisters in need and not help them? How can we live with ourselves if we ignore their suffering? I don’t believe God gave these blessings to us to hoard but to share.

What does the future of the drive look like?

The future of the drive depends on the commitment of the volunteers. Their numbers have dropped over the last year and we really need new people to step up. Anyone interested can find out more at fightinghunger.nd.edu or by emailing fightinghunger@nd.edu. The other change coming is that this April will be my last drive as I’m retiring this summer. But I’m really pleased that Whitney Young of the Hesburgh Library is working with me and will take the effort over once I retire.