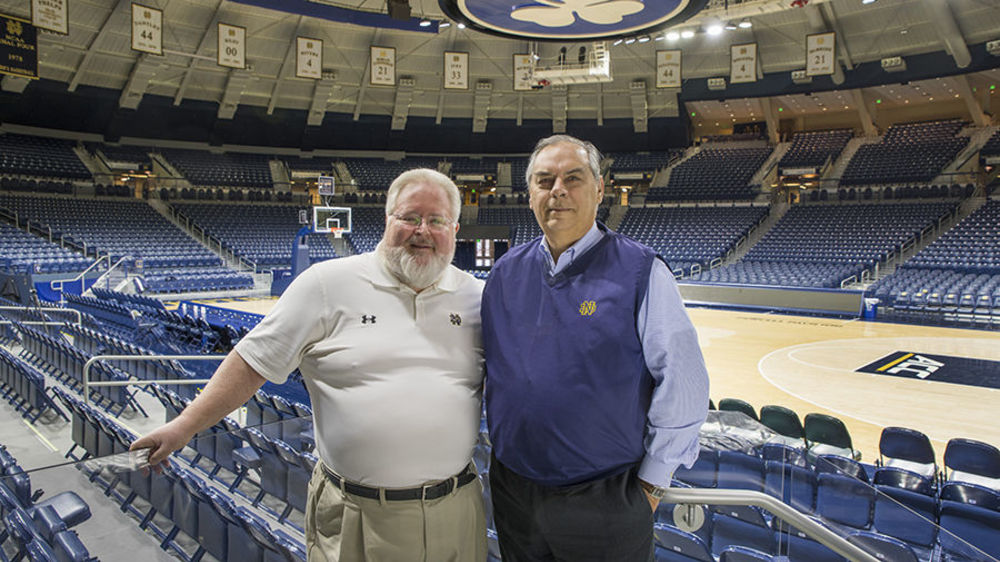 There was no formal observance or big celebration to mark it. As the backdrop of many historic events at Notre Dame, the place has seen plenty of hoopla over the years. No need for fuss.

Athletics marked the occasion with a website, joyce50.nd.edu, which celebrates 50 memorable moments at the Joyce — anything from sporting events to Commencements to memorials to concerts.

Since NDWorks tells the stories of people who work at Notre Dame, the editorial staff thought it a fitting tribute to interview a couple of guys who worked many of the center’s biggest events over the past half-century. (Pictured above are Tom Blicher, left, and Mike Danch.)

A conversation with … Mike Danch and Tom Blicher

When the Joyce Center made its public debut Dec. 1, 1968, the place was known simply as the Athletic and Convocation Center.

If the no-nonsense name didn’t pique people’s interest at the time, the architecture did.

Quite a compliment. The Astrodome, opening just three years earlier, was an architectural and technological wonder as the first domed and air-conditioned stadium.

“The square footage of the ACC was purportedly even larger than the Astrodome, and we had two domes,” boasts Mike Danch, retired associate athletic director of athletic facilities.

In 1968, Danch was a year out of school, graduating from Notre Dame in 1967. He was an advertising rep at the South Bend Tribune and the ACC was one of his accounts. Working with Joe Sassano, the first assistant director of the ACC, Danch placed the ads for the opening week of events.

“The week was called Performance Maximus,” he says. The programming not only entertained but also demonstrated the versatility of the space.

“There were tours of the facility for the campus community and the public. There was a show with Andy Williams, Roger Miller and Henry Mancini and His Orchestra,” Danch recalled. “The week concluded with the long-awaited basketball game with UCLA, coached by John Wooden, who had coached at South Bend’s Central High School. Notre Dame’s Austin Carr was a sophomore.”

“Carr almost single-handedly beat UCLA,” he says. “Their players were so frustrated that they couldn’t guard him, they actually complained to (UCLA) coach John Wooden about it.”

Easy to understand why the ACC was dubbed “Austin Carr Coliseum.”

The ACC got a new name years later, but not to honor Carr.

In 1987 when the Rev. Edmund P. Joyce, C.S.C., retired after 35 years as executive vice president of the University, the place became the Joyce ACC. By that time, Danch had been working in the ACC for 15 years, starting in 1972 as events manager, hired by Sassano and John Plouff, the building’s first managing director.

If Danch had to pick a favorite story about Father Joyce, it might be of him and the Rev. Theodore M. Hesburgh, C.S.C., president of Notre Dame, learning to ride mopeds behind the Joyce.

“The two of them were retiring at the same time and famously said that they were going to take this grand tour away from the University for a year. So someone had given them these mopeds but they needed to figure out how to ride them,” Danch recalls.

“So after their (farewell) Mass with students, they got onto these things with their sunglasses on and helmets, and they rode down to South Quad where there was a big picnic for students by Rockne Memorial. Oh, man, the kids loved it.”

Danch likens the Joyce to a circus tent. “Using your imagination, you could kind of do anything you wanted in terms of events under this thing.”

Danch thumbs through a yellow legal pad with 25 pages of notes he had gathered for the interview. He neatly prepared a list of all the concerts, entertainment and presidential visits he could come up with, even consulting friends from back in the day, like Blicher and Notre Dame football public address announcer and former local news anchor Mike Collins.

“Because the ACC was new and our arena was fairly large — it seated about 11,400 — a lot of the concerts would pass through here,” Blicher reminisces. “Later other arenas got built so the competition became greater because there was just a larger audience capacity elsewhere. But we had a lot of terrific concerts.”

Yep. Garth was here well before the sold-out show in the stadium last October.

“Garth was here in 1994,” says Danch. “He was a big football fan and followed Joe Montana when he was in college. One of his people asked if we could arrange for a tour of the Joyce Center and our memorabilia, and so I said, sure, I’ll come down after rehearsal. So I went to the dressing room and Garth comes out and I’m waiting for security or his entourage or somebody to be with us, but it was just him and me. So we talked and we walked around the upper concourse area and I told him some of the history of what was depicted up there.”

They had some company.

“As we were walking, these two ladies were kind of following us. So Garth turned around and said, ‘Ladies, how are you? Where are you from?’ They were from Ohio and had come for the concert. So he signed whatever they had and we kept going. He’s just a nice, down-to-earth guy.”

Garth performed two sold-out shows at the Joyce and Danch says they could have sold out a third if the date had been available.

Elvis was in the building more than once.

The first time was 1974. It was early in Danch’s career and his biggest event thus far.

“We wanted to make sure that everything went right because, you know, the building's reputation was on the line. If you could pull off Elvis Presley, then other things were going to come.”

It was Elvis’ first show north of the Mason-Dixon line.

“Elvis and Colonel Parker (his manager) were really concerned about ticket sales.”

But sales were so strong, they added a show.

“I remember going past one of the rooms in the back of the Joyce where Colonel Parker and this other guy were sitting at a table counting money. I've never seen so much cash in my life. And it was all from the novelty sales and the program sales. Colonel Parker had a cigar and he was almost like a carnival barker kind of guy.”

The concert that’s top of mind for Blicher is the Doobie Brothers.

Back then he was a stagehand and spotlight operator for the stagehand union. Danch would hire him years later, in 1989, to officially join the Joyce Center staff.

“These acts would come in and they would need qualified people to set up the show and operate the lights and things like that,” says Blicher.

Crews spent the day putting up the sets and suspending speakers and such from the ceiling. When Blicher returned from dinner, about an hour before the show, he noticed something.

“I looked up at the rigging and noticed that the ‘O’ ring that was holding a lot of the suspension for the sound system was starting to elongate, so it was an oval shape. Not good because it was hanging over the front rows of seats. So I made Mike (Danch) aware as people were about to come in.”

Danch delayed the concert until the entire speaker system was taken down from the rigging positions and placed at stage level so there would be no chance of any equipment falling during the show. Disaster averted.

In addition to overseeing big-time concerts and entertainment like the Ice Capades, the Ringling Bros. Circus and the Harlem Globetrotters, Danch served on the planning and facility oversight committee for eight  U.S. presidential visits during his 44-year career at Notre Dame. (Presidents George H. W. Bush, George W. Bush and Barack Obama made the list of 50 Memorable Moments at the Joyce.)

Danch says the most memorable may have been Ronald Reagan’s visit in 1981.

“Father Hesburgh, then-president of the University, invited him to be the Commencement speaker. It was President Reagan’s first year in office. He accepted and then he gets shot. So he is rehabbing. Father Hesburgh has been checking on him and it looked like he was going to be well enough to come,” recalls Danch.

“The Secret Service arrived like three or four weeks before the event and a couple of them were in my office and all of a sudden one of them grabs his earpiece and he tells us somebody just made an attempt on the pope’s life.”

So security needed to be even tighter than planned at Commencement.

“There was a bulletproof shield on the podium. We had an express route in case something happened. And the audience had to get there in advance to be searched and go through these metal detectors.”

Danch and Blicher could share Joyce stories for hours, and do occasionally as a couple of retirees, less busy than back in the day.

“Time’s gone by pretty fast,” Danch notes, “but it was a privilege to be part of Notre Dame.”